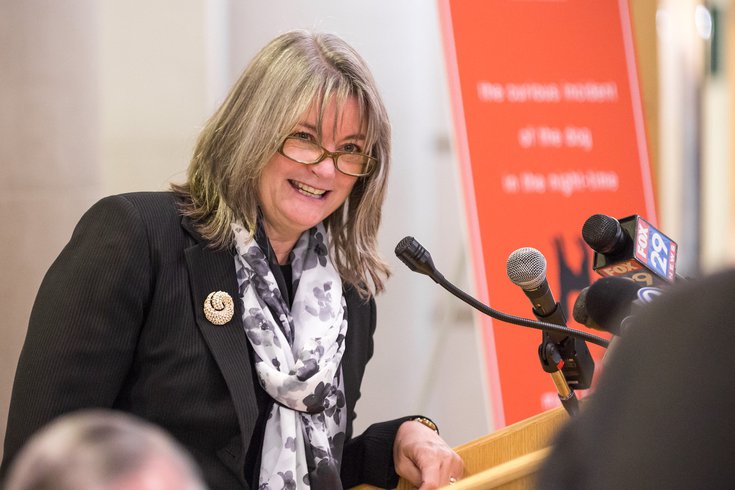 The Free Library of Philadelphia is searching for a new leader following the resignation of Siobhan Reardon. Reardon, above in 2016, stepped down following accusations of workplace discrimination.

Siobhan Reardon is stepping down as head of the Free Library of Philadelphia amid accusations of workplace inequality.

Reardon, who has served as the public library system's president and director for 12 years, submitted her letter of resignation Thursday to the chairs of the board of trustees and board of directors.

PhillyVoice reached out to the Free Library of Philadelphia for comment, but library officials did not immediately respond.

Mayor Jim Kenney issued a statement thanking Reardon for her service. He said his office will work with the library to find a successor.

"The Free Library of Philadelphia strives to be a welcoming and inclusive public space, and that mission must endure," the statement read. "After hearing calls for reform from library employees and the public, it is clear that a change in leadership is necessary during these unprecedented times.

"Our administration stands in solidarity with the Free Library’s Black employees, and the countless others who have made their voices heard. More than ever, people across the nation — and right here in Philadelphia — are demanding changes from institutions and those in power."

Black library workers detailed their concerns in an open letter posted online in late June. They called out workplace racism, income and job disparities, and a lack of COVID-19 protections for Black workers, who are more likely to become sick or die from the virus.

Additionally, the local chapter of the American Federation of State, County and Municipal Employees, the largest trade union of public employees in the United States, launched a "vote of no confidence" petition criticizing Reardon and the board of trustees.

The petition claimed "insufficient action of this administration concerning racism," citing the open letter from Black workers. Nearly 2,000 union members and other supporters have signed the petition.

Board of Trustees Chairperson Pam Dembe acknowledged those concerns when emailing Reardon's resignation letter to the board. The email was obtained by Billy Penn.

"In the last several months, events have overtaken us all," Dembe wrote. "The health consequences of COVID-19 and the long-overdue wider rage about deeply imbedded racism have brought us to a point where the Free Library, like many other institutions must make very major changes if we are to most effectively serve our employees and our patrons."