Check back for updates. We'll add to this list as more movies are announced 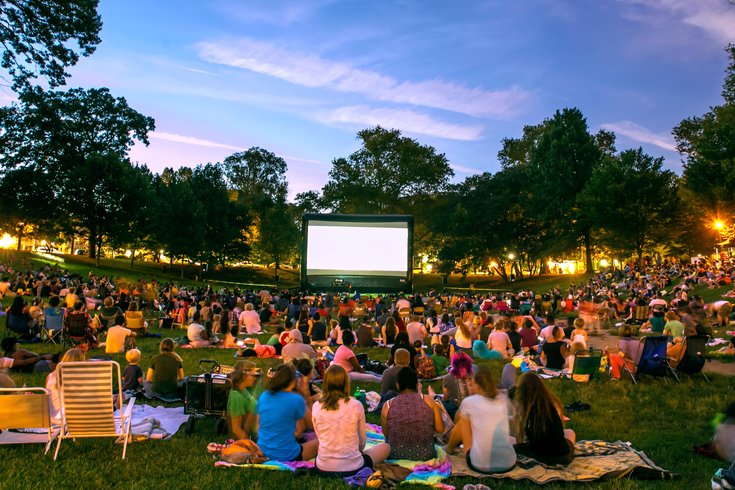 This summer, catch a free movie screening in one of Philly's charming outdoor spaces.

The lineup of films includes a mix of new releases, family-friendly favs and cult classics. "Crazy Rich Asians," "Avengers: Endgame," "Space Jam," Spider-Man: Into the Spider-Verse" and "Clueless" are only a few of the movies you can watch under the stars this season.

Below, check out our ultimate guide to all the free outdoor movie screenings. As more are announced, we'll update our list.

RELATED: Parks on Tap will visit a different Philly park each week for 23 weeks | Shop The Food Trust’s Market at Cherry Street Pier on Saturdays | Longwood Gardens bringing back illuminated fountain show for summer | Movie lineup for Cinema in the Cemetery series announced

Movie Nights on the Schuylkill Banks

The series will return in June. Movies will either be screened on the grass just north of the Walnut Street Bridge, or at Grays Ferry Crescent, on the esplanade closest to the Wharton Street and Schuylkill Avenue trail entrance.

Most movies will start at 8:30 p.m. but arrive early for free snacks and to enter a free raffle for a Philadelphia Runner gift card.

Remember to bring a blanket or lawn chair for the show.

This year's outdoor movie series in La Peg's beer garden will feature cult favorites from the '80s and '90s, organized around a different theme each month. June's theme is "Record Store Month," while July's is "'90s Throwbacks" and August's is "Unconventional Love Stories."

Also, this summer there will be Quizzo before each screening and themed cocktails. All movies will start at 8:30 p.m.

Catch a family-friendly movie in Mt. Airy this summer. On the last Friday of the month, there will be a screening at either Lovett Park or Pleasant Playground. All movies will start at sundown.

Also, on the last Saturday of the month, there will be screenings at the Trolley Car Diner on Germantown Avenue.

Screenings Under the Stars at Penn's Landing

Grab a lawn chair and head to the Great Plaza at Penn's Landing to watch a free movie at the waterfront. Movies start at dusk, which is approximately 8:30 p.m. in July and 8 p.m. in August.

This August, movies will be screened at sundown in University City's Clark Park. Bring a blanket or chair, grab a snack from one of the on-site food trucks and settle in to enjoy the evening.

Monday nights through Sept. 23, catch a free movie at the Delaware River waterfront venue chosen by one of Cherry Street Pier's resident artists. The screenings will start at 8 p.m.

During the multi-day Fourth of July celebration there will be free movie screenings. Each will have pre-movie activities starting at 5:30 p.m., then the chosen film will start at 7 p.m.

This series at Dilworth Park outside City Hall is presented by TD Bank and sponsored by "Marvel: Universe of Super Heroes" at the Franklin Institute.

Starting at 8 p.m., free popcorn will be distributed to the first 100 guests while supplies last. There will be movie trivia by the Philadelphia Film Society, too, with "Marvel: Universe of Super Heroes" exhibit tickets and swag up for grabs.

Movies in the Park

Different parks across the city will host movie nights from June through early October. Movies will start at dusk.

Movies Under the Stars in Chestnut Hill

Head to the Water Tower Recreation Center on East Hartwell Lane for movie night. Food trucks will arrive at 7 p.m., then the screening will start at 8 p.m.

Movies for Good at Cira Green

Brandywine Realty Trust, in partnership with Sunset Social, is introducing a new free movie series on the lawn of Cira Green, a public park 12 stories above street level in University City. All proceeds from the pay-what-you-wish popcorn stand will benefit a different featured local charity each month.

Movies will air every Wednesday night from June through August beginning at 8 p.m. The lineup includes '80s and '90s favorites.

On select Thursday evenings, watch a family-friendly movie at the pavilion in front of Davio's Northern Italian Steakhouse in the King of Prussia Town Center.

Screenings start at 8 p.m. and free popcorn will be provided.

DiSilvestro Playground in South Philly is launching its first community movie nights this summer. Two family-friendly films will be screened. Both will start at 8:30 p.m.