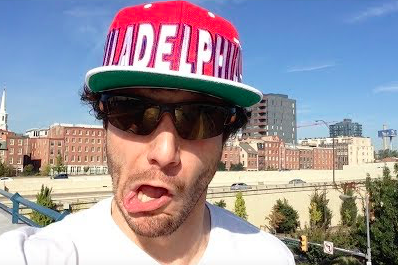 In just the past few years, Philadelphia has enjoyed a serious boom in tourism, some of it supported by major events and some just the product of years of improvement making the city a more attractive destination.

For all the money and attention Philly gets from its visitors, the boost in status also means locals are subjected to more annoying videos full of cheesesteak and Rocky cliches.

It's sort of haughty to look down on this, when you really think about it. One of the great revelations of the "Me in My State" meme that took Twitter by storm is that what you say about your hometown when you're there is different from what you say about it when you're selling its virtues to out-of-towners.

Then there are people like the "Overly Excited Tourist," who travels the United States staging immature freak outs over the common sights and scenes of big cities. The Funny or Die series is helmed by Ryan O'Flanagan, a Los Angeles-based comedian and actor who you may recognize as Mr. Kraz from the 2017 Netflix mockumentary "American Vandal."