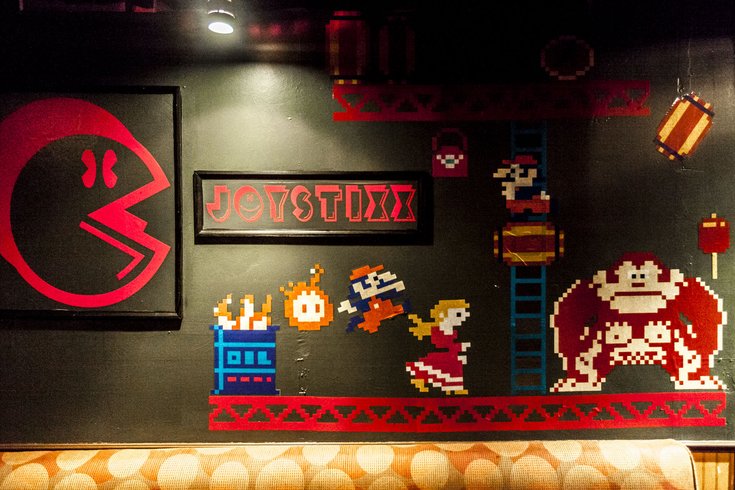 Dubbed "Joystixx," the gaming lounge will, fittingly, be set up in the basement of the bar at 200 S. 12th St., which Ian Morrison, a manager for Tabu, told PhillyVoice can hold up to 50 people. It opens later this month.

Joystixx includes a full-service bar with draft beer, three high-top tables, a Ms. Pac-Man machine, a Cosmodog machine, a PGA Tour Golf machine, a Megatouch arcade machine with more than 100 games installed, an Xbox video game system connected to a television and a projector screen to be used for tournaments on Wednesday evenings. Morrison cited "Mortal Kombat" as an example of a game the bar may host a tournament around -- though he's still weighing options.

The space will be open every day, he said, but will only be fully staffed on Wednesdays and weekends -- when there will also be pizza and gaming-themed drink specials.

The arcade-bar hybrid is a new concept for the city's Gayborhood, already home to an assortment of niche bars ranging in theme from kink to piano show tunes. It's open to everyone, but caters to "gaymers," a subset in the LGBT community notable for not always having a safe space to interact. When popular massively multiplayer online game Final Fantasy XIV announced last year it would allow same-sex marriage in its gaming world, the LGBT community rejoiced: an abundance of "gaymers" surfaced with a massive in-game Pride parade to celebrate.

The point being, plenty of LGBT people play games -- video games or otherwise -- but are often left out of the picture.

"There's this group of people who don't want to club and dance, and they just want to game," Morrison explained. "So now, rather than sitting at home, they have an option of getting out, having cocktails, experiencing gay culture, networking and getting their game on."

"We're offering something for all the closeted nerds and geeks who wouldn't ordinarily come out."

Ben Deivert, who identifies as a gaymer, told PhillyVoice he was thrilled when he stumbled upon renovations downstairs during a night out at Tabu.

"[Gayming] doesn’t seem like such a small community when you’re part of it," Deivert noted, "but it is such a small subcommunity to really find and I think, too, with it being perceived as a typical ‘bro culture,’ a lot of people don’t like to admit they're 'gaymers."

The nostalgia of wandering over to the arcade at restaurants as a kid, he said, makes the arcade-bar concept all the more attractive, Deivert added.

"If nothing else, it's a nice homage to the days of growing up."

Aside from private living-room meet-ups and an occasional Dungeons & Dragons group, there are few other safe spaces for LGBT people in Philadelphia to game together. But interest in creating them has increased recently. Late last month, Redcap's Corner, a games emporium at 48th Street and Baltimore Avenue, launched an LGBT gaming night -- for card games and board games -- on Thursdays.

Kris Zwak, who organizes that event, noted that at-large gaming communities can be predominantly "straight and white," which is partly what sparked her interest in starting an LGBT-targeted event at Redcap. That effort is made easier by the organizational tools of social media sites like Facebook, she added.

"With the rise of social media, there’s a lot more acceptance and a lot more opportunity for people to find other [LGBT] folks who share their interests," Zwak told PhillyVoice. "Part of how I have been at least trying to get people to come to our event is through Facebook and groups for queers who are looking for alternative venues for socializing, focused more on gaming or art creation -- something outside of the usual club scene."

Whether an arcade-bar might be a successful venue for that subculture to socialize and build community, she said, will be dependent on how programming evolves to bring people together -- rather than encourage flying solo with Pac-Man, only with a drink in hand.

"It is an uphill battle," Zwak acknowledged. "The predominant culture is what it is."

Additional programming and what other games Tabu's downstairs arcade will offer will depend on space constraints and how the bar evolves, Morrison said.