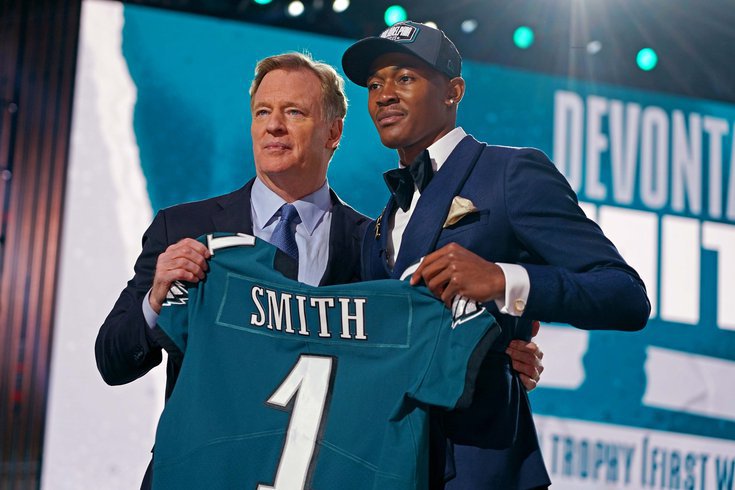 Philadelphia Eagles wide receiver DeVonta Smith holds up a jersey with NFL Commissioner Roger Goodell after he was selected by Philadelphia with the 10th overall pick in the 2021 NFL Draft.

As the dust settles on the 2021 NFL Draft, Philadelphia Eagles fans are virtually unanimous in their belief that trading up to select Alabama wide receiver DeVonta Smith was a Howie Roseman masterclass in maximizing value.

We've been over it already, but the Eagles traded with the Dallas Cowboys from No. 12 overall to No. 10 to take Smith, the Heisman Trophy winner, jumping ahead of the New York Giants at No. 11 in the process. The Giants traded back with the Chicago Bears to No. 20 to take Florida wide receiver Kadarius Toney and stash a first-round pick next year. They probably would have taken Smith had the Eagles done nothing. And on top of all that, the Eagles got an extra first-rounder next year by trading from No. 6 to No. 12 before the draft.

Draft strategy aside, both the Eagles and Giants got highly touted wide receivers in the first round. But Smith is simply in a different class as a prospect. Even a Giants fan smitten with Toney would have a hard time debating this, beyond the usual complaints about Smith's weight.

In the aftermath of the draft, Giants safety Jabrill Peppers thought it would be funny to compare two photos taken of Smith and Toney to show the difference in their expressions after they were picked by Philly and New York, respectively.

Toney's got a great and genuine smile, so there's no need to knock him for being ecstatic. But Smith? He looks focused. He looks like a guy who's been grinding his whole life, a person who gets GQ feature stories. He looks like a player who expects to be a star. He doesn't look unhappy at all. If you watch his interview with NBC Sports Philadelphia's John Clark, Smith has plenty of smiles to go around.

“I’ve heard people tell me I remind them of him. Because of the dog I have, you’re undersized, but you’re not going to back down to anybody”

-DeVonta Smith tells me Allen Iverson has inspired him

🎧Get to know the Eagles first round pick on my podcast🔽https://t.co/DyiRavBQKm pic.twitter.com/WSe8rsMlJh

A dream come true, and now the real work begins. Love my team, ready to give them everything on the field. RT if you’re with me, @eagles fans! 🏈 #NFLDraft2021 @verizon #VerizonPartner pic.twitter.com/9AAmzYsjYb

Peppers stoking the rivalry is all in good fun, but he's conveniently leaving out the part about distraught Giants fans losing their minds over the Eagles leapfrogging New York to take Smith. We already covered one man's entertaining meltdown last week. Since then, footage has emerged of a grown man punching not one, but two holes in his drywall after Smith was taken off the board last Thursday night.

This Giants fan didnt take too kindly to the Eagles grabbing Devonta Smith... Then his girl let him have it 😂😂pic.twitter.com/JRYnXm3cAL

By the way, this is what Eagles fans looked like after Philadelphia landed Smith. The difference is clear.

You think these Eagles fans like the pick of DeVonta Smith? pic.twitter.com/nivklSCa7i