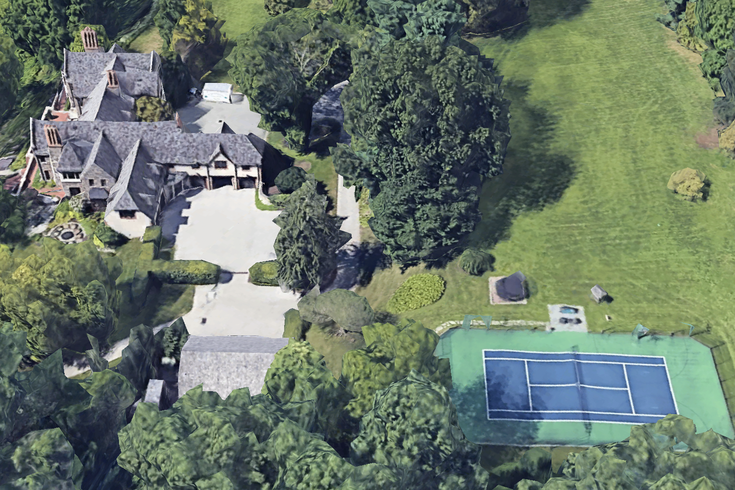 The 32-acre luxury estate pictured above in Gladwyne, Montgomery County, on Philadelphia's Main Line, recently sold for $9.26 million. The property was purchased and developed by hedge fund manager Andrew Barroway, who spent approximately $35 million to build the mansion.

That's the difference between what it cost to build a gorgeous estate in Gladwyne, on Philadelphia's suburban Main Line in Montgomery County, and what the property recently sold for after multiple attempts to fetch a higher price.

The 32-acre estate at 100 Maplehill Road was developed by Andrew Barroway, the managing partner of hedge fund Merion Investment Management and a minority owner of the NHL's Arizona Coyotes. Barroway told the Wall Street Journal he purchased the land in 2006 for $12 million, and then spent about $23 million over the next few years to construct the 13,000-square foot mansion, built in the Gothic Revival style.

It was reportedly purchased by a trust tied to the family of Thaddeus Bartkowski, the CEO of Delaware County-based digital advertising company Catalyst Experiential, which focuses on community-oriented projects. Bartkowsi told the WSJ the deal was complex, involving multiple real estate agents, and included other assets on the property that increased the final price — though he declined to say by how much.

The six-bedroom home features a gym, an indoor swimming pool, a movie theater, a wine cellar and a "souped-up man cave" with a pool table, vintage pinball machines and some quirky antiques, including a jukebox similar to the one that appeared in the 1970s TV series "Happy Days."

Outside, the property has a tennis court, a seven-car garage, a pair of hot tubs and a series of trails designed for ATVs. A guesthouse and another building that predates the mansion remain on the property, which dates to the 18th century.

Barroway only lived at the property briefly prior to a divorce with his ex-wife, who stayed at the home until their children had gone to college. Barroway now lives in Arizona, where he was formerly a majority owner of the Coyotes until selling his majority interest in 2019 to Cuban-American billionaire Alex Meruelo. Barroway still holds a 5% interest in the hockey team, which has had a slew of financial struggles and blunders. As the Coyotes search for a site to build a new arena, they're currently playing home games at Mullett Arena, the new Arizona State University facility with a capacity of just 5,000 — well below the standard for NHL games.

The Gladwyne estate was first listed for sale in 2016 at a price of $28 million, drawing some interested buyers, but not at the price Barroway wanted, the Wall Street Journal reported. In 2019, Barroway tried to auction the property with a reserve price of $14.9 million, but again was unable to find a buyer.

Eventually, Barroway listed the property for rent at $40,000 a month and found a taker in Bartkowski, who appreciated the estate's privacy and the architecture. He ultimately chose to buy it.

Harry Cherry, a real estate agent with EXP Realty, who was not involved in the deal, told the WSJ that the greater Philadelphia market peaks at about $10 million. The luxury real estate market in much of the U.S. has been on a downslide for much of 2022 after the frenzy of buying and bidding wars during the previous two years of the pandemic.

In the three months ending on Aug. 31, Redfin reported that sales of luxury homes in the U.S. plummeted 28.1% year-over-year, the biggest decline since 2012. During the same stretch, sales of non-luxury homes decreased by 19.9% year-over-year. Much of the slowdown has been attributed to rising mortgage rates, inflation, a weak stock market and overall economic uncertainty.

“High-end-house hunters are getting sticker shock when they see the impact of rising mortgage rates on paper. For a luxury buyer, a higher interest rate can equate to a monthly housing bill that’s thousands of dollars more expensive,” Redfin Chief Economist Daryl Fairweather said last month. “Someone who was in the market for a $1.5 million home last year may now have a maximum budget of $800,000 thanks to higher mortgage rates. Luxury goods are often the first thing to get cut when uncertain times force people to reexamine their finances.”

As for Barroway, he bought a $7 million home on an eight-acre hillside property in Scottsdale in 2015, which he said drew him in with its breathtaking views.