Going to the dentist could soon mean no Novocain, no needle 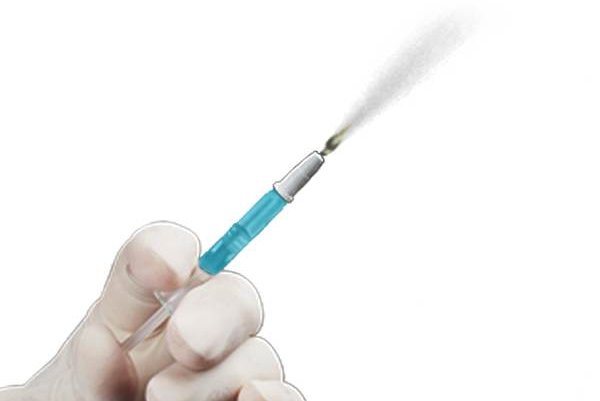 For those people who fear the dentist – and that painful shot of Novocain – help may be on the way.

A new FDA-approved anesthetic, Kovanaze, administered in a nasal spray, is safe and effective, according to researchers at Penn Dental Medicine in Philadelphia.

The drug could make the use of numbing agents delivered via needle unnecessary, but it is currently approved only for dental work on most top teeth.

"There is really nothing else like this," Dr. Elliot Hersh, the study's lead author and professor of pharmacology at Penn Dental Medicine, said in a statement. "This is obviously a great thing for needle-phobic individuals, and it can reduce inadvertent needle-stick injuries in the clinic as well."

Results of the phase three clinical trial were published in the Journal of the American Dental Association.

The drug, which combines the local anesthetic tetracaine and the nasal decongestant oxymetazoline, effectively prevented pain during a single restorative procedure in an upper bicuspid, canine or incisor in 88 percent of patients – a rate comparable to the success of common injectable numbing agents, the study found. A runny nose and nasal congestion were the most common side effects; no serious side effects were reported.

Kovanaze was developed by St. Renatus, a Fort Collins, Colorado, company named for the patron saint of anesthesia, and received FDA approval on June 29.

Hersh was asked by St. Renatus to lead the phase three trial because of his prior evaluations of a number of analgesic drugs, including an early study on Kovanaze. The research was supported by a grant from the drugmaker.

According to a statement from Penn Dental Medicine:

"The trial recruited 150 adults set to undergo a single dental filling in an upper bicuspid, canine, or incisor. One hundred patients were assigned Kovanaze and 50 were assigned a placebo spray.

St. Renatus will likely continue studies to assess the efficacy of Kovanaze for more invasive dental procedures, Hersh said. Further studies will evaluate its safety in use with children. Current FDA approval is for patients weighing at least 88 pounds.

The pharmaceutical firm began development of Kovanaze more than 10 years ago, according to its website.