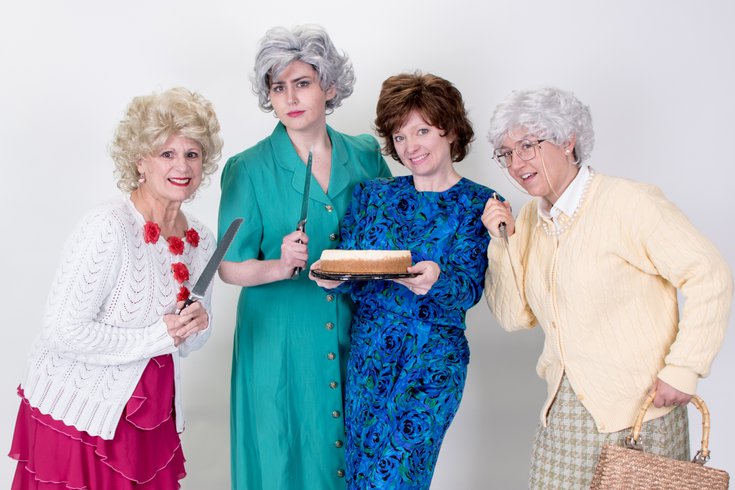 Without A Clue Productions is hosting its popular Golden Girls Murder Mystery show at Craft Hall on various dates throughout March. Tickets include a three-course meal and the show.

Though "The Golden Girls" aired its final episode in 1992, the popular sitcom about the antics of four older women residing in Miami continues to live on in perpetual syndication – as well as in the hearts and minds of fans of all ages.

Now, a local group of actors are putting on a murder mystery performance starring the well-known foursome at Craft Hall in Northern Liberties on various dates from March 6 through April 2.

The popular dinner-and-a-show began in Drexel Hill and Bensalem earlier this year, where it instantly became a hit event.

Tickets are on sale now for $64, and going fast. Audience members who correctly solve the murder mystery will win a prize from Without a Cue Productions, an entertainment agency who is putting on the show.

The Murder Mystery series is an immersive experience that present audiences with a "whodunnit" problem, starring the well-known Golden Girls characters.

Without a Cue hosts other themed murder mysteries, including ones based on "Sleepless in Seattle," and the "Titanic." The story starts with the characters attempting to a solve a murder mystery, but audiences soon discover that secrets are being hidden among the girls.

"Dorothy's sarcasm will have your sides splitting, Rose's naïveté will have you bent over in laughter, Blanche's sultry antics will have you laughing so hard tears will come out of your eyes, and Sophia will just kill," said Traci Connaughton, founder of Without A Cue Productions. "Listen closely, gather clues, and try to deduce who the killer is and win the prize."

A post shared by Without A Cue Productions (@withoutacue)

All of the performers live or work in the Philadelphia region, and photo opportunities will be available to audience members.

Each ticket includes the price of the menu items, which consists of a three-course meal and themed cocktails.

"The Curse of Jessica Fletcher" will run on select Fridays, Saturdays, and Sundays from 6 until 8 p.m., with additional performances at 9 until 11 p.m.

The second course, "A Taste of the South with Blanche," includes a cocktail with rum, Southern Comfort, pineapple juice, and a splash of lime. The meal includes a BBQ chicken salad with pepper jam, dill pickles, and bacon.

The third course, "Dessert with Rose," includes fresh lemonade spiked with raspberry vodka and raspberry liqueur. A Golden Girls favorite is for dessert — cheesecake cups with strawberries and a graham cracker crumble.

Both vegetarian and vegan food options will also be available. There will be alcohol-free cocktail options too.

As a tribute to Betty White, who passed away at 99 years old on Dec. 31, a portion of ticket sales will be donated to the Philadelphia Animal Welfare Society.

Masks are required to enter the building, but can be removed once seated.