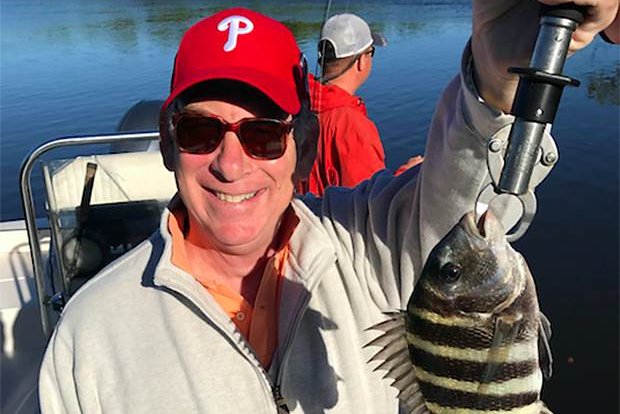 Sam Katz holds aloft a sheepshead he caught on a trip to Florida after his Oct. 20 arrest at Philadelphia International Airport. The incident reinforced for Katz "how much societal views have changed," he said. "The kinds of posts I saw on Facebook, people saying I have 'street cred' or I'm 'cool,' I never spent a day in my life being cool. But I was cool last Thursday."

It's been a week of soul searching for Sam Katz, who's out 25 bucks.

The filmmaker, business leader and three-time Republican mayoral candidate in Philadelphia was arrested at the airport a week ago Thursday for carrying a small amount of marijuana in his suitcase on the way to a weekend fishing trip in Florida. He was issued a citation.

"It's an amount that's one dollar less than the lowest parking fine you can get in Philadelphia," Katz told PhillyVoice from Detroit, where he's drumming up support for a film about the largest municipal bankruptcy in American urban history.

It's a strange circumstance for the 66-year-old father of four, an influential force in government finance and a figure whose electoral defeat in 2003 shined new light on Philadelphia's deep politics.

"Whenever you're dumb and you get caught being dumb, you get what you deserve," Katz said. "I was delusional about whether it would get out [to the public] for a couple hours, but then there's that moment you realize it's going to happen."

What on Earth was Katz thinking? It's tempting to say he "wasn't thinking" — a line all teens of denial have down — but Katz just had his mind on the tranquil waters of Florida's intercoastal bays, man, not the Transportation Security Administration.

"I've never done that before," said Katz, a fairly frequent flier in his days. "I didn't really think about it."

The Wednesday night prior to Katz's flight was a busy one. He did a screening at the Bryn Mawr Film Institute, jetted over to the 6ABC studio to watch the presidential debate and then spoke live on an "Inside Story" segment. It was past midnight by the time he got home.

Initial reports about the incident suggested that Katz's weed was discovered by TSA officials before he boarded his flight. Not so, Katz explained. He was removed from the plane by two Philadelphia police officers and did not once interact with TSA agents about what they found. Police asked Katz if he knew why he was being led away.

Katz was handcuffed according to police procedure and escorted to the terminal on a four-wheeler.

"Anyone who saw me who knew me, it couldn't have been lost on them," Katz said of his brush with law enforcement, a public figure's worst nightmare. Despite his assurances that he would not harm himself, police took Katz's shoelaces and belt from him.

"The police did their job and were genuinely respectful."

Sam Katz is not some sort of "pothead" or "stoner." Not that many people would care these days as attitudes about pot grow more temperate.

Born in 1949, Katz describes himself as a product of the Sixties, a time when the throes of the Vietnam War warped the fabric of American mores.

"I grew up in a culture where marijuana was illegal, it was countercultural and it was central to the social environment," Katz said. "It was generally acknowledged that most people smoked it, although that might not be true."

In the late '60s, Katz was recruited to play basketball at Johns Hopkins University in Baltimore.

"I was a straight-laced kid," Katz said, "but not after four years of college. I wasn't much of a drinker and fraternity life was transitioning from beer-oriented to dope-oriented."

"I discovered how inconsequential it was for most people," Katz said. "It reinforced for me how much societal views have changed.

It's not as if Katz's fast and loose college days prevented him from attaining great wealth or contributing significant value to society, as some would have you believe is the destiny of underachieving weed smokers. A lifelong Philadelphian and graduate of Central High School, Katz made a sizable fortune over nearly two decades with Public Finance Management, a local government advisory firm. Intermittently, he worked on several Democratic political campaigns until launching his first Republican mayoral bid in 1991.

No dice, but pragmatic dreamers don't let up. Katz ran for Pennsylvania governor as a Republican in 1994, losing the nomination to eventual winner Tom Ridge. Then came the bouts with John Street. He lost the closest mayoral election in Philadelphia's modern history in 1999 and four years later — after raising $12.5 million in 18 months — got trounced by double-digits amid the infamous FBI "bug" that pivotally altered the contest.

"I've had my share of public humiliation," Katz conceded, although it's never really stuck. After his final defeat, Tigre Hill's 2006 documentary "The Shame of a City" cast him more as a sympathetic casualty of Philly's "pay-to-play" culture of corruption than a serial loser. He since went on to establish History Making Productions, the studio behind "Philadelphia: The Great Experiment," a 14-part documentary series on the history of the nation's birthplace.

'I WAS COOL LAST THURSDAY'

All of a sudden last Thursday, Katz found himself thrust into the fierce debate about the status of marijuana in American society.

"I discovered how inconsequential it was for most people," Katz said. "It reinforced for me how much societal views have changed. The kinds of posts I saw on Facebook, people saying I have 'street cred' or I'm 'cool,' I never spent a day in my life being cool. But I was cool last Thursday."

And that's just millennials. At the Wyck House, a historic Quaker building in Germantown, Katz said a woman he knows walked up to him with pride for their generation. 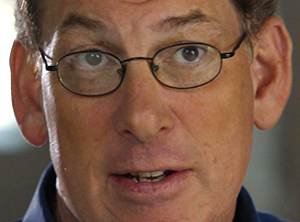 'There are already 25 states that have made marijuana available to the public in some form,' Katz says. 'I think recreational will be slower developing, but once it happens, it will be an avalanche.'

"We started that," she told him.

[Midway through our interview, Katz has to take an urgent phone call.]

"Sorry," he comes back, five minutes later. "I had to get an earful of s*** from my cousin. There've been a few of those, too."

Prior to last Thursday, Katz had no idea that former Philadelphia Mayor Michael Nutter had decriminalized the possession (and smoking) of small amounts of marijuana under 30 grams. Those caught holding pay a $25 fine, while those busted for smoking have to cough up $100.

Had Katz been detained in Florida, he'd be facing up to a year in prison and a $1,000 fine.

"I'm grateful for that," said Katz, who went to Florida anyway. After two days of rough fishing conditions and personal disorientation, Katz reeled in a sheepshead.

"It looks like it's wearing a prison suit," Katz joked. He threw it back.

The Florida trip's got Katz thinking.

"I've been following the whole medical marijuana story in Pennsylvania," Katz said. "The Republican-controlled house the bill passed through was conservative, and that's an understatement. When all things are considered, as a historian and observer, I found that to be eye-opening."

At this stage in his life, Katz is contemplating whether he might have a thing or two to say about the legalization of recreational marijuana.

"It was embarrassing but not earthshaking. I chose to accept it. You did this. This is on you. I'm not glad I had the experience, and I don't want to have it again, and I won't, but it is an experience. That's what life is. You let it go." – Sam Katz

As a fiscal conservative and social libertarian, Katz's interest in the issue is also a matter of encouraging good, sound governance.

"I don't know how many people are sitting in jail for possession, probably more for selling," Katz said. "And I think we're spending a s***load of money to incarcerate them in a system that isn't rehabilitative. We're hardening them for something that seems to me doesn't warrant that level of prosecution and public resources."

Meanwhile, from a revenue standpoint, Katz points to the value Pennsylvania already derives from so-called vice taxes on alcohol and cigarettes, not to mention the lottery.

(For context, Colorado raised $113 million retail marijuana taxes in 2015, more than twice the $42 million it collected from alcohol taxes in FY2014-15. Washington projects $136 million in revenue for FY2016 from its 37 percent excise tax alone, while medical marijuana generated $7 million in sales tax revenue in 2015, a number expected to decline).

"I'm not a tax enthusiast," Katz said, "but there's a revenue stream out there, and when it comes, it will be valuable to the state."

Not to get any of this twisted, the truth is Katz was pretty rattled by the episode. He wants to get back to making movies.

"It was embarrassing but not earthshaking," Katz said. "I chose to accept it. You did this. This is on you. I'm not glad I had the experience, and I don't want to have it again, and I won't, but it is an experience. That's what life is. You let it go."

In Philadelphia, Katz has some exciting projects up his sleeve. Before finishing up the final three parts of "The Great Experiment," Katz will focus on completing "The Daring Women of Philadelphia" and "Speed of Light," a film about the city's innovative contributions to the birth of the modern motion picture.

For an entire lifetime, Katz has seen Philadelphia as America's "research and development lab," a place where the power of ideas can flourish. He's likely done with local politics — he ruled out a 2015 run in a statement on his website— but thinks Mayor Jim Kenney is off to a good start.

That doesn't mean he's pleased with the city's history of alternating one-party domination, or the pension problem that has left so many governments, like Detroit, with "a foot on the fiscal banana peel."

He's got his own set of views these days.

"I would say that both parties have left me," Katz said. "I don't see either party moving toward centrist positions. They're both in disarray. The country is great, but policy can't get made on the fringe, and it won't. We'll just have a continuation of deadlock government."

What can you do? No, really. As he illuminates the extraordinary people and crucial events in our history, Sam Katz will always be thinking about building a better future.

For now, with a daughter soon to be wed, he considers himself a lucky man who's not too concerned about a hit to his public image.

"My batting average is high with the press," Katz said. "No pun intended."