Guy gets 'Chase 4 Ever' tattoo day after Utley traded

Phillies great is gone, but there are still ways to pay tribute to his time in red pinstripes 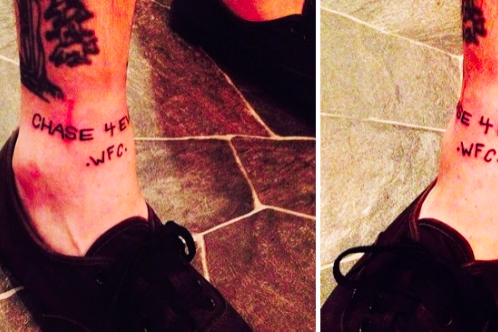 CrossingBroad reader Jeremy submitted a picture of his latest ink.

Chase Utley will be immortalized in Philadelphia, and deservingly so. Statistically, he ranks in the top 10 in multiple offensive categories for the Phillies and racked up enough web gems to earn his distinction as the franchise's all-time greatest second baseman.

As for his popularity among fans, he was so obviously beloved here that his quiet demeanor often kept him under the radar even during his most productive periods. For all that gets said about what it takes for Philly athletes to connect with a rabid fanbase, Chase Utley did so in a way that seemed to cross the barrier of analysis. When he declared the Phils "World F---ing Champs," it came out the way a fan would say it, and his intensity on the field always reflected his own admiration for the qualities fans appreciate the most.

He's a Dodger now, but he's pretty much a Phillie, like the MLB equivalent of former Flyers Jeff Carter and Mike Richards heading to the Kings. At least he has a friend there in J-Roll.

Seeing Utley go isn't easy, even with the steep decline in production. One fan decided to commit his love for number 26 to ink, getting himself a reasonably placed ankle tattoo, CrossingBroad reports.

That's probably not a move everyone would make, but cool. Nothing sums up Utley's reputation in Philly better than this t-shirt, which will always be perfect for those uneasy days you can't decide what shirt you want to wear: The Man. 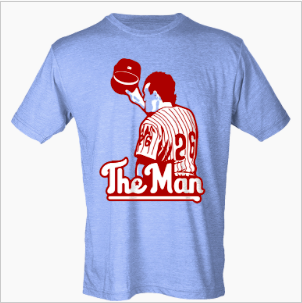