Allen Iverson offers Ben Simmons some advice on Sixers fans, the media and saying 'no' 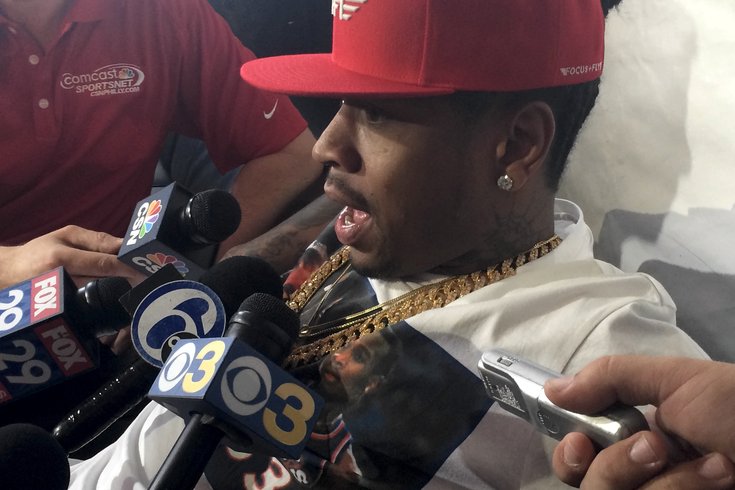 In 2016, Allen Iverson is a first-ballot Hall of Famer who will go down in history as one of the best to ever play the game in a city that is soaked in basketball tradition.

But back in 1996, Iverson was in the same position in which LSU forward Ben Simmons found himself on Thursday night -- being taken by the Philadelphia 76ers with the first overall pick in the NBA Draft.

Twenty years separate these two, but they have more in common than almost any other two players in franchise history. That's because they're two of just three players -- the other being Doug Collins (1973) -- in team history that will fully know the level of pressure that comes with being the No. 1 overall draft pick.

But it's more than that, according to the [/Matt Cord voice] "six-foot guard from Georgetown."

"I did an interview today, and I was just saying how it feels that, like, Wilt Chamberlain played here," Iverson said Thursday evening during the Sixers Draft Party out front of the Museum of Art. "Bobby Jones, Andrew Toney, Maurice Cheeks, Doc, Charles Barkley. All these great players. And then somebody else has to come in and try their best to fill those shoes, when they’re some big shoes to fill.

"And it’s not going to be anything different for Ben Simmons. You’ve got to come in here, and you’ve got some big shoes to fill, and we all want to cheer you on and hope and pray that you succeed and bring this city back to [basketball] prominence.”

In the years since Iverson last played a game in South Philly, however, the organization has fallen mightily. The kind of winning done on Iverson's watch -- like their 10-game winning streak to start the 2001-02 season -- has been replaced by a kind of losing that can become infectious if not remedied -- 10 wins for the entire 2015-16 season.

Thursday night's draft is just one part of a long transition from rebuilding to contending, but it's an important one.

“It’s really exciting, because we deserve it," Iverson said. "As Sixer fans, we deserve excitement, and I think whatever direction they go [in the Draft], that’s what it’s going to bring. These fans here, they deserve it.”

Going 47-199 over the last three seasons will do that to a fan base. You can go ahead and add that to the list of outside forces putting pressure on Simmons before he's even been introduced by the team.

“Listen, you want that type of pressure," Iverson said. "To know that these fans are so passionate — you want passionate fans. You want somebody to come and root for you and wish the best for you. All you’ve got to do is play every game like it’s your last. That’s all you can do is give effort. Shots aren’t going to go in every night. Some nights you might get in foul trouble. Those things are going to happen.

"But Philly fans don’t give a damn about that. They just want to see maximum effort. And I’m pretty sure that’s what [Simmons] is going to come with. He’s been fighting all his life to get to this point; you thing he’s going to slow down now? No way.”

RELATED: Iverson: Every Sixers fan should be in HOF with me

As it seems with all of the most beloved athletes in this city's history, the key to winning over the fans is simple.

“In Philadelphia? You better give it everything you’ve got," Iverson said when asked what advice he's give Simmons. "Play every game like it’s your last, and they will love you. They will love you to death. That’s all they want. These are the greatest fans ever. And they just want you to give maximum effort, that’s it.”

Unfortunately, it's not quite that simple. They also want to win.

The problem becomes when they get neither.

Only one of those two, however, is entirely in a player's hands. And it's that -- playing with maximum effort -- and not the wins and losses on which a young player like Simmons should focus. Often times, especially in the case of Iverson, the effort and winning go hand-in-hand.

And with the current core, The Answer doesn't think that winning is too far off.

“Our nucleus is, on a scale of one to ten, a ten," he said. "Like, we have the young talent that we need. Sprinkle some older guys in there, guys like myself, and we’ll be alright.”

Don't get too excited. He's not coming out of retirement.

But I think the future for us is so promising with Noel, Okafor, Embiid, and then these draft picks on top of the talent they already have — man, the future is bright for the Sixers.

“No. No. No. I’m done," he said when jokingly asked if he was hinting at a comeback. "I’m done. I’m done. [Laugh] But, just some older guys. Not super old, like me, but older guys. And hopefully, some free agents that have been there. And I’m not saying like the Finals or anything, but guys that have been around a while to show these young guys how to do it.

"You need an Eric Snow, an Aaron McKie, a [George] Lynch, a [Dikembe] Mutombo, a [Theo] Ratliff. You need those older guys, those OGs to show you the way. The young guys, the talent, they can play basketball. But it’s preparation, it’s a whole bunch of things that come into being focused to try to win the ultimate prize, and that’s a championship.”

As currently constructed, the core consists most of big guys. And in a league that has been trending towards more of a focus on the perimeter game and less emphasis on post play, some see that as a problem for the Sixers.

But not Iverson. He understands the role the big man plays, even in today's game. And while the dimensions of frontcourt players may be evolving, their role, and to a larger extent their impact on the team, is going anywhere.

“I think the big man role is so important," Iverson said. "The big man is the guy who will do all the dirty work. Obviously, the stars are the guards; they get all the shine. But you can’t win no basketball games without the big men. Can’t do it. Now, will there ever be another Shaquille O’Neal or anything like that? I truly doubt it.

And just like Iverson was a part of the last Golden Era of Sixers basketball, the now-Hall of Famer hopes he can help usher in the next one.

Congratulations @BenSimmons25. I know you'll make all of us Philly fans proud!!

'The media, they're not your friends'

Iverson had other advice for Simmons as well. For example, he gave this great answer on what he would tell the 19-year-old about dealing with us, the media:

“You’ve got to understand that the media, they’re not your friends. I love Phil Jasner. But some days, I couldn’t stand him. But you’ve got to understand that the person is doing their job. It’s not malicious towards you, it’s reporting. It’s doing their job. Just like we play basketball, this is what you guys [the media] do. Sometimes it is, but most times it’s not personal. You’re just reporting.

"You’ve got to understand not to get too friendly, to think somebody’s your friend, and then them disappoint you one day with one article or something they report. I think if you approach it like that, you won’t get your feelings hurt. I got my feelings hurt a lot of times, but I had to realize that these are not your friends. These are not the people you hang with. They’re doing their job. And I had to get older before I could understand that that’s the way it is. So now, I don’t have no feelings toward’s ya’ll doing your jobs.”

Simmons wasn't even born when Iverson was drafted back in 1996. But not all that much has changed when it comes to the pitfalls surrounding professional athletes. And if you've ever see Billy Corben's 30 for 30, "Broke," you'll know that it's those that you're closest to that often hurt the most, specifically because it's so hard to tell them no.

Here's what Iverson had to say about how important it is for Simmons to learn that two-letter word:

“He better learn it. It took me a long time, but you have to because you cripple people. You don’t let people develop into being their own person when they always know they can make a 9-1-1 call to Allen Iverson and he’s going to take care of them. So you never get up off your ass to get on your feet.

“And it took me a while to learn it. But you definitely get the picture after those $20 million checks aren’t coming anymore. You’ll find out real fast.”