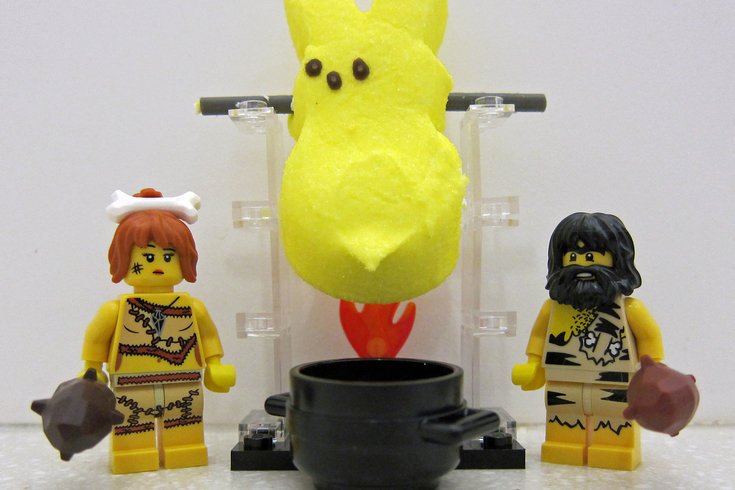 The situation is rapidly deteriorating inside the Peeps factory.

Nearly 400 workers walk off the job at Just Born, the Bethlehem-based company that makes Peeps and Mike & Ikes.

Now all those newborn candies are in there raising themselves. And it sounds cute and all, but the peep mortality rate is skyrocketing and experts predict a complete colony collapse by 2018.

Striking Just Born workers chant "No pension, no Peeps!" and "No money, no Mikes!" on the picket line.

And that’s why Ike started hanging out with the bad candies, like Good, and Plenty, and the Snickers with the razor blade.

Philly is ranked 188 out of 200 on Allstate's annual America's Best Drivers Report.

Enjoy loping around on your high horses, all you stop-sign fundamentalists.

State Sen. Tom Killion, a Republican from Delaware County, introduces a bill that would allow beer distributors to sell wine.

For reasons nobody can quite explain, this leads to the end of the world.

A tractor trailer on its way to the U.S. Mint in Philly overturns, spilling thousands of pennies onto I-95 in Delaware.

And dramatically increasing property values in the area.

A federal appeals court rules that some people convicted of minor state crimes should get a chance to legally own guns.

“Hell, let’s give them each a couple bottles of merlot, too,” says State Sen. Tom Killion.

An audit claims that the Pennsylvania Turnpike is on "potentially unstable financial ground" that could lead to "transportation disaster."

But the report does conclude that “a couple strategically placed penny truck accidents” would “do the trick.”

Five Philly pizzerias make The Daily Meal’s list of the 101 best in the country.

Even though the list is nonsense, and the people who crapped it out neither knew what they were talking about nor wanted to make the list in the first place, it’s sort of nice to see Philadelphia so well-regarded on such a highly visible work of specious clickbait.

A partnership between a city animal control group and a South Jersey dog rescue group dissolves in the wake of a controversy around a blurry photo purporting to show euthanized dogs.

“We both agree dogs need to be killed — in large numbers and on a regular basis. But for the love of Christ, learn to a compose a photo, people.”

An email from a UPenn fraternity encouraging freshman to “wear something tight” and not be a “tease” draws outrage on campus.

Hey, everybody. Just got back from the future. Just a head’s up: Nobody in the frat learned anything from the incident and they all became really rich and powerful. The world sucks. Gonna go try to get eaten by a T-Rex now. Laterz.