Drink kombucha on the regular for these 6 health benefits

This fermented beverage transcends a trend 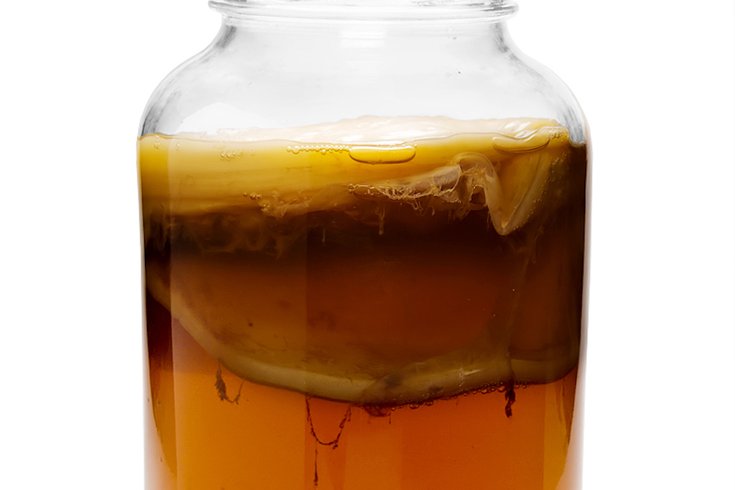 Gut health has graced the list of many “wellness trends” lists in the past few years, and this is likely due in part to kombucha, which has introduced the world to a healthy (and somehow delicious) beverage. But is this drink actually healthy or just a fading trend?

Well, you can answer that question for yourself after reading this lowdown on the health benefits of kombucha.

According to Forbes, kombucha originated in Northeast China around 220 B.C. and was initially prized for its healing properties, not unlike today. The drink eventually made its way to the mainstream in the United States in the mid-1990s, but was generally regarded as some sort of “hippie drink.”

Kombucha is made through a fermentation process detailed by Forbes:

The process of preparing kombucha can vary but generally involves a double fermentation process wherein a SCOBY (a pancake-shaped symbiotic culture of bacteria and yeast) is placed in a sweetened tea mixture and left to ferment at room temperature for 1-3 weeks, and then bottled for 1-2 weeks to contain released CO2 and encourage carbonation. From there, bottled kombucha is placed in a refrigerated environment to slow down the carbonation and fermentation processes. Lack of awareness around this second fermentation cycle led to misregulation of alcohol content in recent years.

IT'S A GREAT SOURCE OF PROBIOTICS

Probiotics found in kombucha, are one of the main reasons the carbonated drink has become so famous in the world of gut health. But what do probiotics do exactly?

Well, your stomach is literally filled with bacteria and to put it simply, probiotics are a friendly form of bacteria that ensure overall health in your gut’s microbiome, or environment. Probiotics are able to “colonize your gut with health-boosting microorganisms,” according to Healthline.

Most of this bacteria is naturally occurring, however the quality of bacteria is often dependent on a person’s diet. The gut flora, which are crucial to many functions surrounding overall health, are highly sensitive to your diet, and studies show that an unbalanced gut flora is linked to numerous diseases — including type 2 diabetes, metabolic syndrome, heart disease, colorectal cancer, Alzheimer's and depression. Probiotics come in and balance things in the gut out, resulting in improved digestive health — which is directly linked to overall health, Healthline explained.

Your body already has its own way of detoxifying itself — that’s pretty much the job of the liver. But, according to Men’s Health, kombucha, may offer a slight health boost through its concentration of polyphenols, a type of antioxidant that fights inflammation. These antioxidants are also able to reduce your exposure to oxidation, “a chemical process that damages your cells, which can eventually lead to things like heart disease, stroke, or even cancer,” Dr. Will Bulsiewicz, a South Carolina gastroenterologist, told Men’s Health.

Kombucha is loaded with B vitamins, and particularly vitamin B12, is known to increase energy levels and contribute to overall mental well-being, reports Dr. Josh Axe, a clinical nutrition and chiropractor. And its gut-repairing abilities play a big role in mental health — depression may be a major symptom of leaky gut, specifically due to the way that bad gut permeability contributes to inflammation.

In fact, studies show that kombucha’s ability to regulate the “communication of the gut-brain axis” suggested it would be useful in preventing or minimizing the effects of anxiety and depression. It is hypothesized that it would be particularly useful for astronauts and other groups who are under extreme work conditions (like miners), according to Axe.

IT CAN REDUCE THE RISK OF DISEASE

Kombucha is said to lower a person’s risk of developing heart disease and cancer, and is helpful in the management of type 2 diabetes.

How? Well, rat studies show that kombucha can greatly improve two markers of heart disease, “bad” LDL and “good” HDL cholesterol, in as few as 30 days. In fact, green tea — which kombucha is often made from — drinkers have up to a 31 percent lower risk of developing heart disease, a benefit that may also apply to kombucha, according to Healthline.

Research suggests that the antioxidants in kombucha may help reduce the impact of oxidative stress – and complications such as retinopathy, nephropathy, and cardiomyopathy – caused by diabetes, especially for liver and kidney function, which are weaker in diabetics, according to genomind.com.

According to Delish, kombucha is rich in vitamin C, one of the most important tools to protect yourself from inflammatory diseases (like the cold that has been floating around your office).

IT CAN HELP KICK THE SODA HABIT

It’s a no-brainer that kombucha is a MUCH healthier carbonated alternative to soda, which according to recent reports, is one of the worst things you can drink. And paired with these health benefits and the delicious flavors kombucha comes in, there’s no need for soda, really!

Score some local kombucha at Philly's own fermentary in Old City, Inspired Brews.