Event at the Art Museum will help novices learn the craft 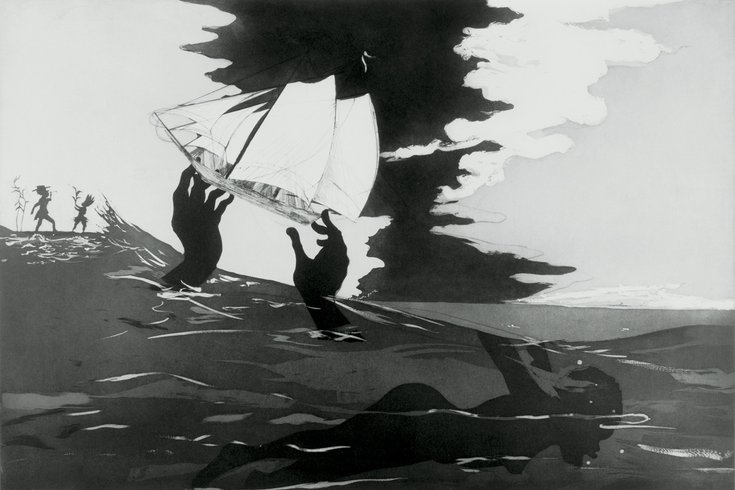             "no world" by Kara Walker. The painting is one of the images featured in the Philadelphia Museum of Art's "Represent: 200 Years of African American Art" exhibit.

Have you ever wondered who writes the endless entries on Wikipedia? Well, you do. Or at least you can.

The Philadelphia Art Museum will host an edit-a-thon as a part of their exhibit "Represent: 200 years of African American Art." The goal: get information about African-American artists featured in the exhibit entered into Wikipedia.

As organizing curator John Vick explains, the lack of minority artists featured on the online encyclopedia is common.

"The assumption is that artists who are in a minority in some way, whether that be the color of their skin, gender, or where they are in the world, are often underrepresented."

In an admittedly casual research approach, Vick simply entered the names of the artists featured in the exhibit into the Wikipedia search engine. Around 28 artists had no entry whatsoever, while around 15 had incomplete entries.

"For some, there wasn't even an image of their work," Vick said.

The idea stemmed from Charlotte Lowrey, a project assistant for the Department of Contemporary Art at the museum. After Vick gave a presentation to the staff on the exhibit, she chimed in.

Outside of work, Lowrey has been participating in the Art Plus Feminism Wikipedia initiative, a group that attempts to address the same lack of representation for female artists.

"Less than 10 percent of the editors (on Wikipedia) are women," Lowrey said, "People tend to edit pages that they know about, and the majority of people editing are men."

Lowrey has participated in edit-a-thons for Art Plus Feminism. A lightbulb went off for her after Vick's presentation. She decided to bring the idea to Vick for the current exhibit. Vick obliged.

The event is intentionally being held on Wednesdays as a part of the museum's pay-as-you-wish promotion for hump day, staying open till 9 p.m for those who work from 9 to 5.

"It's experimental, but it's for the greater good," Vick said, "Maybe if this works out, we'll have more edit-a-thons in the future."

In order to help those new to Wikipedia editing, the group has brought in Mary Mark Ockerbloom for the event, who works with the Chemical Heritage Foundation as "Wikipedian in Residence."

Lowrey admits she's aware of how people get their information, and giving these artists an online presence helps boost their profile for those who visit the exhibit.

"It's the world's largest source of free knowledge," Lowrey said, "We do put info on our own website, but Wikipedia is great and its free."