But you have to know where to find them in the vast forest. 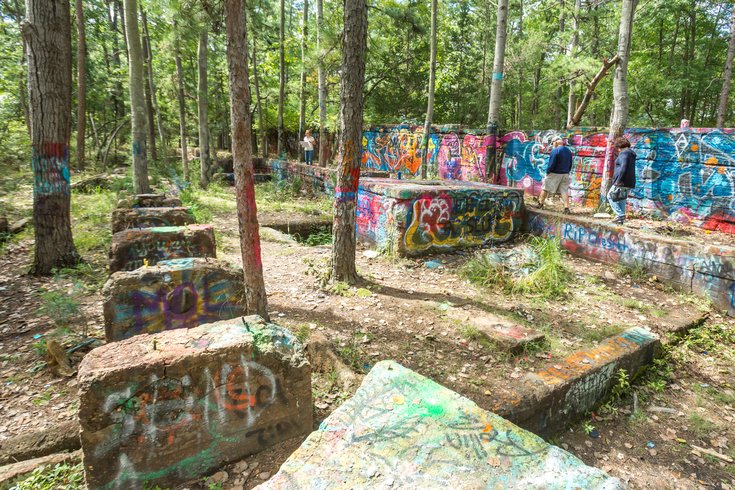 The remains of the Brooksbrae Terracotta Brick Factory in Manchester Township, Ocean County, lures in graffiti artists with its unexpected weirdness.

A bit remote, vast, largely empty – save for trees, sand and waterways – the Pine Barrens of today hides its history.

Difficult to envision now, but from the 1750s to the early 1900s, the Pinelands bustled with small industries and factories, making glass, bricks, charcoal, paper and iron. The coastal plain even hosted America’s first reservation for displaced Native Americans, the Lenni Lenape branch of the Delaware nation at Brotherton.

Ghost towns – as well as reminders of a few ghosts, including at least one notorious highwayman and the famous apparition dubbed the Jersey Devil – are everywhere.

But only if you know where to look among the Pinelands' more than 1 million acres. 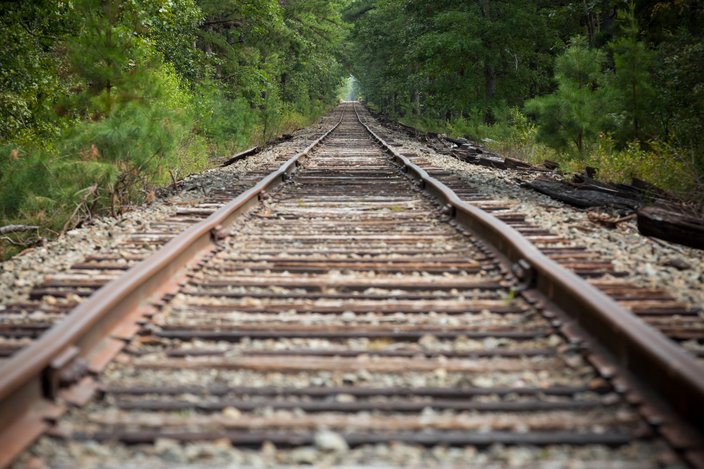 “The Blue Comet,” a luxury train that brought passengers from New York to Atlantic City via the Pinelands, derailed near this location on Aug. 19, 1939.

Historian and tour guide Barbara Solem has quite literally written the book: “Ghost Towns and Other Quirky Places in the New Jersey Pine Barrens.”

On Oct. 28 – just before Halloween – Solem will lead a small bus adventure through an 88-mile circuit through South Jersey for Pinelands Adventures, the outing wing of the conservation group Pinelands Preservation Alliance. The trip is sold-out but you can check for cancellations here and look for future dates, beginning with a Nov. 12 event.

On her September tour, Solem began with a visit to perhaps the most visible remnant of a ghost town, the Samuel Richards mansion in Atsion.

Richards was a prominent ironmaster from Philadelphia. His former iron town once employed 100 at the furnace and had another 700 living in the hamlet, as well as a company store and outbuildings. 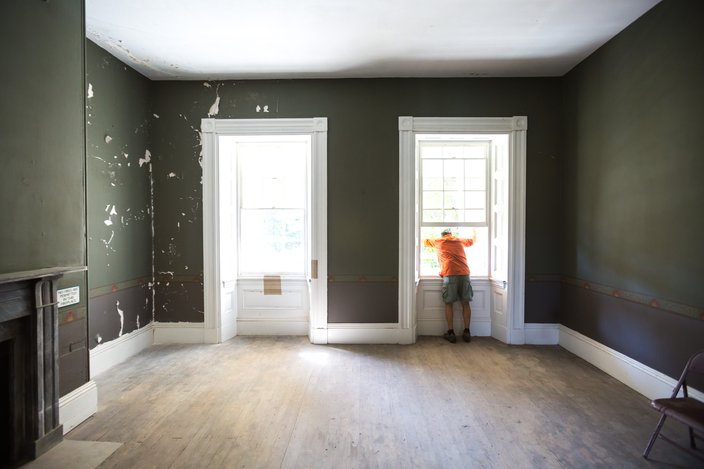 John Volpe, education director of Pinelands Adventures, closes shutters on the historic Atsion Mansion in Shamong, Burlington County. Atsion was owned at one time by A.J. Rider, “The Cranberry King,” whose name is on a college near Trenton.

Look closely at the mansion’s porch: the columns on the stately Greek Revival summer home of the Richards family are made from painted cast iron pipes

For the most part, industry and land speculation in the Pinelands, no matter the time period, was fueled by investment from affluent Philadelphians – think Joseph Wharton of business school fame.

They were intent on tapping South Jersey’s natural resources, such as naturally occurring pig iron, sand for glass, wood products and more via stage roads and later railroads. 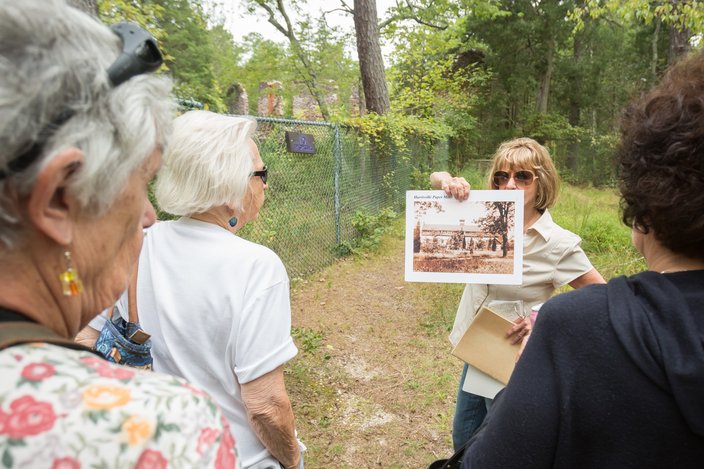 Barbara Solem, author of “The Ghost Towns of the Pinelands,” explains the history of the Harrisville town and paper mill during a September tour. Remains of the building can be seen at top left.

But also, Trenton money: A.J. Rider, “The Cranberry King,” whose name is on a college near Trenton, was among the later owners of Atsion.

Rider’s money attracted a deadly band of highwaymen who in 1916 shot Rider twice, killed his brother and wounded his daughter – who sped away with her dead uncle and wounded father in the car – during a hold-up attempt on a $4,000 payroll, the equivalent of nearly $90,000 today.

The Atsion property went through boom and bust, new owners and reincarnations – paper mill, cotton factory, cranberry packing – before it was abandoned.

That’s a cycle repeated at other ghost towns and historic sites in the Pines. New Jersey eventually inherited many of the deserted properties when it bought the 100,000-acre Wharton Tract in the 1950s for $3 million (nearly $28 million today). Today, that's the core of the preserved Pines. 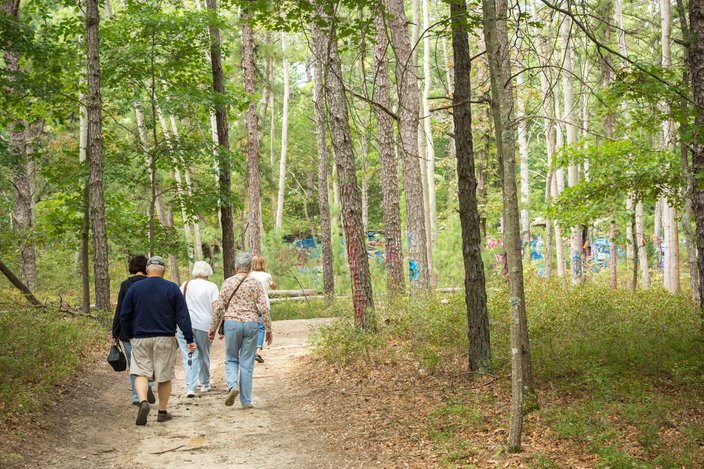 The tour group approaches the ruins of the Brooksbrae Terracotta Brick Factory in Manchester, Ocean County.

“I’ve been driving through for years,” said Noreen Tkacz of Ventnor, who was along on the September tour. “But who knew it was here?”

"There was industry, and now it is a great wilderness. It's fascinating that it could change that completely," said Solem, who lives in the Pines.

She thinks myth-making is just part of the region.

"Locals, when there is a mystery in the Pines, a legend is born," she said.

There is lots of fodder. 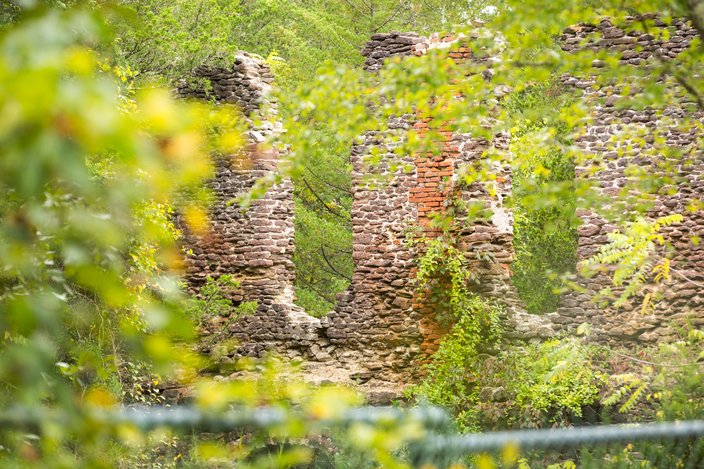 The remains of the Harrisville paper mill in the New Jersey Pinelands National Reserve.

There are the ghost towns of Harrisville, Martha, Paisley. Several clay manufacturers, such as the Brooksbrae Brick Company, home of the Pine Witch and Pine Wizard, and a major gathering spot for graffiti artists.

Also, the tony and exclusive Chatsworth Club, which exists only in memory, where J.P. Morgan and other financiers were members. 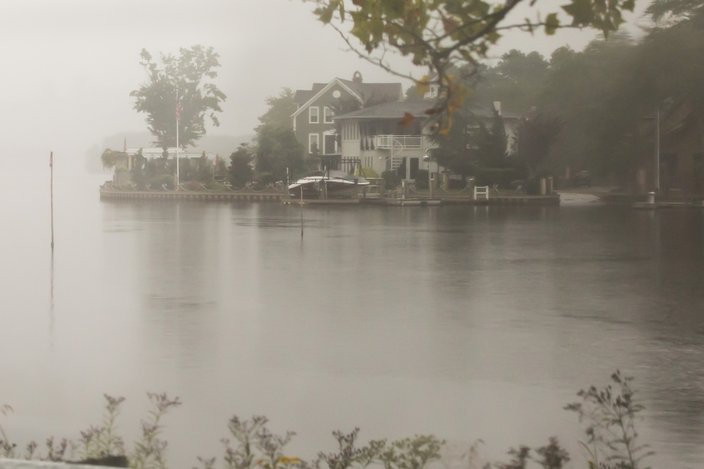 The Mullica River and Forks area once gave government-sanctioned pirates from Philadelphia, New Jersey and Delaware Bay region access to intercept dozens of British merchants traveling upriver from the Atlantic.

Then there were the boat builders, pirates and glassmakers at The Forks of the Mullica River, also the site where Navy hero Stephen Decatur supposedly fired a Jersey-made cannon ball through the wing of the Jersey Devil.

And finally, there are many a roadhouse, such as the Indian Cabin Mill Inn, where the infamous highwayman and ladies’ man Joe Mulliner was captured, eventually tried and hung, before returning to the woodlands as a ghost.

He’s supposedly searching for his headless body and the gold he buried amid those ghost towns in the Pine Barrens.