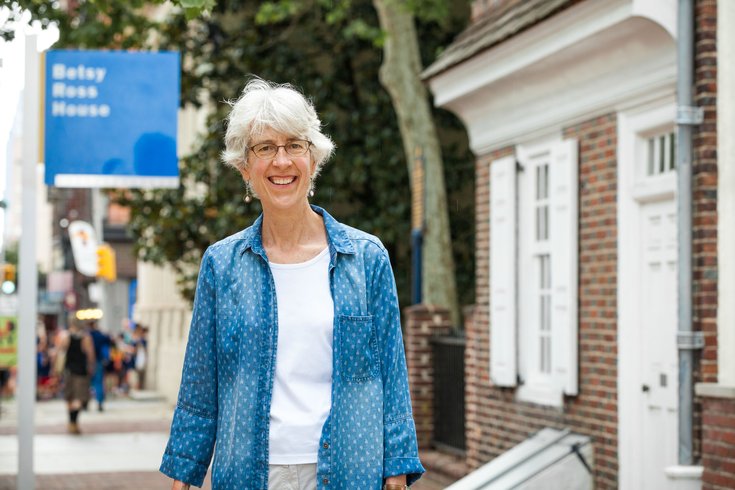 Sandra Mackenzie Lloyd stands in front of the Betsy Ross house. Lloyd writes most of the scripts that are performed at the historic district’s storytelling benches.

Sandra Mackenzie Lloyd’s version of Philadelphia’s history made its way to more than 100,000 visitors last year.

Tourists likely don’t see her or know her name but if she is successful, they’ll go home and remember the interesting, mostly unknown tales she has culled from the city's past.

Lloyd is the historian for Historic Philadelphia, an organization dedicated to showcasing the area's history. She writes the scripts for the city’s 10 storytelling benches located around the historic district, where staff perform free, roughly five-minute-long narratives about a piece of Philadelphia’s past that were in all likelihood found and brought to life by Lloyd. The benches were launched in 2005.

“If you can tell a story that is rich and complete and completely engages kids, Adults are going to get pulled in it too, because human beings are wired to want to tell and hear stories.” – Sandra Mackenzie Lloyd, historian

“The idea is to make history personal and accessible,” Lloyd said. “To let people know that folks just like us did things that were important and had an impact on their world.”

Lloyd’s job is to make the tales simultaneously educational and compelling enough to attract tourists – and their dollars – to the city.

Lloyd, 62, has a slight build and angular features which come alive when she hits on a critical point. Like an actor, she occasionally breaks into accents when she talks or quotes others.

She's been interested in American history since she was in kindergarten when she wrote, starred in and directed a play about Betsy Ross, the woman widely credited with creating the first American flag in Philadelphia in 1976.

“It lasted through my whole kindergarten year and we had numerous performances, it was actually pretty embarrassing,” she said. “History was always my thing from the time I was a tiny person.”

Growing up, she collected and sold antiques with her mother before attending Smith College as an American Studies major. In graduate school, she learned about museum curation and received a master’s degree. While curation allowed her to focus on history, she said her real passion was storytelling.

She writes in her home office, working surrounded on three sides by books that aid her hunt for stories and are packed with post-it notes to highlight her research. Her aim is to find moments or details that aren’t necessarily well known.

For example, she remembers reading Walter Isaacson’s biography of Ben Franklin and learning about a time in 1776 when Franklin stayed in a tavern with future president John Adams during a trip to New York. She turned that encounter into a script which began: “Those Founding Fathers, they really liked each other, right? Always got along, right? Never argued, right? WRONG!”

The story goes on to explain how Franklin wanted the tavern window open to let the air circulate while Adams, who has an enduring reputation for crankiness, did not like fresh air and wanted to keep it closed.

“It is this moment where you get these two Founding Fathers in their nightclothes fighting about the window,” she said of what attracted her to this tidbit of American history. “It says a lot about their personalities.” 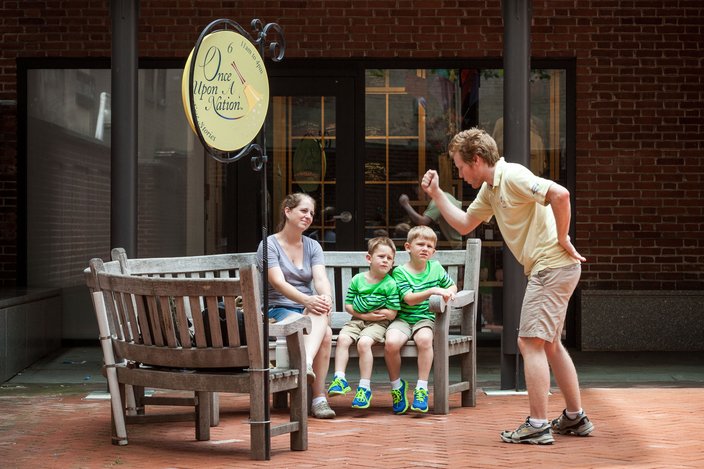 Her scripts touch on some tougher topics as well, such as slavery. About half her story scripts, Lloyd said, contain some degree of her own views on history.

As a recent example, Lloyd said she grew frustrated with people who refused to vaccinate their children. In response, she wrote about George Washington’s decision to inoculate his army against smallpox – a decision that was central to his victory.

“That was personally one of the more satisfying new stories,” she said.

Writing a new story often takes a week but when an idea strikes it can be drafted as quickly as the same day. On the long end, a topic can ferment and take several years before it becomes a final product, Lloyd said.

Lloyd is not the only person to have a hand in how the stories are presented.

The pieces are run by other historians to make sure they are accurate. Coxey Toogood, a historian at Independence National Historical Park, is a frequent consultant.

Toogood said that while she has made a few corrections or suggested a slight change of meaning in the past, “of late, I have not had much to say because she does such a good job.”

“If I do find something, she is incredibly gracious about it.”

Her colleagues also play a key role in finalizing the script and helping with the rehearsals that bring the written words to life through the storytellers.

Lloyd, however, does not perform. When asked if she does any of the actual storytelling, her response was “Lord, no!”

But performers like Courtney Mitchell bring Lloyd's take on Philly history to life.

On a recent Friday at a storytelling bench, Mitchell was sharing the story of Sarah Josepha Hale, who helped push for the modern recognition of Thanksgiving. Constantly in motion, she used a voice loud enough for the stage, gesturing when describing a letter and punctuating the words she was saying with her body.

“If you can tell a story that is rich and complete and completely engages kids,” Lloyd said. “Adults are going to get pulled in it too, because human beings are wired to want to tell and hear stories.”