George Alvarado, who has stage 4 throat cancer, wanted to give his son positive memories, but got the opposite 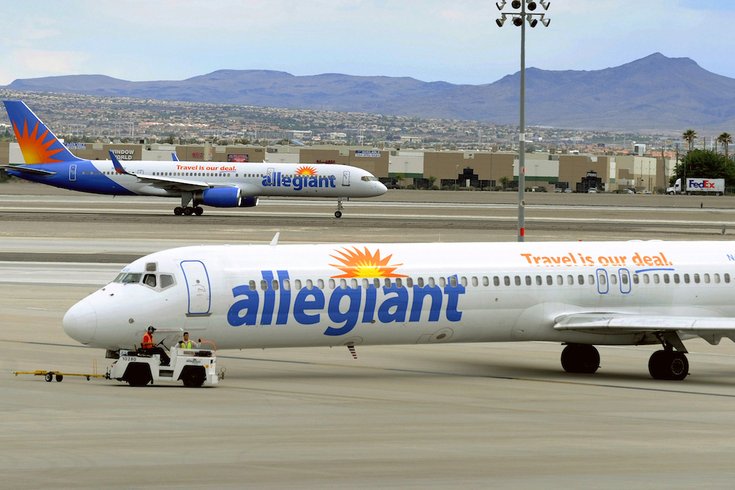 In this Thursday, May 9, 2013, file photo, two Allegiant Air jets taxi at McCarran International Airport in Las Vegas. A flight from Bellingham, Wash. to Phoenix, Ariz. this week drew headlines for the behavior of passengers onboard.

Meet Christina Fabian, George Alvarado and their 7-year-old son, Giovanni. The family was traveling home from Washington state to Phoenix, Arizona when the youth – saddled with the knowledge that his dad’s battle with stage 4 throat cancer will likely soon end – had an allergic reaction.

Before Allegiant Flight 171 took off from the airport in Bellingham, Giovanni “began to get very itchy and he was scratching all over. He started to get hives, so we informed the flight attendant who informed us that there's dogs on every flight and just smirked, which minimized his experience for me," Fabian said.

What happened next solidifies this story as the one that exposed human beings as being downright horrible.

An account from KCEN-TV – which I saw via Jalopnik – maintained that, as the trio gathered their items to deboard the plane, fellow passengers started clapping.

I want to repeat that: Because their takeoff was delayed BECAUSE A 7-YEAR OLD CHILD HAD AN ALLERGY ATTACK BROUGHT ABOUT BY DOGS BEING ON THE PLANE, these cretins decided to applaud.

Granted, they couldn’t have known the horrors that befell the family to the point of taking a trip so a kid would have a good memory of his soon-to-die father.

Still, if you’re going to clap at a kid’s discomfort, or don't object to people doing so, you are a heinous human being.

Already staring death in the face, Alvarado offered KCEN-TV a much more measured take on the situation, though.

"As a dad, I was just hopeless right there. I just looked at the people clapping. I was just shaking my head, I was like, ‘Man lets get out of here,’" said Alvarado, who had to wait for the next dog-free flight. "You don't know how much time people have or why they are hurting. Just be nice. Be kind.”

Heed his words, folks. Heed his words. And, hey, Christina, George and Giovanni: I apologize on behalf of humanity. We're supposed to be better than this.