Horrible reactions to the horrors in Paris

It was a weird thing to say to people you’ve encountered for the first time in your life, but the guy sitting next to us at the Trocadero on Friday night said it anyway.

“I think he hates me,” the concertgoer said to my wife, in which the “he” meant me. It was a rush to judgment, an assessment made without any factual basis.

In a world where first impressions often instantly create final stances, he took my laughing near silence when asked whether I went to the Carly Rae Jepsen show out of spousal obligation as a symbol hatred when – in fact – I just didn’t want to publicly admit that the opposite was true.

The body count isn’t the end game: The body count fomenting a fear that creates dissention, overreaction and – ideally, to their warped minds – internal self-destruction is.

Selfish? That’s up for everyone else to decide, I guess.

Having already gotten word that a Twitter friend who was at a soccer match that nearly became a massacre was safe, dinner blended into a pop show about which one thing struck me.

Side note: If you want to know what it was like to be there, his feed is a must-read.

Did not expect to have terrorists attempt to murder me on this trip.

“Look around,” I said, safely ensconced in a sing-along bubble world of catchy hooks. “There is nothing but happiness in this room. Everybody, everybody, is smiling.”

Of course, nothing gold can stay.

After the concert let out, the best Uber driver in the city transported us back to the real world where happiness was replaced by carnage, anger, hate and rushes to judgment that can’t easily be laughed off.

The depth of the tragedy became clear after watching television reports from the city we adore and last visited five years ago. It’s an understatement to say "describing the methodical bloodbath as chilling is an understatement."

It is a breeding ground for sickeningly ignorant ideas like “let’s close down all the mosques.” So, I shouldn’t be surprised at all that it didn’t take long to get called out on social media for ostensibly not rearranging my entire life to properly kneel at the grief altar for an overseas tragedy that was still unfolding.

How dare I find it odd that foreign leaders hashtag words like sympathy and solidarity instead of just expressing them sans Twitter SEO-friendliness. You went on living – Tweeting videos and pictures from a place that wasn’t under attack – so shut up and sit down, Brian.

Getting over that slight was as easy as unfollowing and muting, but it brought into focus the realization that our reactions to terrorism often represent the killers’ mission in the first place.

Put another way, the body count isn’t the end game: The body count fomenting a fear that creates dissension, overreaction and – ideally, to their warped minds – internal self-destruction is.

Put even another way, as the New York Times’ Paul Krugman did today, “The point is not to minimize the horror. It is, instead, to emphasize that the biggest danger terrorism poses to our society comes not from the direct harm inflicted, but from the wrong-headed responses it can inspire.”

Krugman was talking macro-level. I maintain that premise filters down to a micro-level to that point that it inspired me to post, “Still trying to figure out the best way to use [this] tragedy as a means to foist my tangentially-related political beliefs upon Facebook users. Stay tuned.”

This was not merely snark. It was inspired by head-shaking revulsion brought about by seeing people racing to use the still-warm bodies in Paris as a mechanism to advocate for their personal causes in several contexts.

The “What About Us?” contingent

University Of Missouri Distances Itself From Tweets Complaining About Paris Coverage https://t.co/sGpNbR3uEj pic.twitter.com/YXoUTP5AMg

My latest. Conservatives sink to new lows in using Paris attacks to belittle students @ the University of Missouri https://t.co/rVkhWUcYNU

I stand with #Paris. And #Kenya. And #Beirut And #Mizzou And #Sandra And #Tamir And the list goes on. Hate must be fought worldwide.

The “This Wouldn’t Happen If Everyone Was Armed” yahoos

The answer is "no." pic.twitter.com/UVYPQtlRGl

Dear #Paris...don't y'all wish one of y'all had been armed when those jihadis stormed in and started acting like good Muslims? #2A 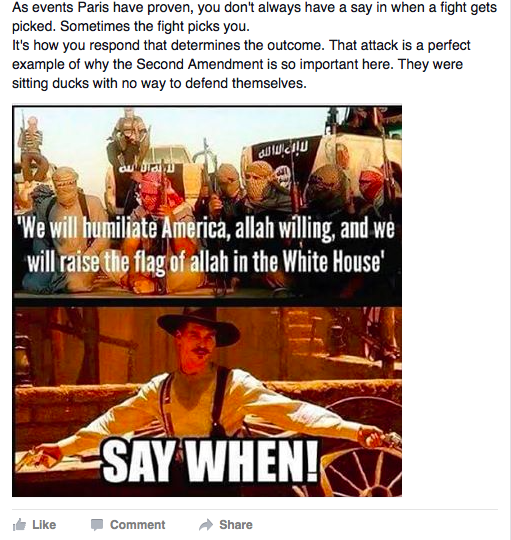 The "People Who See Everything About Themselves" Crew

S/O to Bono for making six coordinated terrorist attacks in Paris about himself.

Time for a President who will act to protect Americans, not just talk & protect the image of Islam. I call for the following... #DemDebate

On "Morning Joe," Donald Trump says the United States needs to "watch and study the mosques." He would consider shutting some down.

If we don't go and bomb ISIS, Obama needs to be removed from office. We are no longer the world's super power and will never have peace.

Retaliation is the worst response possible. It does to show you're no better than a terrorist outfit like ISIS. Thumbs down, France.

How're you gunna teach you're children that two wrongs don't make a right when you bomb someone for bombing you...

The France bombings were planned just so they could find an excuse to bomb Syria. Whoever doesn't see that ur blind, ignorant and dumb.

Obama says he needs more time...to plan the next false flag attack as pretext for regime change in Syria

Some of those sects have vaild points to make.

Yes, all tragedies should be mourned.

Yes, if there were 1,000 people in the Bataclan with guns, the attackers probably would have killed fewer people and died quicker themselves.

Yes, I suppose a concert hall being targeted means music fans were specifically in the crosshairs, guy from U2.

And yes, war is both sometimes necessary and horrible.

But how dare anyone try to put tragedies on a sliding scale that left some folks saying, paraphrased, Yeah, it's bad, but it's not 9/11 bad. It sure as hell is for anybody affected by Friday night's assault on humanity, and those that will likely follow in its wake.

The terrorists actually do win when we start infighting in ways that expose our vast differences instead of highlight the unity that often brings us together, a dynamic that’s been gradually giving way to embedded rage in America during recent years.

Instead of conversations, we have screaming matches and – like I just did – latch onto the statements of a few to paint the minds of many with a broad brush.

There are no easy answers for living in this world where people hate what America represents while Americans drift further and further apart for reasons they seemingly don’t even understand.

Hard reality: it's tough to see what military action Obama can take in Iraq/Syria that will truly prevent a repeat of Paris.

If a fighter gets distracted in the ring, there’s a good chance he – or she – will get knocked the hell out.

Well, infighting is a distraction and all the Facebook French-flag profile picture changes and judgmental Tweets in the world won’t fix that. 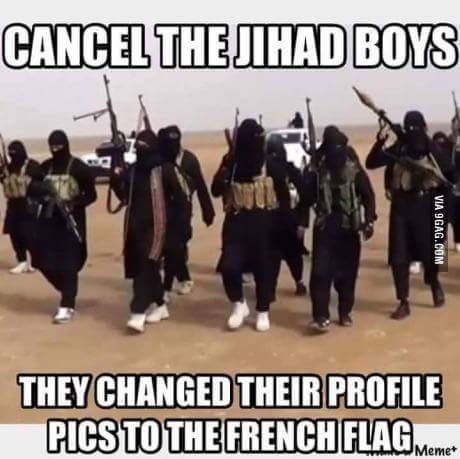 How can we understand an enemy from afar if we think the guy sitting next to us at a Carly Rae Jepsen show hates us instantaneously?

Hell if I know. But Joann Sfar, a cartoonist for Charlie Hebdo, sure seems to. 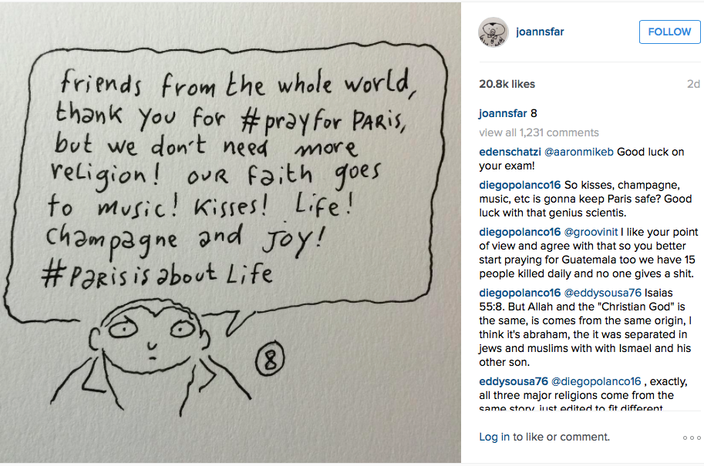 I suggest we heed this advice because as the late Marvin Gaye pointed out decades upon decades ago, only love can conquer hate.