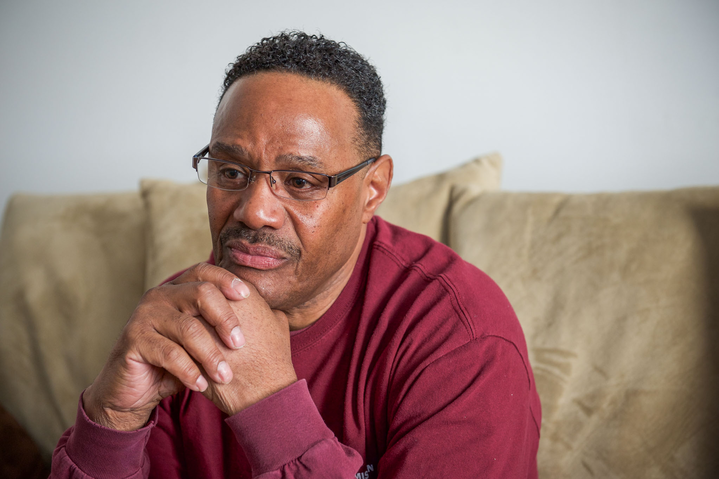 Vernon Jeter, 59, in his apartment in Trenton. 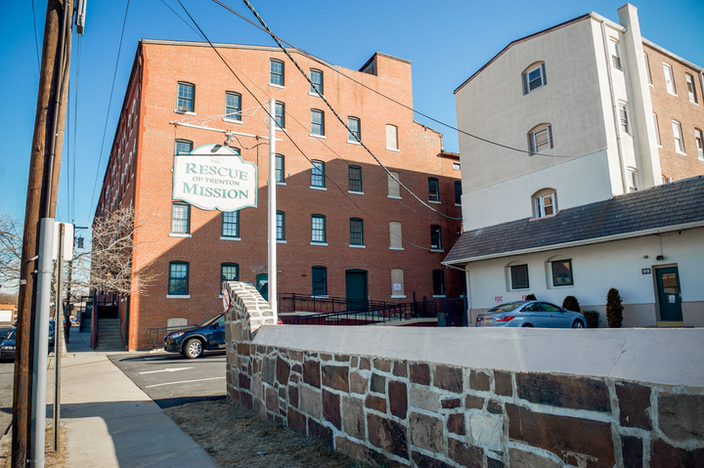 The Rescue Mission of Trenton, which Vernon Jeter credits with helping him recover.
(Michael Phillis/PhillyVoice)
General assistance also helps subsidize recovery programs and homeless shelters, which receive some money if they take in an individual who receives those benefits. But there are people like Vernon Jeter, who do not get that financial assistance from the state, according to Mary Gay Abbott-Young, the chief executive officer of the Rescue Mission of Trenton, which runs a homeless shelter that took Jeter in.
Last year, about 15 percent of Rescue Mission clients were eligible for general assistance, which provides her shelter about $25 a day per client, said Abbott-Young. That financial reality is a budget strain, she said.
Vernon Jeter, who now rents an apartment near the shelter, spent his teenage years in Long Branch, New Jersey, getting into trouble. Today, on Facebook he has reconnected with some of the people from those years.
“It’s a group of us but there are so many of us who aren’t around anymore,” Jeter said, adding that many died from causes as varied as cancer to drug use. “I was heading more in that direction more fast and more harder than any of them.”
Yet, somehow, his many years in and out of New Jersey and Florida prisons, and his abuse of alcohol and drugs, didn’t kill him.
In December 2009, he walked out of prison in New Jersey and went out to drink again. With his Lake Street friends in Asbury Park, he said he entered a liquor store and grabbed an E & J Brandy, or as he calls it “Easy Jesus.” (The online slang site, Urban Dictionary, defines the beverage as the “drink of homeless drunks.”)
And that’s what Jeter was ... again. He found employment for a while moving furniture, he said, but his skin broke out in eczema so bad it started bleeding on the job. He lost work, lived temporarily in a shelter and bounced around the apartments of friends.
During this time Jeter started looking for financial assistance to help find a place to live. He said the response made him feel more helpless and encouraged more bad decisions.
“I went to apply for help,” he said. “I was homeless; I didn’t have food; I didn’t have anything. I wanted a place to say.”
He could get food stamps but as Jeter says, “where was I going to put the food?” When he went to social services he was told his eligibility for emergency housing assistance and general assistance was lost because of the drug dealing charge.
“It’s like pushing me right off.” 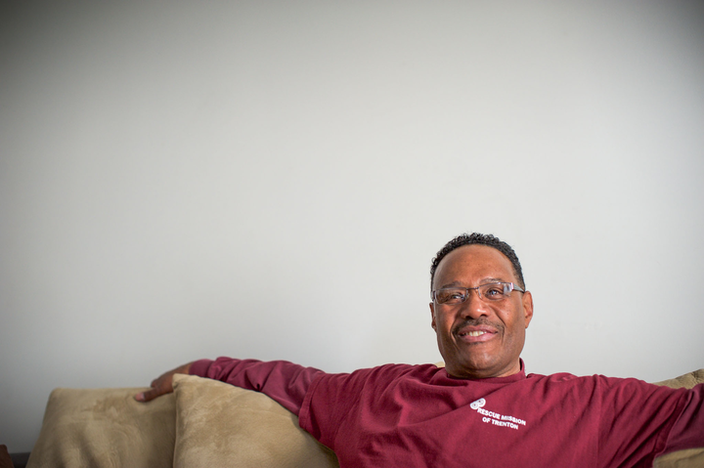 Vernon Jeter talking about his life after getting sober in an apartment he rents in Trenton, N.J. (Michael Phillis/PhillyVoice)
Jeter remembers the conversation that got him to finally move toward recovery. It was the summer of 2013 and he was sitting on a bench, drinking, in Asbury Park. A man, who Jeter said probably recognized him somehow, encouraged him to go to the Rescue Mission of Trenton and get some help.
The next day or so, with only a few dollars in his pocket, he bought a train ticket instead of a bottle, according to Jeter. “I don’t know what made me do that,” he remembers, laughing.
He checked into the homeless shelter, went through the recovery program and got sober. He said it was still frustrating to not have access to general assistance benefits as he was looking for housing and had to rely on the good faith of the mission to extend his stay. Now, he is delivering furniture for the mission and living down the block from where he first checked into the homeless shelter. He freely acknowledges his mistakes and said he is happy with his progress. He has two roommates and a view of the federal courthouse from his front window – he said the building serves a reminder of the government’s power should he mess up.
•  •  •
Cunningham, the state senator, said it is more likely that convicts will commit more crimes without job and financial assistance when they leave prison.
“What are they going to do? They are either going to hit us over the head, literally, because they have to eat, sleep, breath, and we also want to encourage people,” she said. "Everybody makes mistakes in life. Everybody, we all do.”
Gov. Chris Christie's office didn’t directly address questions about the exclusion of benefits.
“The governor has been extremely vocal about a change in approach in prioritizing drug treatment over incarceration, especially for nonviolent offenders, and has led on many initiatives to make second chances a reality,” said Kevin Roberts, his spokesman.
Along with Cunningham’s legislation there is a set of proposed laws aimed at stopping the state’s drug abuse problem through rehabilitation. Christie has championed that issue and called the War on Drugs a failure.
For her part, Vandervalk said the general attitude around drugs had changed and that the law she helped pass as assemblywoman in 1997 should be revisited. At the time, Vandervalk said, she believed its penalties were too harsh, but that a less punitive bill could not get passed.
“As time goes on, there has been a recognition that you are not good, you are not bad, there are many things in – there is a gray area,” she said. "You can’t be withholding everything or that person will never get their act back together. Not only are you affecting that individual but you are affecting their families.”