How social media is saving lives of shelter kittens 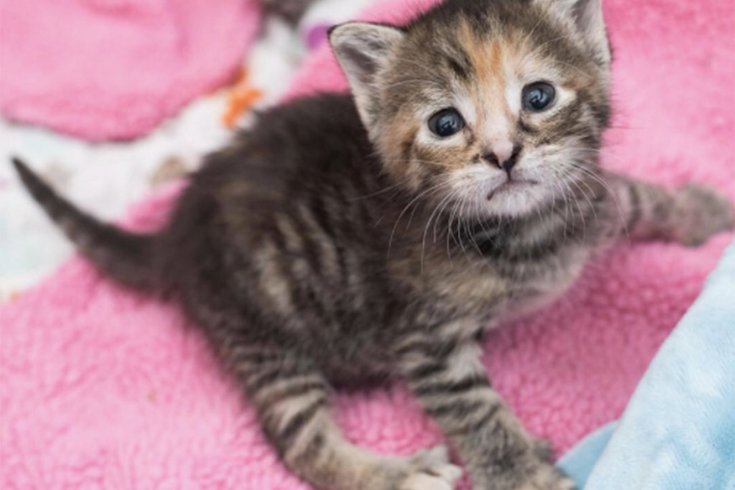 Udon, above, and Phoebe, the author's cats, have 10,200 followers on Instagram.

If you’ve never adopted a cat, you might assume kittens are hardest to come by, because they’re cute and tiny and everyone wants one. Many well-intentioned animal lovers think it’s more generous and loving to rescue an adult cat instead of a kitten, because they believe adult cats have the most difficult time getting out of shelters alive.

But this simply isn’t true.

“Kitten season,” which begins in early spring, peaks in summer, and dwindles into fall, sounds like a first-come, first-serve flash sale of highly coveted, healthy litters. But the truth is local animal shelters are overwhelmed with hundreds of helpless, often critically sick and injured orphaned kittens every month. Most of these facilities simply don’t have the staff or resources to care for newborn kittens, who must be bottle-fed every few hours and manually stimulated to go to the bathroom.

As a result, the overwhelming majority of kittens under 8 weeks old who are brought into shelters are euthanized.

Now the power of social media is being harnessed to save kittens in peril. 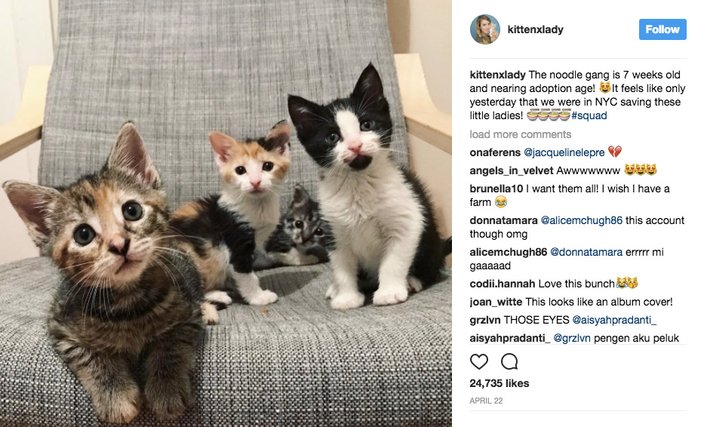 Udon and her littermates – the “noodle kittens” – faced incredible odds. Hundreds of thousands of Hannah Shaw’s fans throughout the world rooted for them, cheering through all of their ups and downs.

Kitten Lady is a Washington, D.C.-based kitten rescue and foster advocacy project begun by Hannah Shaw, who’s gained 428,000 Instagram followers and an equally devoted YouTube audience by rescuing kittens from New York, to Philadelphia, all the way to Peru. Shaw uses her social media presence to educate people about how they, too, can save kittens’ lives by fostering litters through their local animal shelters.

Shaw’s created a powerful movement that’s generating a ripple effect; each kitten she rescues, raises, and eventually adopts out becomes a beloved social media celebrity, an ambassador for the cause of saving even more kittens’ lives, while reminding people to spay and neuter their cats to control the population, and fortifying the #adoptdontshop movement, which encourages would-be pet owners to choose rescue organizations over breeders. 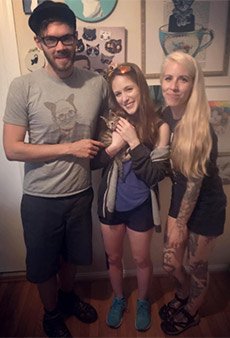 The author, center, holds Udon, a tortoise-shell/tabby blend, who she rescued with the help of Hannah Shaw, right, AKA The Kitten Lady. At left is Shaw's boyfriend, Andrew Marttila, a professional pet photographer.

I recently joined Kitten Lady’s mission when I adopted little Udon, a beautiful torbie (tortoise-shell/tabby blend), who was rescued by Shaw from a New Jersey shelter with a high kitten euthanasia rate last March, during a speaking engagement in New York City. Udon and her littermates (all named after Japanese noodles, inspired by Shaw’s recent trip to Japan) faced incredible odds. A little over a week old and just beginning to open their eyes, one kitten was dying from a gaping wound and needed to be euthanized. Another, Soba, had an anatomical abnormality and required stomach surgery, and another, Shirataki, passed away from an extremely rare complication during routine sterilization.

Hundreds of thousands of Shaw’s fans throughout the world rooted for the “noodle kittens” as they lovingly came to be known, cheering through all of their adorable, euphoric ups and grieving through their devastating downs.

The moment I scooped Udon up in my arms, she gave me a giant kiss, which she continues to do each morning. She and my other cat, Phoebe (who I adopted out of foster care through the Camden County Animal Shelter), are examples of the exceptionally loving cats that great foster homes produce. Foster care not only makes it possible for kittens to survive and thrive outside of shelters until they’re big enough to be weaned, sterilized, and adopted (about 2 pounds and 2-3 months old); it also gives them a chance to become the kind of well-socialized animals who relish human affection.

Jen Kostesich, a 34-year-old health policy specialist, began fostering kittens with her husband back in 2012, when the couple lived in Philadelphia. A former board member of the Philadelphia Animal Welfare Society (PAWS), Kostesich has since become an expert kitten foster volunteer, saving each year between 20 and 30 kittens (many with special health concerns like eye and upper respiratory infections). She and other dedicated foster families are making huge strides toward turning Philadelphia into a no-kill city.

Increased foster participation along with trap and release animal sterilization programs have dramatically improved the survival rate of Philadelphia’s shelter animals. Ten years ago, only 11 percent of animals were able to be saved and adopted; in 2016, 80 percent of animals admitted to shelters found loving forever homes .

Kostesich, who now lives in Baltimore, where she continues to foster through the Maryland SPCA, says “anyone with a bathroom” can foster kittens, because they take up such little space.

“We started fostering when my husband and I lived in a 600-square-foot one bedroom, one bathroom apartment and we already had one cat and two medium sized dogs, so, if we could do it, anyone can,” she said.

“Sharing our foster kittens on social media, especially on my Instagram, helped so much more than we could have imagined in finding forever homes." – Jen Kostesich

In her experience, shelters pay for all necessary medical care and medications, which means fostering is also an extremely affordable experience. Some shelters even provide food, litter, toys, and other neonatal kitten essentials, such as humidifiers and heat rocks.

“Sharing our foster kittens on social media, especially on my Instagram, helped so much more than we could have imagined in finding forever homes. I can't tell you how many people found me on Instagram and sent me a message about wanting to adopt a kitten!”

No one’s social network is too small to help an animal find a home. Kostesich says more than half of her foster kittens’ adopters have been personal friends.

“I definitely recommend regularly sharing the kooky antics of your kittens on Facebook, Twitter and Instagram; people love following along with a kitten's particular story,” she said.

It’s true. Every day I receive messages from at least a dozen of my cats’ 10,200 Instagram followers. People tell me how much they love Phoebe and Udon, whose sweet, silly, sisterly love can brighten anyone’s bad day. People share pictures of their cats, living and deceased, with me and confess how much their animal companions changed their lives. That a tiny kitten who nearly died in an overcrowded New Jersey animal shelter could bring hope and joy to thousands of people around the world is a testament to the true value of social media.

One of Kitten Lady’s slogans, that kittens are “tiny but mighty,” couldn’t be more true. For creatures who make such fragile, precarious entries into the world, their impact on humans can be earth-shatteringly profound.

My cats make me laugh when I think laughing is impossible. They impart lightness on the darkest days. Their purrs offer a healing frequency. I am eternally grateful they were given a chance at life by loving fosters like Hannah Shaw and Jen Kostesich. My hope is to pay it forward, by fostering kittens myself and encouraging others to do the same, so cities like Philadelphia can finally save every last animal that comes through their shelter doors.