There also will be live music and games. The celebration takes place Sunflower Philly on Saturday, Sept. 17 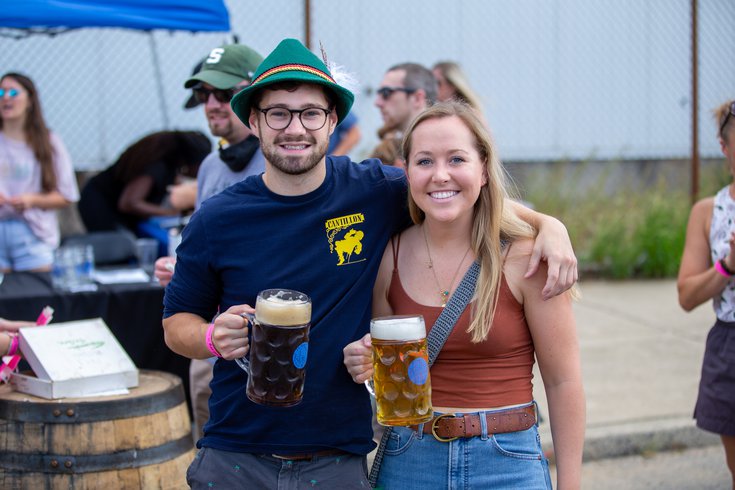 Human Robot in Kensington hosts 'USA vs. The World: An Oktoberfest Celebration' from 12 to 5 p.m. on Saturday, Sept. 17 at Sunflower Philly. Sample among 26 beers from Europe and the U.S. – including several Philly-area breweries.

Fall is almost here, and with its arrival comes popular seasonal festivals, limited edition food and drink releases, and plenty of Oktoberfest celebrations in Philadelphia and the region.

One of those parties takes place this weekend when Human Robot hosts USA vs. The World: An Oktoberfest Celebration at Sunflower Philly, at 1725 N. Fifth St in Olde Kensington.

The festival features a variety of American beers and breweries –including several from this region – and pits them against German counterparts, in a nod to the Octoberfest celebration that takes place in Munich each year. Each beer was hand-picked by organizers at Human Robot.

While entry to USA vs. The World is free for people 21 and older, there are a variety drink token packages and souvenir mugs available for purchase in advance, beginning at $25. Or you can pay as you go, grab beer tokens at the festival for $8 a piece – there will be plenty of plastic cups to go around.

This local take on Octoberfest is a celebration of "all things lager," with live music and entertainment provided by West Philadelphia Orchestra, a local metal band, and a DJ set to close out the evening.

Among the attractions and games will be the second edition of Human Robot's Milk Tube Race, in which participants will chug from narrow cylindrical glasses filled with beer with foam. It foam is actually a style of pour using a specialized beer tap, a practice that originated in the Czech Republic which Human Robot has adopted as an option for beer drinkers at their taproom.

Food trucks will line a portion of Germantown Avenue and Fifth Street. Among them will be favorites like South Philly Polish restaurant Mom Mom's Kitchen and Fitler Square-based Rowhome Coffee. Each food vendor will serve up Oktoberfest classics in addition to some of their own menu items.

At least 13 breweries from the United States and Germany whose beer will be featured during the Oktoberfest celebration.

There are a handful from Philadelphia including Human Robot, Crime and Punishment, and Second District. Other Pennsylvania-based breweries include Bethlehem's Bonn Place, Ambler's Forest and Main, and Warwick Farms in Bucks County, along with Pennsylvania itinerant brewery Trauger.

From New Jersey, there will beer from The Seed: A Living Beer Project, which is based in Atlantic City and Tonewood Brewing in Oaklyn, Camden County. Two New York-based breweries, Hudson Valley's Industrial Arts and Brooklyn's Threes Brewing will also be at the event, along with Vermont's Von Trapp Brewery and New Hampshire-based Schilling Beer Co.

The World participants include recognizable names to imported beer aficionados, like Aecht Schlenkerla, Ayinger, Bitburger, Mythos, Plank, Reissdorf, Rothaus, Schwatz and Uerige. A complete list of the breweries participating in Oktoberfest can be found on the USA vs. The World Eventbrite page.

Human Robot recently announced the release of its own Oktoberfest Marzen-style Lager. Known as a "March beer," the seasonal product with a sweet toasted bread aroma and faint hints of spice, according to the brewery's social media announcement. There are four-packs available for $15.

USA vs. The World: An Oktoberfest Celebration