Hundreds of students walk out of Cherry Hill East in protest 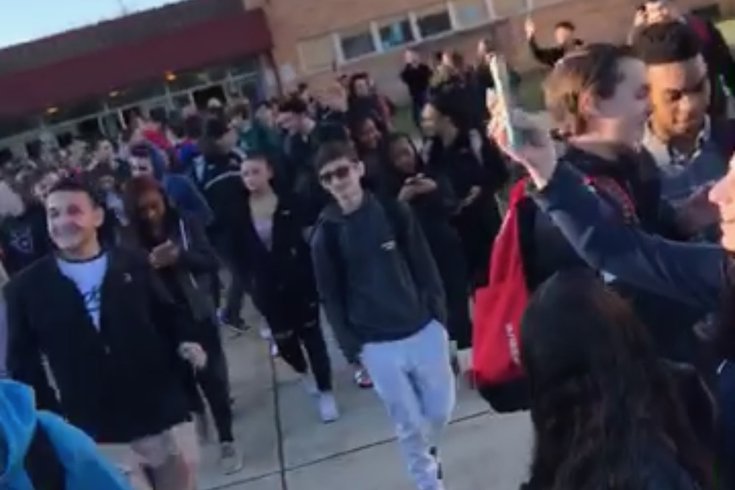 For a second day, students at Cherry Hill High School East held demonstrations at the school to show support for a suspended teacher and perceived lapses in security at the campus' buildings. On Tuesday, high school students walked out of class at 8 a.m. They marched in front of the school, as seen above, before heading behind the school to the athletic fields, where students gathered on the track. There they walked 17 laps on the track, one for each student killed in the shooting at Marjory Stoneman Douglas High School in Parkland, Florida.

In the second day of protests at Cherry Hill High School East, hundreds of students walked out of the building Tuesday to call for the reinstatement of a beloved teacher and tighter security at the school.

Students left the school en masse around 8 a.m. and gathered on the track located behind the school located at 1750 Kresson Road. According to someone at the school, the students did 17 laps around the track, an apparent homage to the 17 victims in the deadly Parkland school shooting.

Today, our school came together to protest an injustice done to a beloved history teacher, Timothy Locke. He’s subject to an unpaid leave for speaking out on the lack of school safety at Cherry Hill East in light of the Parkland Shooting. Our principal still refuses to comment. pic.twitter.com/3prm2jv1us

i have never been so proud to be a part of Cherry Hill East #FreeLocke pic.twitter.com/iHVRFuDWKj

WATCH LIVE: Students from Cherry Hill East are staging a walkout in support of history teacher Timothy Locke who was suspended after talking about security concerns in the wake of the massacre in Florida. https://t.co/wvMl4F209m pic.twitter.com/k8H23CvYUV

The students did so despite another verbal warning from East Principal Dennis Perry, who advised students participating wasn't a safe option. For the second day in a row, Perry offered to listen to students' concerns in the auditorium.

There were no threats of suspension Tuesday, unlike Monday when Perry promised exactly that for students who took part in a sit-in demonstration. Students participating in the sit-in mostly ignored Perry's warnings, as they did Tuesday.

Students are angry over the suspension of history teacher Timothy Locke, who was disciplined after comments he made about the Parkland shooting. Locke told students he was concerned something similar could happen at Cherry Hill East and suggested there should be better security at the school.

According to 6ABC, Locke, a 59-year-old Iraq war veteran, has told parents his bag had been searched for weapons and he had to undergo a psychiatric evaluation.

An online petition asking to bring Locke back had nearly 800 signatures as of Tuesday morning. Perry's office, contacted Monday afternoon, has not returned a PhillyVoice request for comment on the ongoing controversy.