Inis Nua Theatre not 'dumbing down' its productions 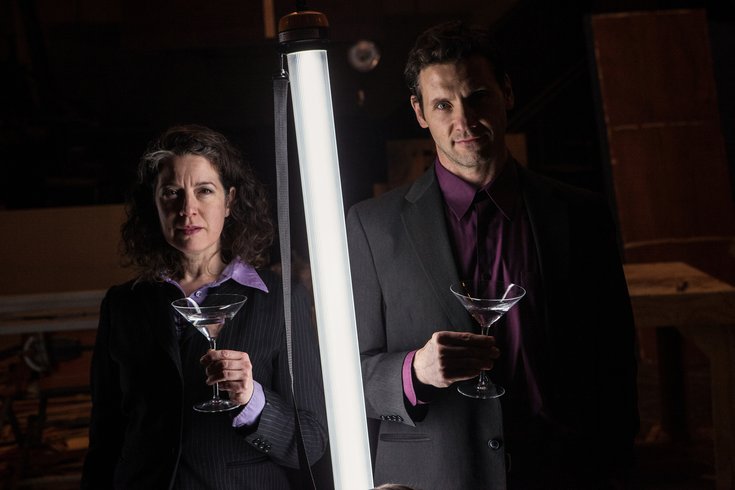 Corinna Burns and Tim Dugan as art forgers Liz and Jim in the Inis Nua production of 'Long Live the Little Knife,' by David Leddy.

Five Barrymore awards and 11 seasons later, the not-for-profit Inis Nua Theatre Company appears to have found its footing -- not just in Philly, but internationally.

"We do a lot of American premieres, and we deal with [international] literary agents who are like, 'We're waiting for a New York production,' and then it doesn't happen, or it happens in a flea-ridden Lower East Side theatre," Inis Nua artistic director and founder Tom Reing told PhillyVoice.com. "But slowly, literary agents are starting to see us as a destination point."

Thankfully, the company's latest production, "Long Live the Little Knife," didn't land in one of those "flea-ridden" New York theaters. It will instead have its American premiere in February at First Baptist Church at 1636 Sansom St., thanks to -- if you can believe it -- a simple, honest-to-goodness upstanding reputation on the international scene, one that comes from the good faith that the company won't butcher or thin out a foreign playwrights' work.

"[Tom] had seen my own production of ['Knife'] in the Edinburgh Fringe Festival in 2013 and asked if he could create his own new version for Philadelphia. That’s an unusual thing for me," David Leddy, Scottish playwright and writer of "Knife," told PhillyVoice.com. "My company, Fire Exit, exists to present my work, and I don’t usually let other people create productions of my playtexts. But I spoke to my friend Daniel Jackson, who wrote [Inis Nua's past production] 'My Romantic History,' and he said he had a lovely time with Tom and Inis Nua and recommended that I say 'Yes.' So, I did. And it’s certainly been a great experience so far."

Part of what's made bringing his play to Philly a "great experience" -- and what's caught the attention of about seven other international playwrights who've all made journeys to Philadelphia since working with Inis Nua --  is that, he said, Philadelphians will be able to enjoy his characters in all their "authentic craziness." The play, about a husband-and-wife duo of art forgers who carry the narrative through unconventional twists and turns that "Fun with Dick and Jane" wouldn't bother with, will not have any of its dialogue tailored for American taste. Scottish jokes and cockney dialect are, in fact, intact. That purist approach is something Reing said he's not just mindful of but insistent upon when pitching playwrights to allow him to bring their shows to Philadelphia and Inis Nua -- which, it should be clarified, only runs productions from Ireland, Scotland, Wales and England, or pieces that touch on the immigrant-American experience.

"They're plays that don't go to the stereotype of what's Irish or Scottish culture -- we don't do shows in cottages and all that stuff," Reing said. "We'll do plays about art forgers and kung fu films, and that's what I like about it. They're dealing with the same issues America's dealing with -- they're seeing it through a cultural filter, but you can relate to it. ... We're not dumbing it down for American audiences."

Looking ahead, he's hoping to get the OK to take this same approach to Tim Price's "The Radicalisation of Bradley Manning" for a run next year -- a Welsh take on one of the most controversial figures in recent American history. In the meantime, Leddy's "Long Live the Little Knife" will have its American premiere Friday, Feb. 6; it will preview the show to a limited audience on Feb. 4, which will also be attended by Leddy. (His first time coming to Philadelphia.)

"I'm excited to arrive and see how the whole thing looks," Leddy said. "It's like someone's rebuilt your house, and you don't look at it until the day you move in. It's like an avant-garde, theatrical version of Extreme Makeover or something."