Wawa previews its biggest store ever

An early look at the new Center City store which features murals, plants, and a "food-forward" look. 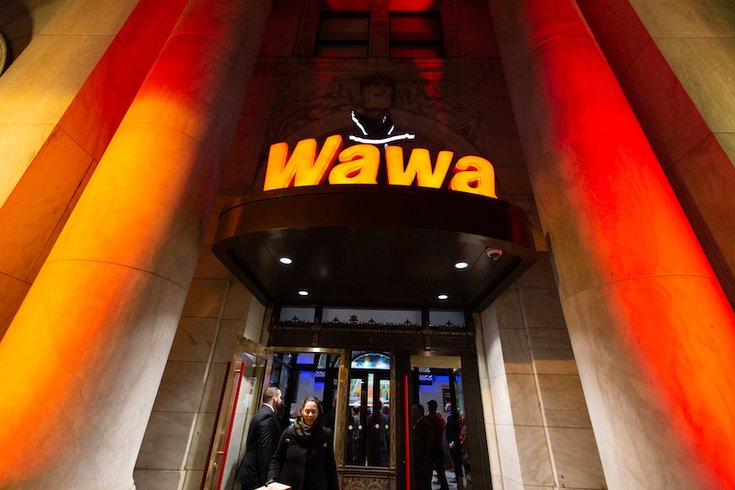 There was a time, not too long ago, when Wawa locations started to disappear from the city of Philadelphia, as the company shifted its focus toward stores with gas stations in the suburbs.

No longer.  Following a recent trend of big new Wawa locations debuting around the city the last few years, Wawa is set to unveil to the public its biggest store ever.

On Friday, Wawa will open its latest major urban location, in the Public Ledger Building at 150 S. Independence Mall W.,  at the corner of 6th and Chestnut. The new Wawa, #8131, is the largest store in the chain's history at 11,000 square feet, eclipsing the one that opened in Washington, D.C., about a year ago. 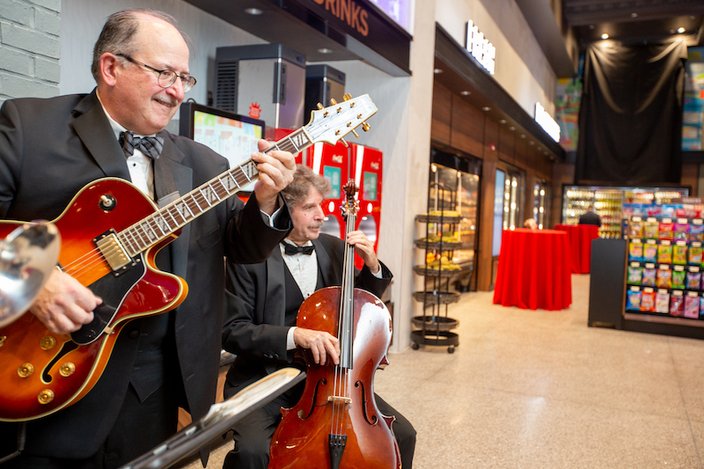 Greg Wright (left) and Bruce Kaminsky (right) perform at the preview of the Wawa opening on Chestnut St. near 6th Wednesday.

A special preview was held Wednesday night, where Wawa executives- and Ben Franklin- talked about what's different, and what's the same, about the mammoth new location.

The new Wawa features most of the things one associates with Wawa- the familiar logo, all of the usual food items, the ordering kiosks, and more.

But it also includes features that are unique: a pair of murals, created specially for the new store in partnership with the Mural Arts Program,  seating areas, a "living greenery wall," and a great deal of specific branding that says "6th and Chestnut." The store, in a rarity, also sells Wawa merchandise, as well as food and beverage items that you won't find anywhere else. 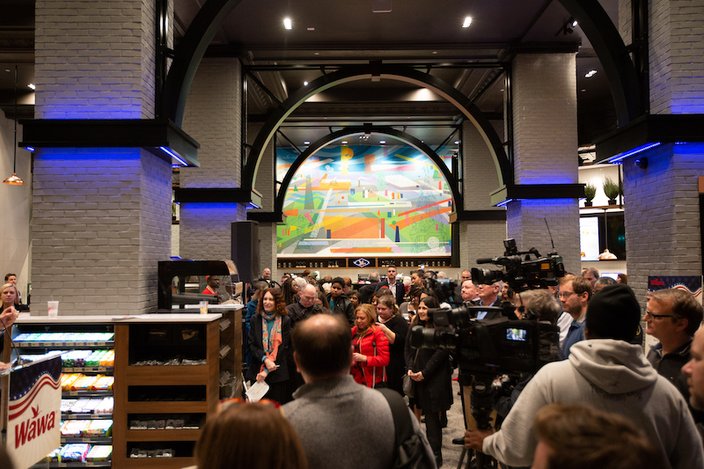 A crowd gathers in front of a mural, sponsored and curated by Philadelphia Mural Arts, at the preview of the Wawa opening on Chestnut St. near 6th Wednesday, December 12, 2018. The store is the largest in the country.

PhillyVoice spoke with Wawa's CEO, Chris Gheysens, about the new store and the road the company took toward opening a store across from Independence Mall.

"This is not a typical Wawa," he said. "The palette, the colors, it feels different from that regard, not just size. So we're looking at design elements, and how they might play a role in future Wawas." He went on to describe the location as the "biggest, largest, most design-forward Wawa in the company's history, right here in your hometown."

He added that the store offers an expanded coffee line, more bakery options than a typical Wawa location, and said that the location will feature a great deal of testing of different food items, for use elsewhere in the chain. 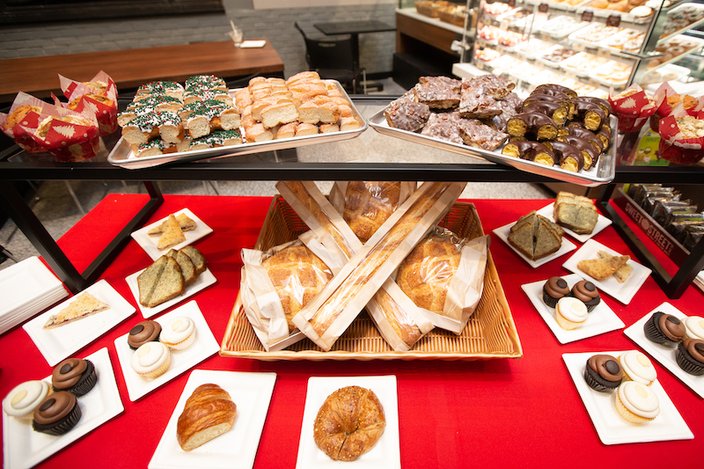 Pastries are served among various other samples at the preview of the Wawa.

"We knew we wanted to be in Old City, and around Historic Philadelphia, and in this area," Gheysens told PhillyVoice. "We've had our eye on this area for a long time. This site came available, we jumped on it quickly, and we were able to add some additional space, and lease an adjacent space. So that's what makes it perfectly big.

"This was about bringing the biggest, best store to our hometown, in a part of the city that we love."

Gheysens also discussed how Wawa embraced the city again, after some city locations were "optimized out of the fleet" years ago. 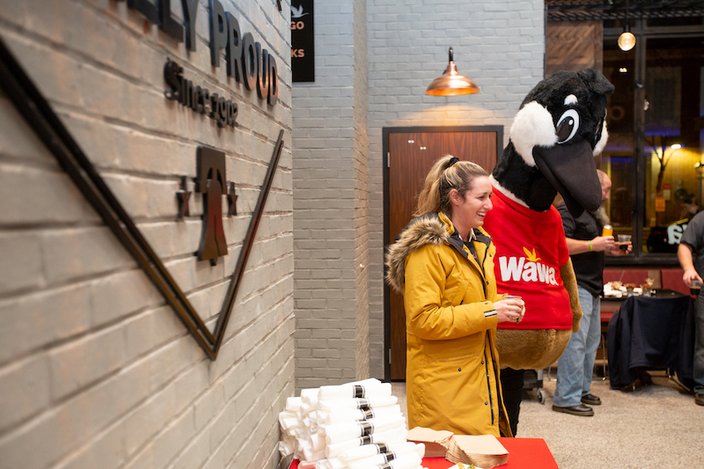 Danielle Hankins, who is on the advisory board for Philadelphia Mural Arts program, stands with the Wawa mascot at the preview of the Wawa opening.

"When you look at everything that's happened in Philadelphia, and really urban centers in the last ten years, we had started planning about five years ago, 'how do we get back in the city?', and that [started] with Broad and Walnut in 2015."

The murals, introduced by Mural Arts Program head Jane Golden, feature "Philly Firsts," including bridges, buildings, and inventions; the murals are also featured on the store's coffee cups.  The murals were created by lead artists Willis Humphrey and Keir Johnston. Humphrey, sadly, passed away earlier this month, and a moment of silence was held for him at the event Wednesday. 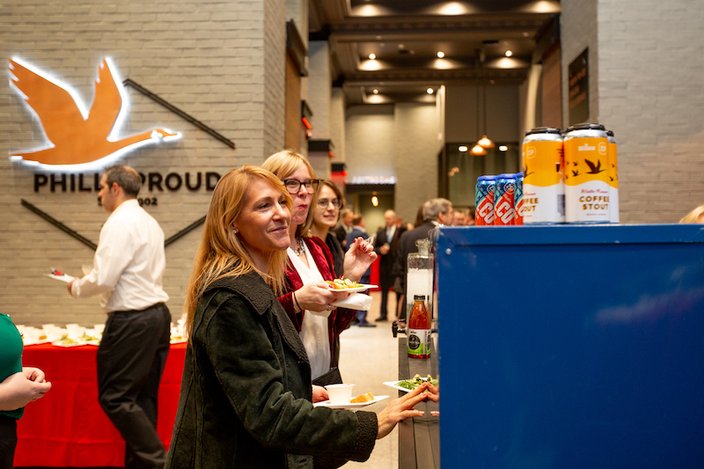 Andrea Bilicic, who works for Bridor, the company that provides baked goods to Wawa, gets a cup of coffee at the preview of the new store.

The preview event had several special guests, including Santa Claus, and Old City's ubiquitous Benjamin Franklin impersonator, both of whom posed for pictures with attendees, as well as Wawa mascot Wally Goose.

The Wawa will host a grand opening on Friday, beginning at 8 a.m. The festivities will include a mini-parade, special giveaways for the first 200 customers, and a ribbing-cutting ceremony.

Coffee will be free all weekend.