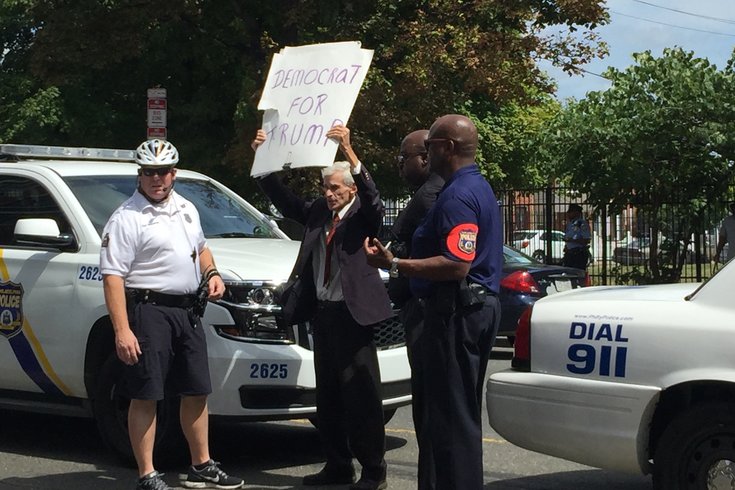 Donald Trump came to North Philadelphia on Friday afternoon for a roundtable meeting with leaders within the city’s African American community.

Hundreds of protestors waited outside for him along a stretch of North Broad Street that featured much police and media presence, but cars weren’t blocked from passing by.

That anticipated scene prompted 71-year-old Jerry Lambert to travel into town from his Bucks County home – toting signs that read “Democrats for Trump,” “Jail Putin” and “I Love Walls” – to exercise his First Amendment right to counter-protest.

There – donning a dark suit with white dress shirt and red, patterned tie – he found himself amongst opposite-minded folks who had come to tell the Republican presidential candidate he wasn’t welcome here, as far as they were concerned.

It had all the makings of a Friday afternoon fracas, and when Lambert walked into the opposing crowd at 1:05 p.m., that’s exactly what temporarily ensued.

When he approached Black Lives Matters’ Asa Khalif – he who had draped a Klan hood over the Frank Rizzo statue a couple weeks back – the latter ripped the signs out of Lambert’s hand and threw them to the ground in the intersection of North Broad and Brown streets.

That prompted a melee that saw police intervention but no punches thrown or shoves leveled. Lambert scrambled to pick his signs off the ground, claiming he’d been attacked.

“I did not touch him!” Khalif told the swarming police, an assertion that holds true to what this reporter witnessed from less than two feet away. “I touched the sign!”

Officers with the civil-affairs unit then escorted Lambert away from the crowd. They gently explained that he’d really put himself in a dicey situation by not giving himself a little distance from which he could be heard.

The officer, after working out a place where Lambert could safely protest, told him that “Sir, I saw two people in the midst of a scuffle” as Lambert again raised his “I Love Walls sign” defiantly.

Before heading over into the middle of the street where he’d be joined by another likeminded protestor – Rich, from Manayunk, who’d just gotten off the subway and randomly found his way here – he told the assembled press his side of the story.

“This black gentleman assaulted me. He grabbed my sign and knocked me,” he said. “I’m trying to get the police to arrest him for assault. This is America. The First Amendment brought me down here today. Everybody has a right to protest peacefully. This is America. I didn’t know this guy was going to try to assault me. How would I know that?”

Then, he was asked if his Walls sign was symbolic of supporting the candidate who would arrive, down the block behind a motorcade and wall of bicycle officers.

“Donald Trump tells the truth. He’s he only candidate who has the nerve to tell the truth about what’s happening in this country. Unemployment is 20 percent, not 5 percent that the people in Washington tell ya,” he said. “Israel has a wall. There was the great Chinese wall of China.” 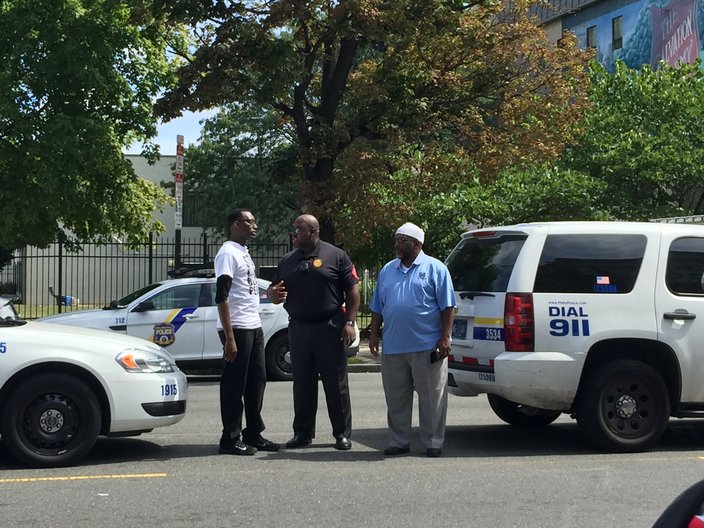 Black Lives Matters' Asa Khalif, left, talks with Philadelphia Police about the incident that saw him remove a counter-protestor's sign from his hands and throw it to the ground.

From there, the protests continued loudly and enthusiastically, even after Trump entered a door at People for People, Inc., an offshoot of Rev. Herbert Lusk’s Greater Exodus Baptist Church. Khalif said he’s happy that he’s matured as a protestor, because in previous years, that scene could’ve gotten hairier.

Standing in the middle of the street – fielding taunts and counter chants – Lambert’s fellow counter-protestor Rich (no last name given) noted that Hillary Clinton is “correct that the country’s already great, but we need to make it greater. That’s where I agree with Donald Trump.”

For his part, Lambert had settled down to the point of writing off the confrontation as what happens when “someone gets overheated. It’s no big deal. I’m alright.”

Asked if he regretted coming out, “I love to come out and exercise my First Amendment rights” was his response.

“If I was in any other country, they’d hang me from a tree. God Bless America. We can’t do this in other countries,” he said. “They have a right to protest, but when someone grabs your property, that’s going over the line, and it almost got there. They have a right to scream and yell, but I do too. That’s what makes our country so great.”

Then, he was asked if he’d been hurt at all in the melee.

“Nah. I got a little shaken up,” he said, before chuckling and adding, “I was hoping they’d really hurt me so I could file a lawsuit and make a million dollars.”