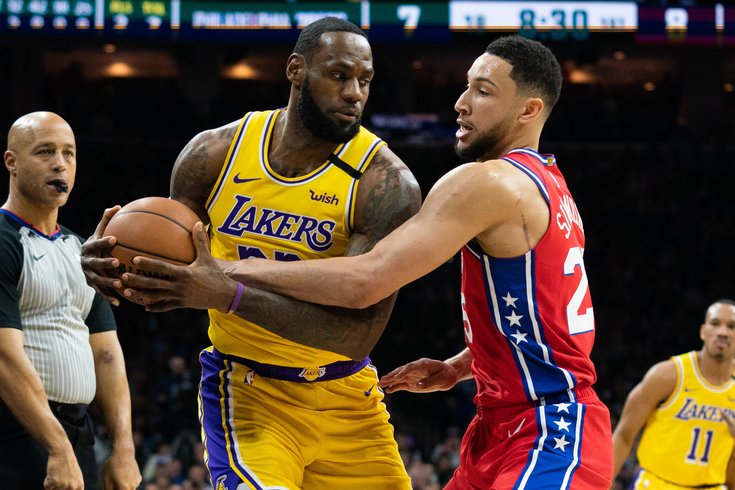 LeBron James made history in Philly last year, a day before the death of Lakers' legend Kobe Bryant.

The Sixers were down Joel Embiid and Josh Richardson, but they shrugged off the West-leading Lakers anyway, earning a signature 108-91 win in a national television showcase Saturday night.

• Kyle Kuzma is going to fall asleep on the Lakers' team plane home to Los Angeles and have a nightmare about guarding Tobias Harris on Saturday night. He had no idea what to do with Harris. When the Sixers forward wanted to use strength, he cowered. When he wanted to use speed, he blew by Kuzma like he was standing still. It got so bad by the second half, when Harris put Kuzma in a blender leading to a Lakers timeout, that the Lakers had to send help on basically every possession Harris had the ball.

This is the guy Philadelphia paid $180 million for. He was sensational on offense, carrying the Sixers during stretches when their three-point shots were not going down. They needed him to carry the offense, and he did. Job well done.

• Ben Simmons' versatility is absolutely astounding in a way we don't talk about enough. He goes from starting point guard to screening forward to small-ball center to LeBron stopper to the guy in charge of bothering Anthony Davis, all within the flow of one game. His rotations and assignments change, his responsibilities are huge night-to-night, and he never seems to wilt under them, except for in the crunch-time scoring department we have all discussed to death.

Simmons clearly relishes going up against LeBron, who he hounded throughout the game on Saturday night, but it was the rest of the Lakers that he punished on the offensive end. The Lakers tried to get away with using the likes of Danny Green to guard Simmons, and he absolutely punished smaller matchups in single-coverage, taking advantage of some extra space in the paint with Al Horford dragging L.A.'s big men out to the perimeter.

The right balance of playmaking and attacking was there. The defensive energy and ability flashed repeatedly. Getting this version of Simmons, by the way, was a group effort — the Sixers made a concerted effort to use him in actions of all sorts, from the post to the perimeter and even as the pick-and-roll handler.

• Starting Shake Milton in a national TV game against the Lakers had the potential to go down as an all-time "What is Brett Brown doing?" moment when the lineups were revealed for Saturday night. After being out of the rotation for months, Milton was expected to start against the team with the best record in the West, and that's a tall task for anybody.

Save for some early jitters, Milton more than held his own against the Lakers, mostly because he does the things most NBA players should be able to do — he can dribble, he can pass, and the Lakers treated him as a credible shooter, which is all the Sixers need to get some value out of him playing.

(It's not the most important thing for a guard to do, but Milton also rebounded with gusto, which is sort of important given Horford's limitations there. Simmons got an and-one opportunity early in the second half because Milton didn't give up on an offensive rebound. Little plays add up.)

• The star of the show in the first quarter, at least by my judgment, was Sixers rookie Matisse Thybulle. Tasked with single-covering James on a heavy dose of possessions, Thybulle more than held his own against one of the game's all-time greats, staying with him step-for-step and forcing LeBron into a series of off-kilter passes and uncharacteristic mistakes, even stripping him early in the game for a runout that unfortunately tuckered out for Philadelphia.

Philadelphia still has to figure out how to turn the Thybulle show into a traveling act, but this kid thrives off of the energy at home and is one of the biggest reasons they have been terrific in the friendly confines of Wells Fargo Center.

• There were two sides of Horford's defense against Davis. When he had to cover him in space and try to get vertical with Davis, it often ended poorly for the Sixers. That's not really something I hold Horford accountable for, it's how Davis beats just about everybody.

Horford was significantly better when single-covering Davis in the mid and low post, leaning into him and forcing him to take tough shot after tough shot around the basket. Davis was so flustered, in fact, that Davis begged the officials for foul calls on at least three or four of his misses in the first half, desperate for someone to bail him out of some terrible individual possessions.

It was a quiet night for Horford offensively up until the final quarter, but he came alive in the final five minutes with Philadelphia sputtering to the finish line, staving off the final push for a road-weary Lakers team. Horford was the closer and the guy tasked with slowing down an MVP candidate, and he acquitted himself well on both fronts.

• If there is reason for hope with this Sixers team, it is this — you have seen the heights they are able to reach when they dial up the intensity. Even when they don't have their full starting lineup, they can get to a level that a select few teams in the league are able of hitting. They are big, athletic, and tough, and that gives you a chance to hang with anyone when the games slow down in the playoffs.

Whether or not they have earned the right to be a "flip the switch" team or not, you can see they are a different beast when their give-a-shit level peaks. They wanted this game, and even while conceding that the Lakers were on the end of a road trip, you have to admit that this version of the Sixers can deliver some haymakers.

• Protecting the basketball hasn't been much of a problem for the Sixers over the last month or so, which has been one of the few positive developments for an offense that has looked sloppy and sluggish basically all season. But they reverted to their worst habits against the Lakers in the second half, allowing Los Angeles to climb back into a game they had no business being in.

Take care of the basketball, gentlemen. It's not a whole lot to ask for.

• Stop me if you have seen me write this 100 times already this season: Mike Scott is basically totally useless when his shots aren't falling, and often much worse than that. The Lakers beat him on backdoor cuts several times in the first half alone, and his defense has swung toward the "actively harmful" variety more often than not this season.

I kid you not, there was a play in the first half on Saturday where Scott had a layup opportunity, siked himself out of it with Davis closing down, and then jumped himself into a turnover against all odds. He is uniquely gifted at creating nothing from something.

The only real difference between Scott and Ennis as shooters, this year and historically, is that Scott has a quicker release. James Ennis has found himself in Brown's doghouse for some unknown reason, and while he's certainly nothing special, he is a much better defender, a much better offensive rebounder, and is not going to make the mental mistakes Scott will, leading to less easy layups for the opponent. I don't get why he continues to get burn.

• Speaking of Ennis, he was justifiably mad when LeBron got away with an obvious foul on a dunk attempt in the second half. But as a role player, you absolutely cannot pick up a technical foul for complaining to the officials about a call. Not in a close game, not in a blowout, not ever. Talk to the ref on the side, voice your complaint and figure out what happened, move on. Can't have that happen.

• If Raul Neto had just focused on catching-and-shooting, where he has been great all season, he would have walked away having had a great night. Unfortunately, he made some downright terrible decisions with the basketball against the Lakers, gifting them some extra possessions in a game that could have ballooned into a blowout had Philly played their cards right.

Brown has put more pressure on their backup guards to carry the Sixers creatively lately with Simmons sliding into a downhill screening role, and that is decidedly not the environment for Neto, who tracks best as a game manager who isn't asked to do too much. The gap between he and Burke as defenders is still there, but they have to figure out a way to find a middle ground here — that might involve new personnel, frankly.

• Zhaire Smith's long-awaited return to the lineup finally came on Saturday night, to the surprise of most of us around the team. That return lasted for exactly three minutes, as Smith picked up a left ankle sprain and was ruled out for the rest of the night by the middle of the second quarter.

It is in these moments where I repeat my belief that it just feels like Smith is never going to get his chance here, even when it's based on a vibe rather than actual facts. Everything that can possibly go wrong for him does without fail. It is a huge bummer for the kid.