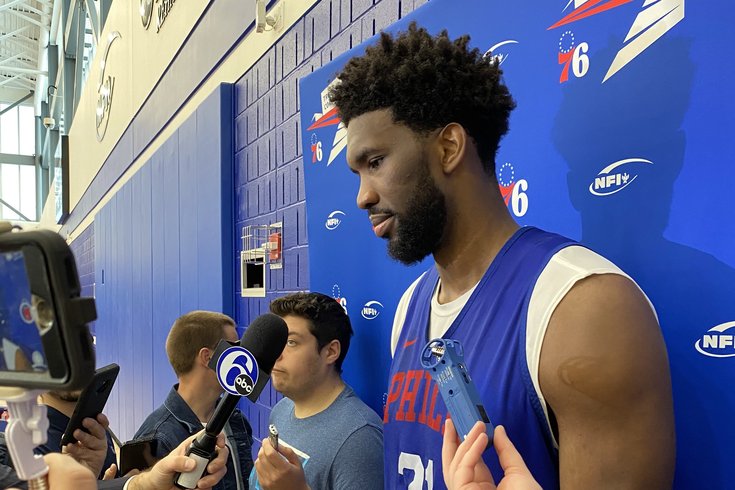 Just how much do the Sixers feel the difference between practices with Joel Embiid and without Joel Embiid?

"A lot," Brett Brown told reporters Friday, moments after we learned the franchise center was a full participant in practice for the first time since undergoing hand surgery. "Say no more. He just comes in with a spirit, he was just named for the third straight year as a starter to the All-Star team, he's obviously highly gifted and highly important to what we do. To get him into the group and have him be around is significant."

Up until Friday afternoon, the most we had seen from Embiid at the practice facility was a series of one-handed drills and conditioning activities, designed to keep him sharp in spite of not being able to go through contact. But over the last week, Joel Embiid ramped up both his on-court conditioning and basketball conditioning, and the timeline for his reevaluation has been shortened a great deal, moved up to this Monday, January 27.

That sets the big man up for a potentially quick turnaround from hand surgery by his own admission. Embiid told reporters typical recovery from the injury he suffered is about a month, but with three games on the schedule next week — vs. Golden State, Atlanta, and Boston — he is working hard to be ready to go at some point next week. It is a multi-step process to get there.

"From time-to-time during the game, you get slapped in the hand, so [I'm] just going through practice and going through those scenarios and seeing how it goes," Embiid said. "I had a little bit of time off where I couldn't do anything with the surgery and was a little bit winded, just got to get my conditioning back... As a professional, you got to take care of yourself, you got to take care of your own business. From summertime to when the season started and to this moment, you got some bike, you got some elliptical, so every night you just got to come in and get some sweat on and your heart rate up."

Embiid, who says he will continue to put himself through two-a-day workouts in order to prepare for a return, went through a series of on-court drills in the time reporters were allowed in the facility on Friday, from basic catch-and-shoot work to more concentrated post drills vs. Roy Hibbert to defensive reps against pick-and-rolls.

Embiid is still out here doing some offense/defense drills pic.twitter.com/tVZrVhvHog

He is moving well, though that protective wrap/cast you see on his hand will stay there for the foreseeable future, an addition to his on-court gear he will have to get used to wearing. Embiid is no stranger to added accessories, having worn a carbon-fiber mask during Philadelphia's first playoff appearance and various braces and sleeves around his troublesome knee in the past.

The clearest sign of his seriousness may have come when he was asked about his selection as an Eastern Conference All-Star starter, the third straight time he has been awarded that honor. While Embiid said he was optimistic about his chances to play in the game and appreciates the rare opportunity in front of him — he's the first Sixers player since Allen Iverson to be named an All-Star starter three straight times — he made it clear that his team's current position in the standings is the first, second, and perhaps third thing on his mind.

"I'm not too concerned about what the All-Star Game is going to look like. Right now we're sixth in the East. Hopefully, by next week I'm able to play," Embiid said. "We need all these wins because we're sixth. That's not good. That's not where we saw each other at the beginning of the year."

To climb out of that sixth position, the Sixers need to ace the stretch immediately in front of them, as it contains meetings with teams who they need to clinch tiebreakers over in order to surge up the standings by the end of the year.

While the season series has been clinched over the Boston Celtics, a date with the Miami Heat looms a little over a week from Friday, with the Heat currently holding a 2-1 lead heading into that final meeting. Four games back in the loss column from Miami, every one of these games is critical if they hope to find themselves where they thought they'd be when the season began.

No one is more important in those meetings than Embiid, a walking matchup nightmare for most of the teams ahead of them in the standings. He is their anchor defensively, a foul-drawing machine, and he is the guy who locks down the paint and makes opponents fear driving deep into Philadelphia territory, forcing teams to play the slow, rugged style the Sixers tend to thrive in.

With Josh Richardson out, Philadelphia will be forced to dig deep into their back of tricks in a national TV showdown against the Lakers on Saturday, with Zhaire Smith expected to be available and Shake Milton remaining in the rotation after a lengthy absence.

That alone illustrates the challenges in front of Philadelphia. They used every last day of the two-way contract they handed to Norvel Pelle, who still has a chance to be signed to a real deal for their stretch run, and players who have been day-to-day afterthoughts need to be ready to go in what will probably be their most talked about and publicized game of the year.

Sitting sixth in the standings, it feels like now or never for Philadelphia. No one seems to be more in tune with that than the big fella, who appears dead set on making his return as soon as the powers that be will allow it.

"I'm not happy with where we're at," Embiid said, "so I just got to keep praying and hoping it gets better so I can get back out there with my guys.