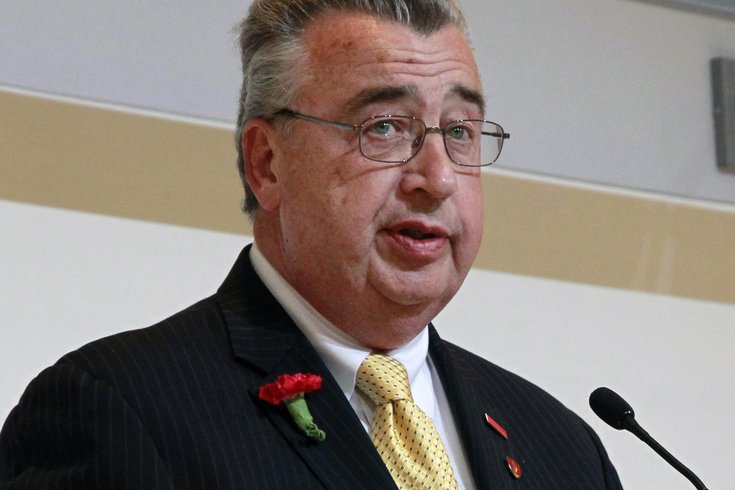 In this July, 24, 2012, file photo, John Sheridan, President and Chief Executive Officer of The Cooper Health System addresses a gathering in Camden, N.J.

Nearly six months after the high-profile deaths of a New Jersey hospital CEO and his wife, investigators in Somerset County have determined the incident was a murder-suicide, NBC 10 reports.
On Sept. 28, 2015, firefighters discovered the bodies of Cooper University Health System CEO John Sheridan Jr., 72, and his 69-year-old wife, Joyce, inside their Montgomery Township home. They were found in the home's master bedroom, which was in flames when firefighters arrived.
The conclusion reached by investigators is that Sheridan stabbed his wife multiple times before dousing the bedroom in gasoline and setting the room on fire. According to the final report, John Sheridan's cause of death is "sharp force injuries and smoke inhalation," while his manner of death is deemed to have been suicide.
For months, the Sheridan family disputed the account reached by investigators, countering that the deaths were a double-murder perpetrated by a third party, Philly.com reports. (See the family's response to the report below.)
The investigation team, led by Somerset County Prosecutor Geoffrey D. Soriano, concluded that there was no forced entry into the house and that while Joyce Sheridan had defensive wounds to her hands, an autopsy performed on John Sheridan did not reveal similar wounds. From the report:

This intensive investigation involved a number of law enforcement agencies, numerous interviews, a variety of forensic analyses and examinations which took time to consider, prioritize and evaluate. Many possible scenarios and theories were considered. The evidence in this case supports the conclusion that John Sheridan fatally stabbed Joyce Sheridan, set the fire, and committed suicide.

John Sheridan joined the Cooper University Health System in 2005 and became its president and CEO in February 2008. He is credited with leading major health initiatives in New Jersey, including a partnership with MD Anderson Cancer Center, launching a new medical school, and supporting revitalization efforts in Camden. Joyce Sheridan was a retired school teacher who previously served at South Brunswick High School.

The Sheridan family on Friday released a statement, issued by sons Mark, Matt, Dan and Tim, reiterating their belief that the conclusion by investigators fails to provide answers to several facets of the case. They announced that they will have more to say in the coming days and weeks and that they plan on filing a lawsuit to challenge the ruling of a murder-suicide.

“From the outset we have said that no one wants answers about our parents’ deaths more than we do. The conclusion announced today fails to provide those answers. It is nothing more than an expedient way for the Prosecutor’s Office to close its file and put an end to its embarrassing bungling of this murder investigation in the hope that our family, the citizens of Somerset County and the press will stop inquiring about what actually happened.

Our parents taught us to stand up for what we believe in and to defend those who cannot defend themselves. This conclusion seeks to convict our father based on little more than rank speculation. We will be filing a lawsuit challenging the conclusion announced by investigators. We will not allow our father to be convicted based on guesswork resulting from an inadequate and incomplete investigation simply because he is not here to defend himself.”

The family will have more to say in the coming days and weeks, but for today, asks that the press respect their privacy as they continue to deal with the loss of their parents.

• Our father was stabbed five times including one wound that cut his jugular vein in addition to suffering five broken ribs and a chipped front tooth. Despite initial reports from investigators that all of his wounds were very shallow and caused no significant injuries, at least two of his stab wounds were found to be inches deep and were caused by a knife that has not been recovered. Moreover, one of those wounds cut his jugular vein. If this is a murder-suicide; where is that knife and why was it not recovered at the scene after multiple searches?

• Dr. Baden identified the deepest of the stab wounds to our father, the cut to his jugular and the existence of a third knife with a blade that is much narrower than those that were recovered in the bedroom. Only after Dr. Baden’s autopsy did investigators acknowledge the existence of a third knife and the severity of his injuries. In fact, it was only after Dr. Baden’s autopsy that investigators re-took the crime scene to search for the weapon used to stab our father. How were the wounds identified by Dr. Baden and the existence of that knife not identified in the initial autopsy/investigation thus requiring the investigators to perform a second search of the house a week after our parents were murdered? If investigators claim to have known about the third knife, then why was it necessary to re-take the house and perform a second search for that weapon?

• Four doors to the house were unlocked and blood is evident upstairs and downstairs in the house. Why did investigators not dust for fingerprints anywhere in the house and why did they not search for trace blood evidence outside of the bedroom or examine any of the blood outside the bedroom?

• Two knives were recovered at the scene - in addition to the knife that is missing - one used to kill our mother and a large bread knife that was unused. Why would anyone need three knives to commit a murder-suicide? Why would a third small (missing) knife be used to stab our father after a much larger knife was used to kill our mother? Again, where is the third-knife?

• Investigators have told us that like the strong woman she was, our mother fought for her life and had numerous defensive wounds on her hands and arms. They have also told us that there are no scratch marks on our father and no blood transfer from our mother to our father. How is it possible that our mother fought so hard for her life yet failed to leave a single scratch mark on her supposed killer and none of her blood was transferred to his clothes?

• Our father was found under an extremely heavy armoire. How did someone who supposedly committed suicide and had suffered multiple stab wounds and broken ribs end up under an armoire?

• Investigators claim to have interviewed 183 people as part of their investigation. They had complete access to our parents’ medical records, phone records, emails and text messages. In spite of this, they have identified no motive for our father killing himself let alone his wife of 47 years. They concede there were no marital problems, no infidelity, no health problems, no financial problems and no drugs in our father’s system. There was no note and their lives on the day they died were like any other. They had a face time conversation with their disabled grandson at 5:00 pm and our father was sending work emails at 7:30 pm and preparing for a meeting at the hospital the next morning.

• In a meeting in late January with the family, Dr. Baden and the family’s attorneys, Prosecutor Soriano conceded that “had no idea what happened in that room.” How do investigators conclude this was a murder-suicide when the Prosecutor concedes he cannot find the weapon used to stab our father, there is no motive for our father to kill our mother or himself and he has “no idea what happened in that room?”