Is it OK to jump atop a car that flees after hitting you and your bicycle? 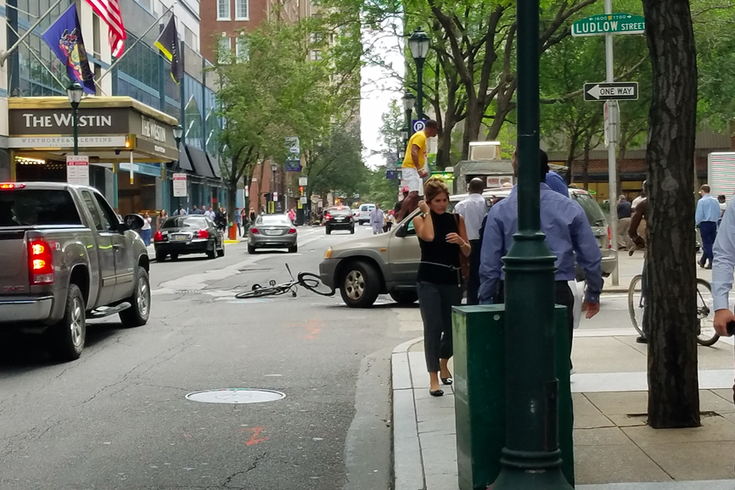 A bicyclist jumped atop the hood of an SUV that he told police had struck him and kept going in Center City on Tuesday, Aug. 30, 2016. No charges have been filed in connection with the confrontation as of the following afternoon.

As photos go, it could become the Tiananmen Square moment for Philadelphia’s ongoing wars between bicyclists and motorists. Or not. Let's give that some consideration.

Posted to the bicycling subreddit by Redditor “Wissahickon” on Tuesday afternoon, the photograph shows a man wearing a yellow T-shirt, white shorts and black hat standing atop the hood of a SUV. (I cannot post it here as I haven’t gotten permission from the poster, but you can see it via this link.)

The title of the post goes a long way toward explaining why this unusual scene came about: “Biker hit by SUV at 17th & Ludlow, jumps on hood of car to stop them from leaving.”

While stodgy journalistic-sourcing guidelines tend to spurn such dependence for citing details, we'll now share what a commenter on the post – which also made its way to the Philadelphia subreddit – had to say about what unfolded:

“I saw this after the fact. The story from a security guard at Liberty Place is that the driver hit the guy on the bike and tried to flee. My understanding is that the windshield was broken in the accident, but I could be wrong. An ambulance came for someone. The consensus of people standing around gossiping seemed to be that the driver was at fault.”

To that, another commenter noted:

“That was my impression as well, cops within a minute put the driver in cuffs but then let him out of them again so I was confused and had to go back in my building. When I arrived the biker was telling them not to get back in their car and try to leave, so it seemed that way.”

Yet another commenter reported that the bicyclist did in fact kick out the windshield and that police were on the scene for an hour getting witness statements.

Live at the scene, however, was Jonathan Hernandez, who shot a couple photos of the fracas. 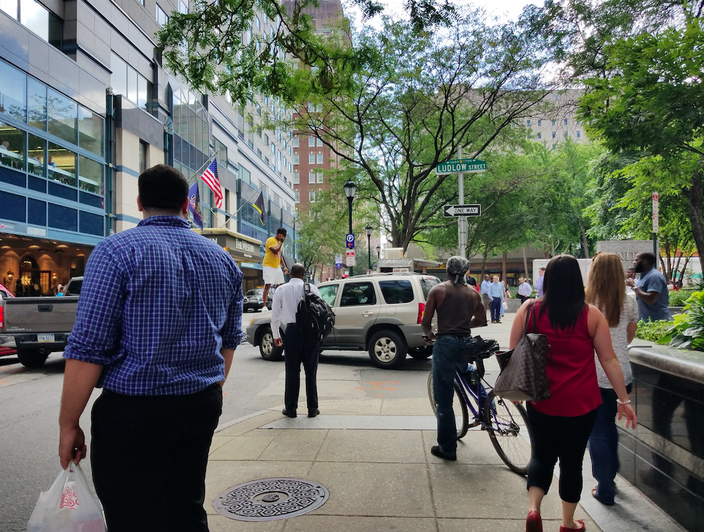 A crowd gathers in Center City to watch an altercation between a bicyclist and a motorist he claimed had struck him with his car and fled the scene on Tuesday, Aug. 30, 2016.

He said he was heading back to the office after lunch when he "heard a lot of commotion and saw some guy in yellow really high up," as if he was standing atop something.

"He was pretty upset, threatening the driver and passenger not to get back into the car and leave," he said, presuming that the pair had previously attempted to flee, though he didn't see that happen. "It looked for a second like they were going to fight, but they all ended up waiting for the cops to arrive. People were all over the place watching this."

As bicycling posts are wont to do, this discussion can easily devolve into a playground-level spat quickly, but we just had to know more. So, we reached out to the Philadelphia police public-affairs unit to determine what, if anything, they knew about it.

Officer Christine O'Brien, a department spokeswoman, said the accident report was filed around 1:30 p.m. Tuesday. It states that a 44-year-old bicyclist from Philadelphia claimed he was struck by a 2001 Mazda Tribute at 18th and Chestnut streets.

That was followed up with a vandalism report filed by the driver, a 27-year-old man from the suburbs who said the bicyclist "kicked the window in."

While no charges have been filed against either, the investigation remains open, said O'Brien, noting the bicyclist was treated for leg pain at Thomas Jefferson University Hospital.

Now that we know the details, let’s discuss the etiquette herein.

As in, was the bicyclist justified to hop atop the vehicle after the collision?

Randy LoBasso of the Bicycle Coalition of Greater Philadelphia took the high road when asked that very question.

"Obviously as an organization, we wouldn't advocate for jumping on top of cars," he said, adding, "but I have no idea what happened before the picture was taken."

Police also advised against taking such vigilante-justice actions when involved in such situations.

To this mind, though, the initial inclination was to answer maybe, but with a heavy caveat: If it's the only way to prevent a criminal from fleeing the scene of their crime, such times call for such measures. But, c'mon, one needn't kick out a windshield; that's beyond the pale.