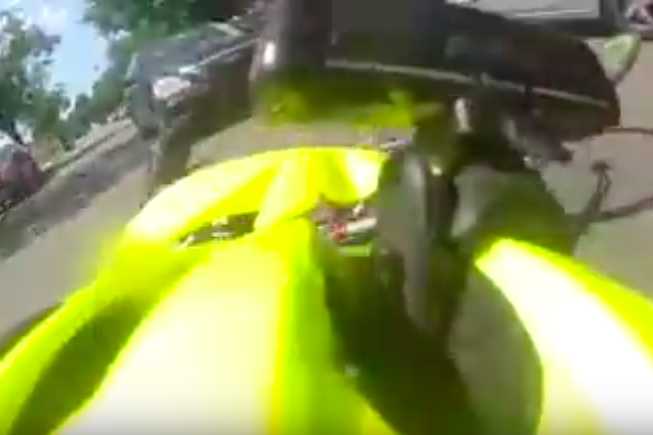 A still shot from a road-rage incident reported by bicyclist Cat Walshak on Sunday, June 19, 2016.

Having seen our January post about a road-rage confrontation between a driver and bicyclist on South Broad Street, Cat Walshak reached out to PhillyVoice on Tuesday with a video of a similar incident in which she was involved on Father's Day.

“This past Sunday, I was run off the road by an irate driver, threatened and then the driver fled the scene," she initially wrote of the 11 a.m. incident on North Seventh Street near Girard Avenue. "I caught the altercation on my helmet cam and would like to share my video with you.”

Noting that she filed a report at the 26th Police District and then with the District Attorney's Office, she’s pessimistic about charges being filed against a driver. Walshak was able to identify the driver via the vehicle's license plate and the fact that one of her bicycling friends is a tenant at a property owned by the driver's mother.

Walshak said she was among four bicyclists heading back from "deep South Philly." After crossing Callowhill Street, the Lexus "honked at us and passed us closely" but they didn't think much of it because of the regularity of near collisions between bikes and cars turning right at intersections.

A couple blocks later, though, the honking started again.

"We hear 'honk, honk, honk' and then a car speeding up in the middle of the street. My friend darts out of the way, hits my wheel and I go down. Before I stand up, the driver is screaming at me," she said. "That's where the video picks up."

When the landlord-mother/tenant dynamic becomes clear, the driver – whose name is being withheld from this story since charges have not been filed – threatened her friend "to pack his bags" since his "lease is up."

As you can see in the video below, the confrontation is over within minutes, but Walshak called 911 and was told that she could take video evidence to the nearest precinct, which was the 26th District.

When she arrived there, Walshak said she was told that she had to call 911 to get a response to the scene, which had been cleared several hours earlier. She then called the DA's office, and was told, "they don't handle this kind of evidence."

Suffice it to say, Walshak – an avid bicyclist who injured her knees in the incident – doesn't hold out much faith that the driver will be held accountable.

“As far as I can tell, no charges will be filed,” she said. “This maniac sped up on me and two other cyclists honking like mad and came within inches of running down my friend, causing him to dart out of the way and unfortunately he caught my wheel and I went down.

“It's unsettling to think that even with positive ID, license plate, and video evidence, nothing can be done to prevent or punish this type of behavior," she said. "The police can do nothing so I decided to put this video online to remind cyclists and drivers to share the road and not be aggressive lunatics.”

Below is Walshak's NSFW video of the incident. (Warning: The video contained in this post features profane language and on-screen captions.)