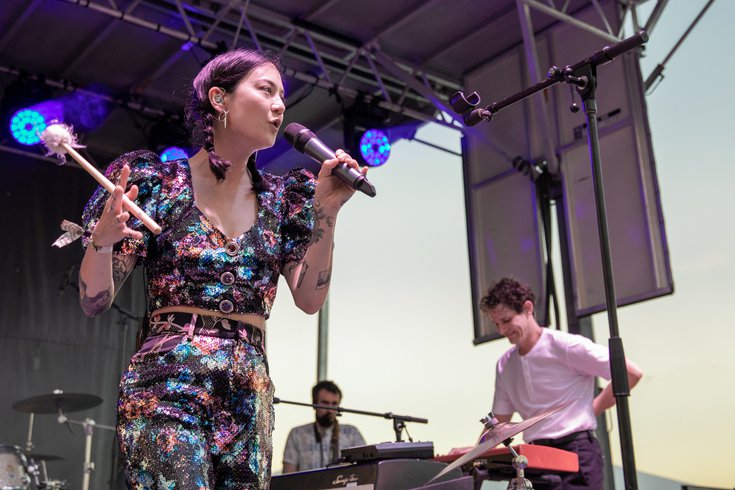 Michelle Zauner, singer of Japanese Breakfast, has her own ice cream flavor. Zauner partnered with Noona's Ice Cream to create 'Persimmon Jubilee,' which took its name from the Philly band's latest album.

Michelle Zauner is following the advice of the lead single from her band's latest album: Be sweet.

The Japanese Breakfast singer partnered with Noona's Ice Cream to create "Persimmon Jubilee," a limited-edition fall flavor that is a new take on a Korean classic. The ice cream is inspired by Japanese Breakfast's critically acclaimed album "Jubilee," which was released in June, and the holiday Chuseok, commonly known as Korean Thanksgiving.

"After talking with Michelle about our favorite type of ice cream and favorite way of enjoying persimmons, we both jumped at the idea of creating a classic Sujeonggwa-flavored ice cream with dried persimmons," Noona's founder Hannah Bae wrote in an Instagram post. "Sujeonggwa is a chilled Korean sweet punch made with dried persimmons soaked in a tea base of fresh ginger root and cinnamon sticks and finished with a sweetener like honey.

"What you're going to find in Noona's Persimmon Jubilee ice cream is a beautiful orange persimmon-colored ice cream with a ginger cinnamon taste with little candied persimmon gems speckled throughout," Bae continued. "We candy the persimmons with cane sugar and honey, then chop them up into tiny little gems you'll find speckled throughout the ice cream."

A pastry chef by trade, Bae created Noona's in 2016 with the goal of showcasing flavors that represented her Asian-American heritage, which she said were hard to come across in grocery stores. Noona's offerings range from Thai Iced Tea to Makgeolli Blues, Toasted Rice, Yuzu Blossom and more.

"We're committed to making all our sweet treats in a way that creates a space for people of color and reforms our food culture," Bae says on the company's website. "The unique story of where an ingredient or flavor comes from is compelling and should be celebrated."

The sentiment that inspired Noona's is at the heart of Zauner's bestselling memoir, "Crying in H Mart," published in April by Knoph to rave reviews. The book chronicles Zauner's relationship with her Korean heritage, from struggling as one of the few Asian-American students at her school in Eugene, Oregon, to finding comfort in her roots through food after her mother died of cancer when she was 25. Zauner also recounts her time spent at Bryn Mawr College and working in Philadelphia's restaurant industry while navigating the city's music scene.

"Crying in H Mart" spent more than 10 weeks on the New York Times' bestseller list. In June, The Hollywood Reporter confirmed that the memoir will be adapted into a feature film.

As of Wednesday, Persimmon Jubilee was available for preorder online for Noona's Test Kitchen club members only. It's not clear when the ice cream will become available for those without memberships, but Bae said it will be an online exclusive "until further notice."