During his final verse, Uzi kept his back to the audience as he rapped about his lavish lifestyle 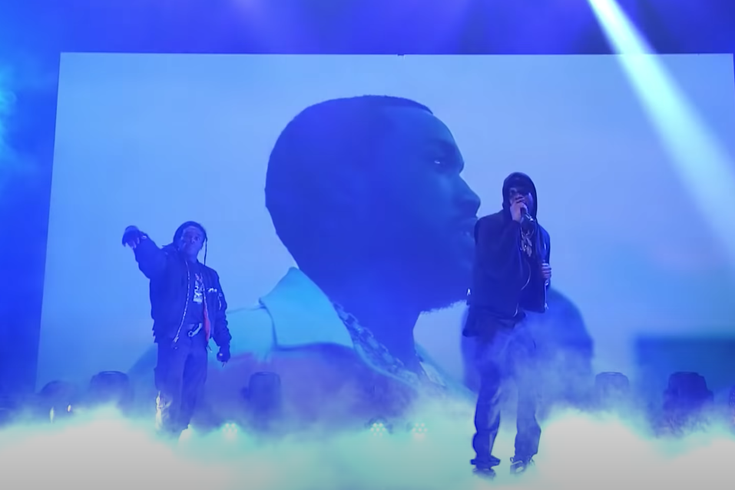 Meek Mill was joined by fellow Philly rapper Lil Uzi Vert for a performance of the single 'Blue Notes 2' on 'The Tonight Show.'

Meek Mill's new album is just around the corner, and in anticipation of its release, the rapper was joined by Lil Uzi Vert for a performance Monday on "The Tonight Show."

The Philly rappers performed the single "Blue Notes 2," which was released earlier this month and will be featured on Mill's new album, "Expensive Pain."

Mill opened the performance by introducing himself as "fresh out of Philadelphia" before jumping into the track's lyrics.

Mill rapped his lyrics as he moved around the smoke-covered stage, but the more peculiar performance may have come from Uzi.

The rapper began by lying on the ground before getting up to rap one of his verses. Uzi also did pushups while Mill rapped his lyrics. He even rapped his final verse with his back to the audience.

The performance also included clips in the background from the single's music video. Filmed in Philly this summer, the video features Mill and Uzi riding four wheelers and dirt bikes through the city's streets while police helicopters circle overhead.

Mill's lyrics in "Blue Notes 2" focus on his time in prison, which ignited his advocacy for criminal justice reform upon being released. Uzi's lavish lifestyle is the subject of his final verse, during which he raps about a Rolex President watch and a bumblebee-colored Lamborghini.

The roughly four-minute track is a follow-up to Mill's 2016 song "Blue Notes," which appeared on his album "DC4."

"Expensive Pain" will be Mill's fifth studio album and first full-length production since he released "Championships" in 2018. The album will be released Oct. 1.

The 18-track album also includes the single "Sharing Locations," a song featuring Lil Baby and Lil Durk that was released last month. Its artwork is based upon an original painting by artist Nina Chanel Abney.