The Make the World Better show is returning to Philly on Saturday, July 23 from 6-11 p.m. 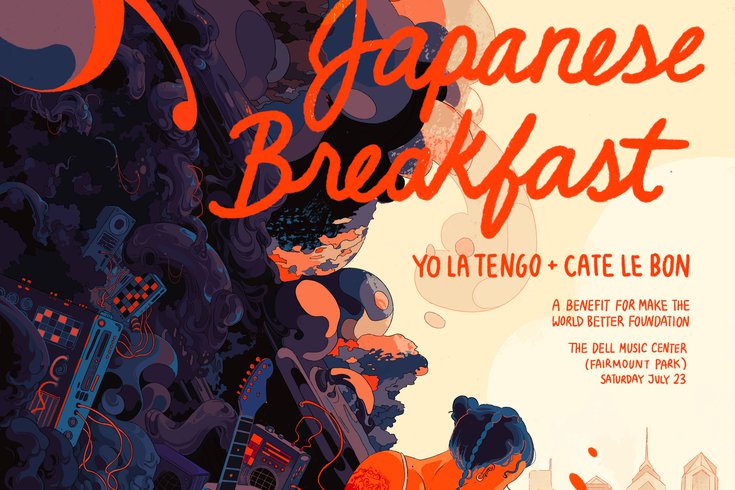 Japanese Breakfast, Yo La Tengo and Cate Le Bon will play the Dell Music Center in Fairmount Park on July 23 to support the Make the World Better foundation.

Former Eagles defensive lineman Conor Barwin's Make the World Better Foundation has put on some great benefit shows over the past decade to fund the revitalization of Philadelphia's parks and recreation centers.

The tradition will continue this year, as the foundation announced on Monday that indie standouts Japanese Breakfast and Yo La Tengo will play a benefit concert at the Dell Music Center in Fairmount on July 23. They'll also be joined by singer-songwriter Cate Le Bon.

Michelle Zauner, Japanese Breakfast's front woman, is a Bryn Mawr College graduate who spent some of her formative songwriting years in the region, which continues to be a spiritual home for the singer. Zauner and the band shared the news of their participation in the event on Twitter Monday morning.

The absolute perfect gig 🥲 Philly I told you we had something special for you.

In the past, Barwin held his benefit shows at Union Transfer – where Zauner once worked as a coat checker – and had acts ranging from Kurt Vile and Mac Demarco to Parquet Courts and The Suffers.

The concert transitioned to Dell Music Center in 2017 with a show from Philadelphia's The War on Drugs, which Barwin had to miss because he'd joined the L.A. Rams that year and had a game to play.

Tickets for this summer's show, which will be produced in partnership with 88.5 WXPN, go on sale Friday, April 22.