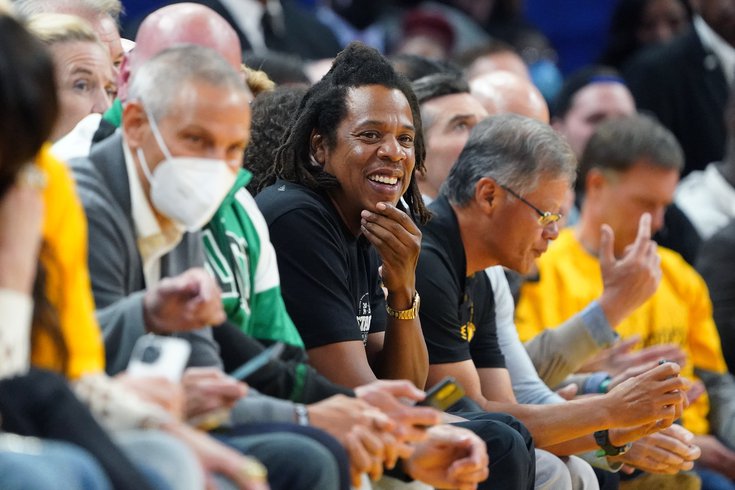 Jay-Z discussed becoming a businessman, being a father, and whether or not his fans should expect new music from him in a rare sit-down interview with Kevin Hart.

Kevin Hart and Jay-Z sat down with glasses of cabernet sauvignon and Ace of Spade champagne to discuss how the 83-time Grammy nominated rapper evolved into a corporate businessman, his reluctance to buy into social media, and how he handles parenthood.

During the 50-minute interview on Peacock, Jay-Z recollected what his life has become since the days of living in the Marcy Housing Projects in the Bedford-Stuyvesant neighborhood of Brooklyn, New York.

Jay-Z said that he's proud of his nearly 30-year career and his transformation from a musician to a billionaire. He has earned his money through real estate, alcohol and a sports agency.

Starting with the co-founded record label Roc-A-Fella Records, Jay-Z went on to build a generational fortune, which he credits to being curious and interested.

"A lot of times, we settle in our position," he told Hart. "We think we've made it. But, there's another door to open, not just for yourself but for the next generation."

Here are the biggest takeaways from Hart's interview, an introspective look at a rapper who seldom speaks publicly.

Is he retired from making music?

Jay-Z retired briefly following his 2003 project, "The Black Album." He said he wasn't good at retirement and realized that he was just burned out and needed a break. So the short answer is no; he is not retired. However, he has no immediate plans to release any new music.

"It's open to whatever," the rapper said. "Maybe it's not an album; maybe it is. I have no idea; I'm just going to leave it open."

He added that music is a gift and who is he to take it away from people. The artist last appeared on rapper Pusha T's "Neck and Wrist" earlier this year.

Jay-Z launched his solo rap career with his debut album "Reasonable Doubt" in 1996. Over the past 26 years, he has released 13 solo projects and five collaborations, including 2011's "Watch the Throne" with Kanye West and 2018's "Everything is Love" with his wife, Beyonce.

How has fatherhood changed his life?

A conversation with anyone that has become a parent begins with some variation of how they found their true meaning of life since their kids were born. Jay-Z is no different. He told Hart that becoming a father changed everything for him.

The father of three said he loves his kids more than anything in the world. However, he said time is the most valuable thing people have, and he had to reevaluate things that took him away from his children and forced him to miss their development.

He and Beyonce's children are 10-year-old Blue Ivy, and 5-year-old twins Rumi and Sir.

Self-awareness is big for Jay-Z. He said that one of his most significant evolutions is looking at himself and wanting to grow. The rapper admitted that growing up in housing projects teaches you to have a hardened shell.

"I've been taught everything but emotional intelligence; that's not something you're taught growing up in the projects. You are taught to survive," he told Hart. Jay-Z credits his growth to therapy and the ability to look at other people's perspectives.

Jay-Z also talked about wanting to have majority ownership in a sports team one day. He previously had a minority stake in the Brooklyn Nets.

The 52-year-old's Made in America Festival, which takes place Labor Day weekend, will be on the Benjamin Franklin Parkway from Sept. 3-4.

Jasmine Sullivan and Lil Uzi Vert are performing and headliners include Tyler the Creator and Bad Bunny.