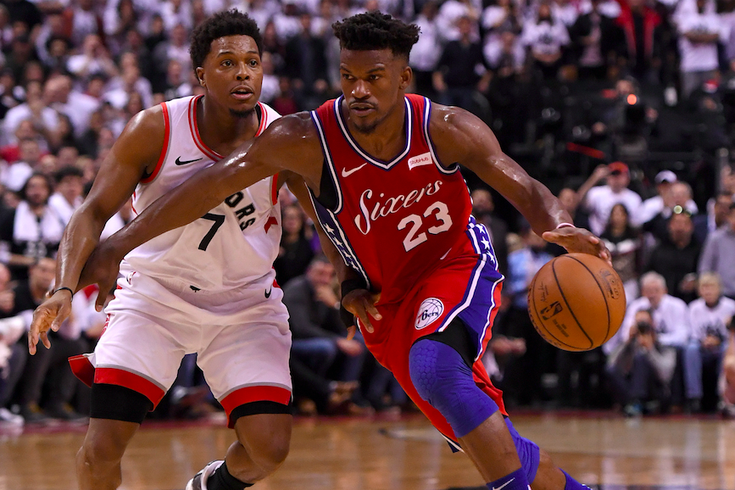 Jimmy Butler is now a member of the Miami Heat after the Philadelphia 76ers signed and traded him for Josh Richardson at the start of free agency. The move was made to recoup something in return for Butler, who was an unrestricted free agent — and apparently wanted to leave town. Former WNBA star Lisa Leslie called Butler out for the decision.

Despite willing the Philadelphia 76ers to Game 7 of the Eastern Conference Semifinals, Jimmy Butler decided this summer he would rather continue his career as "the guy" for the Miami Heat.

Sixers fans have largely been reserved in their criticism of Butler, who was dealt in a sign-and-trade that landed Philadelphia a talented young player in Josh Richardson. The trade compensation was solid enough not to be too mad about it, and the Sixers managed to add Al Horford and retain Tobias Harris. It's a different team without a proven closer, but the Sixers' future still looks bright.

Former WNBA star Lisa Leslie was not as kind in her review of Butler's free agency decision.

The Los Angeles Sparks legend and Olympian appeared on CBS Sports yesterday to discuss the big changes across the NBA landscape. When she got to Jimmy Butler and the Heat, she didn't hold back her feelings on the matter.

"He decided to take his talents down to Miami. Lights, Camera, Action. That's what he wanted. Kind of a loser move to me."@LisaLeslie isn't a fan of Jimmy Butler's move to South Beach. #WNTT pic.twitter.com/QMHIsfM5Zn

"I'm just going to be honest," Leslie said. "My opinion: a very selfish move for him to leave a team, when you talk about the 76ers, who possibly had an ability to go and win, especially in the Eastern Conference."

Butler's decision to leave Philly is going to be one that defines the rest of his career, whether he likes it or not. During free agency, PhillyVoice's own Kyle Neubeck reported that a source close to the situation said the Sixers were prepared to give Butler a full five-year max contract that many thought was the ticket to keeping him in Philadelphia.

The Heat are a resilient, well-coached and well-run organization, but they lack the kind of talent that will put them near the top of the Eastern Conference. Jimmy Butler is 30 and is still an excellent player. Whether or not Miami can surround him with enough talent before his game starts to fade is the big question hanging over Butler's future. Had he stayed in Philadelphia, the Sixers arguably had the best roster construction for the sunset of his career.

At the end of the day, last season was fun. Butler was a big part of that equation. There were signs that his brash personality might cause issues with Brett Brown and eventually Ben Simmons on the court. The Sixers simply went all-in and they came close to defeating the eventual NBA champs in Toronto. It'll be interesting to see how Philly receives Butler when he returns to the Wells Fargo Center in a Heat uniform.