By Michael Tanenbaum
PhillyVoice Staff
Television Health
While the majority of Americans support mandatory vaccinations for children to prevent the spread of disease, a sizable segment of the public still believes it should be a decision made by parents.
Given the outbreak of measles in California, which the L.A. Times reports has risen to 156 cases, late night host and immunization supporter Jimmy Kimmel is fed up with the anti-vaccination movement. Calling out Los Angeles residents in particular who ignore the advice of trained medical professionals, Kimmel spoke his mind in a set-up for a public service announcement filmed with actual doctors.
It starts out pretty gentle and sterile, the way doctors tend to share knowledge we might resist, but they all quickly lose their patience and demand common sense, for the love of the eternity they spent in medical school. And the children, of course.

Notably, millennials are among those most likely to doubt the safety of vaccinations and link them to autism.

Polling data from the Pew Research Center study, cited above, breaks down where Americans stood in the debate as of August 2014. 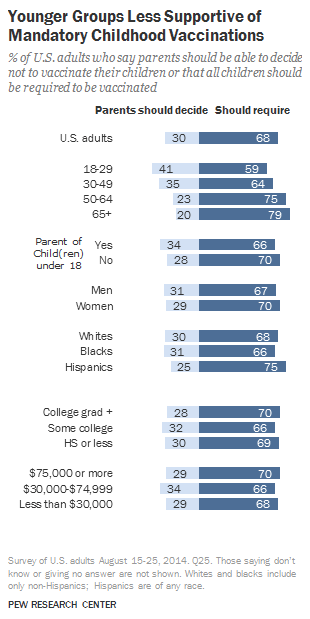 A newer poll conducted by CNN this month, post-measles outbreak, has 78% of Americans favoring mandatory vaccinations.

If Kimmel's PSA adds anything to this trend, the debate may soon be sufficiently decided, at least in the court of public opinion.