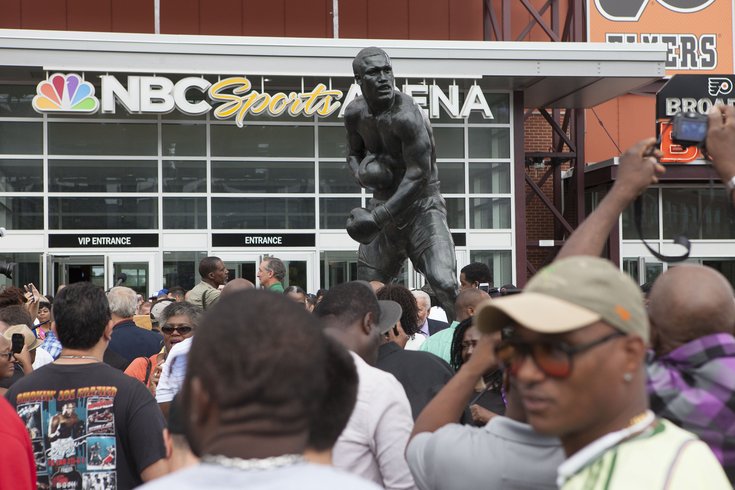 A 12-foot bronze statue honoring Philadelphia boxing legend Joe Frazier being unveiled outside the Xfinity Live! complex on September 12, 2015. The artist Stephen Layne recreated Frazier in mid-punch, depicting the moment after Frazier landed the punch that knocked down Muhammad Ali in the fifteenth round of their fight on March 8, 1971, at Madison Square Garden.

Nearly seven years after “Smokin’ Joe” Frazier lost his battle with liver cancer, one of his daughters launched an effort this month to get a North Philadelphia street named in his honor.

Last Thursday, Weatta Frazier Collins – one of nine living children of the legendary boxer – started knocking on doors at homes and businesses along Glenwood Avenue near the North Broad Street property that once housed Joe Frazier’s Gym (and is now a furniture store).

She also launched an online petition, titled “Philly Needs a Joe Frazier Blvd.,” and will speak at a community event Thursday night, in an attempt to build support for the effort.

“I’m a little biased, but Joe Frazier was such a special person in so many ways,” she told PhillyVoice during a Wednesday morning interview. “When he was alive, quite a few things that could have been done in his honor weren’t.”

Sure, the city finally saw a Joe Frazier statue arrive outside XFinity Live! in 2015. Frazier Collins, who also started “The Legacy Exists” scholarship fund, has continued working to honor her father’s memory.

In addition to the nascent street-renaming effort, she has reached out to the Citizens’ Stamp Advisory Committee seeking a Joe Frazier commemorate stamp through the U.S. Postal Service.

For the time being, she’s focused her efforts on ceremonially renaming all, or some, of Glenwood Avenue in his honor.

She said she’s reached out to community members, nearby business owners, City Council President Darrell Clarke and others to get the process started. The effort is in the very early stages.

In the neighborhood, she’s gotten signatures on a petition. She said she faced a limited level of opposition from business owners hesitant to formally rename the street because it would impact their stationery, advertising and other matters.

Frazier Collins said they told her they’d be more comfortable if it was an honorary placard as opposed to an official overhaul, and she's more than open to that sort of compromise.

She will speak during a 6:30 p.m. Thursday meeting at the 12th and Cambria Recreational Center (2901 North 12th Street) to make her pitch and field questions from immediate neighbors.

“Hopefully, I’ll get their blessing,” she said of the meeting to which she was invited by a community activist. “I don’t think I could get Broad Street changed, so it’d be easier to just add his name to Glenwood.

“If the community does not want it, I’ll accept that. I’ll just continue on other projects to continue honoring my father’s legacy. He was so modest and humble. I’m just trying to make my dad proud.”