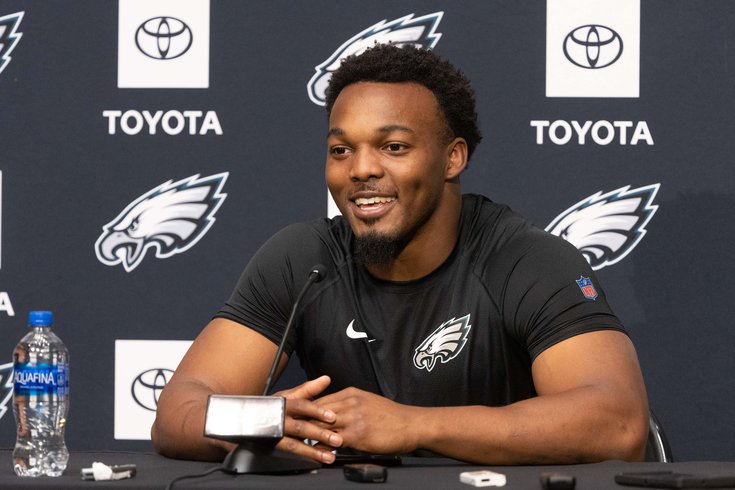 The template for Nakobe Dean’s future in Philadelphia is his high-profile college stint at Georgia, which featured success from both team and personal perspectives.

Turning the Butkus Award and a college national championship into All-Pro status and a Super Bowl championship is storybook stuff and Dean, the Eagles’ third-round pick, just might have the instincts and intelligence to pull it off.

There will more than likely be a learning curve along the way, however, something former Eagles defensive coordinator Jim Schwartz used to call the “startup costs” with young players.

It is interesting how Dean, the No. 83 overall pick, is being perceived locally by many, not so much as a value with a high ceiling but as a de facto additional first-round pick, all because most “draft experts” went through the entire pre-draft process labeling Dean exactly that.

And groupthink has a way of poisoning the well when it comes to the public perception in the town square.

Hindsight is the only judge that matters in these types of circumstances and we now have a contextual understanding when it comes to Dean’s fall from a “surefire first-rounder” to a third-round lottery ticket.

Many NFL teams put the red flag on Dean, at least in the early rounds, and the splashiest star on the best defense in recent college football history, which produced five first-round picks by itself in 2022, had to wait longer than just about anyone expected before he came off the board to Philadelphia.

Howie Roseman claimed that the Eagles would have taken Dean at 51 if Cam Jurgens had not been available which was part hyperbole and part actually liking the player.

“When we were on the clock in the second round, these guys will tell you, we had two players – it was Cam and it was Nakobe Dean,” the GM said. “And unfortunately for our fans at the time, you know, I'm always going to go [offensive line], [defensive line]. That's how we roll. That's how we build this thing.”

Talking with a number of personnel executives both pre-and post-draft you would find it hard to find anyone who didn’t like Dean, an extremely smart and instinctive player, but many tried to add valuable context when it came to the 5-foot-11, 231-pound All-American’s label as a potential first-rounder.

The truth is even before any medical concerns were raised, the NFL wasn’t quite as high on Dean as most draftniks, who had him jockeying with Utah’s Devin Lloyd as the two LBs expected to have first-round grades.

Dean was considered to be more of a bridge pick by the league and really more on an early Day 2 pick with the caveat of "it only takes one" to actually get him in the first round. The concerns pushing Dean down a bit were centered on size and athleticism with most scouts believing the other two UGA LBs were actually better athletes and most graded Dean’s teammate, Quay Walker, as the higher pro prospect.

Channing Tindall, the third Georgia LB, went No. 102 to Miami, 19 slots after Dean was taken by the Eagles.

Georgia, of course, had the five defenders taken in the first round with edge rusher Travon Walker going No. 1 overall to Jacksonville, nose tackle Jordan Davis being selected by the Eagles at No. 13 followed by Walker, DT Devonte Wyatt at 28, also to the Packers, and safety Lewis Cine to Minnesota at No. 32.

To the slaves of college production (and believe me those still exist) Dean’s “slide” was perplexing.

Then the medical issues started to creep into the conversations. Admittedly the much-discussed pec injury (which was strained or slightly torn depending on who was talking) seemed short-sighted because that would just set the timing back a bit on a high-level talent in a worst-case scenario.

The bigger issues for some teams were potential degenerative conditions in a knee and shoulder.

The Eagles, of course, weren’t one of those organizations and Roseman made a big deal of insisting Dean would be ready to go for OTAs which the rookie was.

Considering that Philadelphia didn’t do much in the spring, however, and Dean started out very slowly on the third team was hardly putting any punctuation on the short-term pec issue.

We’ll see what’s up with that later this month and if Dean is completely healthy as the Eagles claim, many expect the rookie to quickly usurp T.J. Edwards or Kyzir White in the lineup and the plan is to cross-train Dean at both the MIKE and WILL LB positions.

From there it’s on to the odds of Dean immediately turning into the kind of difference-maker some project as a rookie.

Recently, ESPN surveyed more than 50 league executives, coaches, scouts, and players to get a consensus top 10 at every position.

When it came to off-ball LBs, five of the top 10 weren’t first-round picks, including No. 1 overall, Darius Leonard of Indianapolis, who went No. 36 overall in 2018.

There were three third-rounders among the top 10 and both serve as templates for Dean because each came into the NFL with similar reputations as smart and Instinctive LBs. No. 3 was San Francisco’s Fred Warner and No. 6 was New Orleans’ Demario Davis.

“I wouldn’t say it came natural,” Dean said of his instincts. “A good bit of it is from studying, but everybody studies the game. Everybody should be studying and taking care of their business in the film room. I feel like, as far as off-ball linebacker and the middle of the defense, I’ve been playing it for a while. You kind of get certain feels for an offense or a formation that tendencies come from.”

Warner was an immediate starter with the Niners while Davis waited for Year 2 with the New York Jets. In the case of Warner, he was a middle-of-the-road player as a rookie, however, (grading out as No. 46 of 91 eligible LBs that season by Pro Football Focus) and didn’t really take off into elite status until his third season. Davis was more of a late-bloomer, taking until Year 5 to turn into a top-20 level LB.

Past is typically prologue and there will be a ramp-up period for Dean both as a player and potentially when it comes to playing time with Edwards, White, and perhaps even Davion Taylor, around to handle reps in the short term.

None of that will be overcome by some nebulous belief Dean should have been a first-round pick. Only the NFL dictates that kind of sentiment.

The Eagles really like Dean. Just don’t expect Leonard or Warner to show up on Sept. 11 in Detroit.

Startup costs are just part of the process.

“I’m on a new team, in a new system with different people. Other than that, it’s still football,” Dean said. “Of course, the details are a little bit more put underneath the magnifying glass. Other than that, football is football. Everybody is better, everybody is good, and I expect that.”