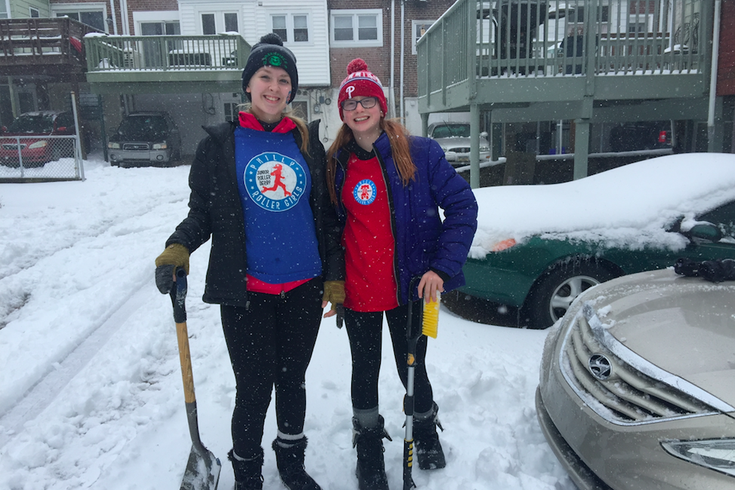 'Motley Dru' and 'Ruff Red' used Tuesday's snowstorm as a chance to raise money for their May trip to Kansas with the Philly Roller Derby Juniors team.

The online alert went out in East Falls just after 12 p.m. Tuesday, as the projected blizzard officially relented.

“If you still need shoveling,” Christina Spangler wrote on the neighborhood’s NextDoor.com page, “I have two daughters ready to help!”

She went onto explain that her daughters – 15-year-old Dru and 12-year-old Quinn – were raising money for a May trip to Kansas as part of the Philly Roller Derby Juniors. (but only after the girls provided free shoveling services at their own home, of course).

It didn’t take long for neighbors to write back expressing a willingness to help with the cause.

Traversing an unplowed alley as what seemed to be frozen rain fell almost horizontally, PhillyVoice caught up with “Motley Dru” and “Ruff Red” who were shoveling their way toward a few more bucks along Vaux Street.

Both sported Philly Roller Girls gear as they explained what got them into the sport in the first place, and why they need to raise money to get to the competition in the heartland.

Motley Dru said it all started about four years ago when she was over at a friend’s house.

“She said she had to leave early from a sleepover because she had roller-derby practice. I’m like, ‘What is roller derby?’ It sounded so strange to me,” Dru said. “So, I went to a practice, and it was really cool.”

Ruff Red picked up on it a little after big sis did, prompted by a question from her mom. She wasn’t too sure at first, but seeing Motley Dru out there on skates led her to believe it was “pretty cool.”

Motley Dru said what drew her in was that it was a contact sport between girls her age, an unusual offering in the youth sporting world.

“I feel really aggressive and tough when I play. It makes me feel good,” she explained, noting that playing the drums offers another like-spirited outlet.

“It’s exhilarating,” added Ruff Red of roller derby, for which practices are held in a Germantown warehouse where the team moved from a rink in Camden, New Jersey.

Two weeks ago, they did roller battle at a tournament in Tampa, Florida, but realized regular trips in pursuit of their craft could get quite expensive.

Hence, Tuesday’s idea to head out in the neighborhood with shovels to raise money to get to the Memorial Day Mayhem event in Topeka, Kansas. They estimate the costs at $400 per player, but parents and chaperones need to accompany the 16-person squad.

They’ve done T-shirt sales and other fundraising efforts like Skate-a-thons to help. Their teammates also were shoveling to raise money on Tuesday.

When they finished on Vaux, they were heading over to another house on nearby Queen Lane and then four more stops.

“This is the most labor, definitely,” said Dru who goes to Central High while Quinn attends GAMP in South Philadelphia. “It’s fun. I’d probably just be inside if I wasn’t doing this.”