Just enough snow may fall to screw with Friday's AM commute 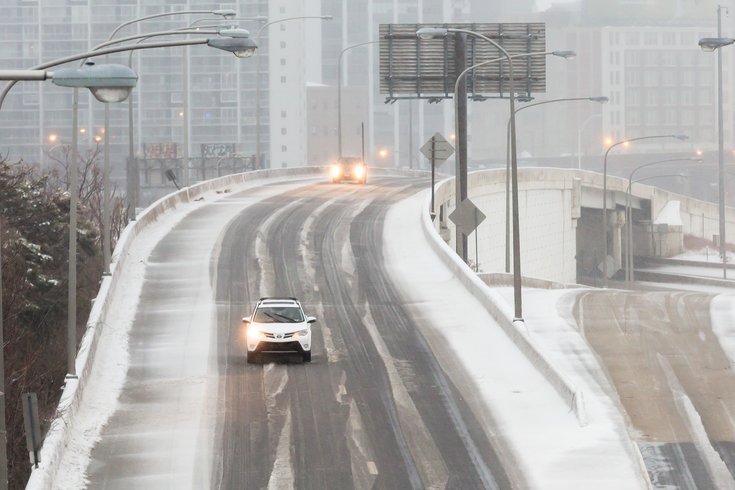 Snow and freezing rain coats the westbound lanes of I-76 in Philadelphia on the morning of March 14, 2017.

Some folks woke up Thursday morning to see vestiges of a surprise snow flurry event overnight and hear reports of black ice accidents on some area roadways.

Well, more of the white stuff is expected in the early morning hours on Friday - and perhaps Sunday.

Light snow will begin after midnight and continue into Friday morning's commute in Philadelphia and much of the Delaware Valley.

After a sunny Thursday, clouds will increase into the night, with light snow making its arrival overnight from the west and southwest, according to forecasters. Snow will likely still be falling when the sun comes up, but then a transition to rain is seen as the storm moves north. The precipitation looks to end by late morning or noon, but there is potential for an in-between period of freezing rain in some locations.

According to the National Weather Service, from 1-2 inches of snow accumulation is likely in a band stretching from Chester County and into South Jersey. Less than an inch of snow is seen for the areas to the north and south of that band, and no more than a light glaze of ice is expected in those places that see some freezing rain.

With the timing of the storm, and its likely impact on the morning commute, the weather service said a winter weather advisory could be declared in the coming hours.

Some light rain may linger in parts of South Jersey on Friday.

Low temperatures on Thursday night look to be in the 20s, rising into the high 30s and lower 40s on Friday, forecasters said.

According to AccuWeather, another storm on Sunday into Monday could mean more snow for the Philadelphia region. Two possible scenarios are setting up for this later storm.

Right now, AccuWeather meteorologists suspect the storm will track northeastward toward the central Appalachians and the upper mid-Atlantic coast. If that happens, several inches to a foot of snow are possible north of Philadelphia, including the Pocono mountains. Along the I-95 corridor, it would be mostly rain.

The other scenario is a more eastward path that could bring several inches of wet snow or a heavy wintry mix to southeastern Pennsylvania, Delaware and much of New Jersey. Such a track could mean mostly snow and little to no rain to from Washington, D.C., to New York City, and lead to "major travel disruptions due to slushy and snow-covered roads and deicing delays with possible flight cancellations at airports," AccuWeather reports.

It gets much colder next week with a possibility for more wintry precipitation, said forecasters.

Here is the 7-day forecast for Philadelphia:

Thursday night: Snow, mainly after 1 a.m. Low around 29. Northeast wind around 7 mph. Chance of precipitation is 80 percent. New snow accumulation of around an inch possible.

Friday: Rain, snow and freezing rain before 11 a.m., then a chance of rain. High near 41. Northeast wind around 7 mph. Chance of precipitation is 80 percent. Little or no ice accumulation expected. New snow accumulation of less than a half inch possible.

Friday night: A chance of rain and snow. Cloudy, with a low around 34. Northeast wind 6 to 8 mph. Chance of precipitation is 50 percent. Little or no snow accumulation expected.

Saturday: A chance of rain and snow before 1 p.m., then a slight chance of rain. Mostly cloudy, with a high near 42. Northeast wind around 6 mph becoming calm in the morning. Chance of precipitation is 30 percent. Little or no snow accumulation expected.

Saturday night: Mostly cloudy, with a low around 31.

Sunday: A chance of rain. Mostly cloudy, with a high near 45. Chance of precipitation is 50 percent.

Sunday night: Rain likely before 1 a.m., then rain and sleet likely. Cloudy, with a low around 30. Chance of precipitation is 70 percent.

Monday: Partly sunny, with a high near 36.

Monday night: Partly cloudy, with a low around 19.

Tuesday: Mostly sunny, with a high near 33.

Tuesday night: Partly cloudy, with a low around 18.

Wednesday: Mostly sunny, with a high near 30.