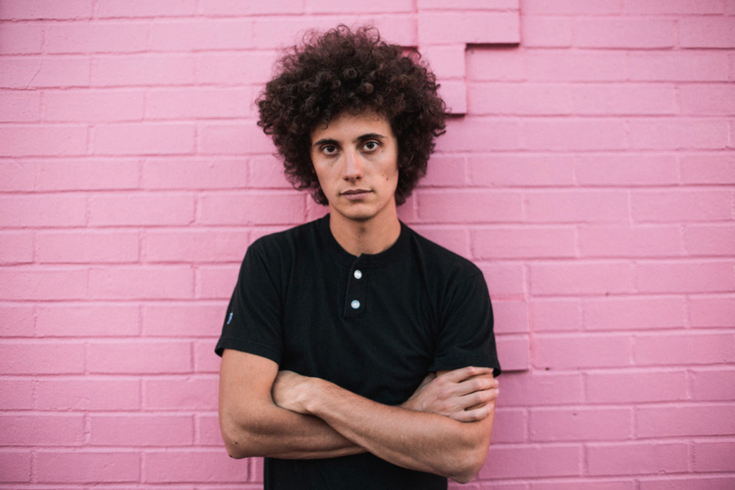 Ron Gallo will open for Hurray For The Riff Raff Friday at World Cafe Live.

Ron Gallo ripped off his shirt and bounced around the small stage at the Austin club Lamberts as the crowd of about 300 roared in approval. The emerging singer-songwriter from Marlton, N.J. amped it up to 11 while showcasing songs from his solo debut, “Heavy Meta.”

Sweat dripped from Gallo’s fro and fans in the front pumped their fist as he delivered his intense and irreverent garage rock during his South By Southwest showcase last month.

The former songwriter for the Philadelphia-based band Toy Soldiers isn’t precious about anything onstage. For much of his set, Gallo lives in the moment.

“There is a good bit of improv in what I do every night,” Gallo said while calling from his Nashville home.

“I don’t worry about the (sonic) details when I’m up there. Nobody gives a shit about making sure the EQ on the fourth synth line is perfectly audible. The human element is way better. The last thing I want to do is play it safe. If you want to play it safe, why make music?”

Gallo, who lived for a decade in Center City before leaving for Music City last year, is a throwback. Gallo doesn’t care about anything but his music.

“It doesn’t matter what people think about me,” Gallo said. “It’s about taking chances.”

“Heavy Meta" benefits from Gallo’s desire to take risks. The rave-ups are gritty, fierce and at times amusing. “Why Do You Have Kids” and “All the Punks are Domesticated” are laugh-out-loud funny.

“But it’s all true,” Gallo said. “Punk rockers aren’t like they once were.”

While growing up in the white, middle-class enclave of Marlton, Gallo was stirring it up from an early age.

“I was always getting in trouble at school,” Gallo said.

“I was always being an asshole, talking back to teachers. I didn’t get the mentality of where I grew up, which was – go to school, get a good job, and buy a house.”

Then why did Gallo earn a degree in Communications and Mass Media from Temple University?

But Gallo, who did not grow up in a musical household, caught some bands that changed his life while he attended Temple.

“I remember seeing Man Man and they were psychotic in the best way and I saw Dr. Dog early on and they were incredible,” he said. “I knew what I wanted to do.”

Toy Soldiers, which formed in 2007, crafted an amalgam of rock, blues, and soul. But Gallo is a completely different animal as a solo artist.

“What I do now is more reflective of what I’m about,” Gallo said.

Gallo found himself just as he decided to leave Philadelphia.

“I needed to get out of Philly,” Gallo said.

“After 10 years in that town, it became stagnant for me. It’s a dark place for me. I don’t like what complacency does to people. I felt stifled there, so I packed up my shit and moved.”

But Gallo is looking forward to seeing some old friends when he returns this Friday, April 21.

“I won’t have time for much more than going to the show there,” Gallo said.

“But it’ll be good to run into some people. Philly made a huge impact on my life, but you have to move on at some point.”

Gallo will open for Hurray For The Riff Raff Friday at World Cafe Life. For ticket information, click here.