'We were pretty disgusted' by the Bucks County woman's testimony, one juror said. 'It was pretty embarrassing to watch her testify.'

After a series of contentious, "heated" deliberations, a Philadelphia jury returned a mixed verdict Friday in the assault trial of Kathryn Knott, finding the Bucks County woman guilty of simple assault and conspiracy to commit simple assault against Zachary Hesse, one of two victims beaten as they walked to get pizza in Center City on Sept. 11, 2014.

Knott also was found guilty of reckless endangerment against both Hesse and his boyfriend, Andrew Haught, but acquitted of aggravated assault, a felony and the most serious charge against her.

Hesse and Haught also reacted without visible emotion, maintaining their composure as the verdict was read.

The jury – eight women and four men – reached a verdict around 11:30 a.m. on its third day of deliberations. Bellinger, one of three jurors who spoke afterward with reporters, described deliberations as "heated," saying the jury compromised to reach a decision. Another juror, Gina Cook, described the process as "three days of fighting, vomiting and getting sick."

Bellinger, a 67-year-old Catholic woman from Logan, said she was offended by Knott and the group that encountered the couple, noting many went to Catholic school together. She was emotional as she spoke afterward, expressing remorse for the victims.

"I just felt so bad for them," Bellinger said. "This is so unnecessary. It just never should have happened. Everything about it was wrong. It's just not fair to them. It's not fair to anyone with any sensibility, whatsoever."

Knott, wearing a light blue sweater and black slacks, exited the courtroom at the side of her father, Karl, a police chief in Chalfont Borough, Bucks County. The victims exited among several supporters two minutes later, calmly passing a throng of reporters without offering any remarks.

Knott was the last of three defendants to face charges in the beatings of Haught and Hesse. Her two co-defendants – Philip Williams and Kevin Harrigan – pleaded guilty to their involvement earlier this year. They were sentenced to probation and 200 hours of community service at an LGBT center. 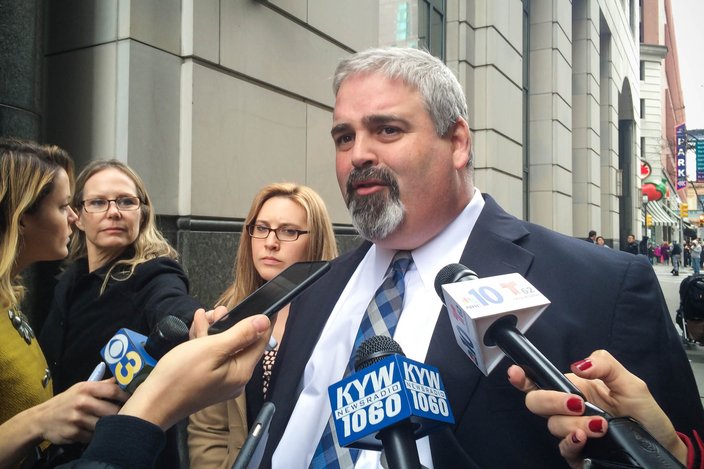 Assistant District Attorney Mike Barry says prosecutors are satisfied with the mixed verdict returned by jurors in the Kathryn Knott assault trial, saying it shows Knott was not an innocent bystander in the beatings of Andrew Haught and Zachary Hesse. (John Kopp / PhillyVoice)

Assistant District Attorney Mike Barry said he was satisfied with the verdict, thanking the jury for its service. He said the victims are happy to finally put the incident behind them.

"The jury clearly found her guilty of everything we said she did regarding her own actions – that she punched Zach Hesse, that she was inciting this and that she was creating a reckless situation," Barry said. "The main thing this shows to us here is that Kathryn Knott was not an innocent. She was not standing there doing nothing. She was involved just like everybody else was."

Defense Attorney Louis Busico said he was not surprised by the split verdict, but called it a "good one" that defense considers "a win." That's because Knott was exonerated of six of the 10 counts against her, including both felony counts.

The jury acquitted Knott of committing aggravated assault against both Hesse, who sustained minor bruises to his face, and Haught, who was knocked unconscious – with broken cheekbones and a fractured upper jaw that needed to be wired shut for eight weeks. It also exonerated her of simple assault against Haught and three of four conspiracy counts.

"It was a very contentious case," Busico said. "Everyone knows why this case was sensationalized, why this case sort of morphed into something beyond, perhaps, another simple assault case. This jury had to struggle mightily with many concerns, many considerations."

Knott is scheduled for sentencing on Feb. 8. Though she faces possible jail time, it appears unlikely considering the sentences handed to Williams and Harrigan. She remains free on bail.

Barry declined to specify the sentence prosecutors will seek, saying he needs to consult with the victims and review the statutes. But he said Knott declined a plea deal similar to those accepted by Harrigan and Williams, causing the victims the stress of a trial.

"Miss Knott chose not to let it be over for them," Barry said. "All they ever wanted was an admission that something wrong was done to them and to have it be over with. She didn't give them either of those things."

Busico said Barry has the right to seek maximum penalties, but he suggested the prosecutor use common sense in doing so.

"She exercised a constitutional right," Busico said. "She went to trial – that's her right. I hope it's not at the point in this country that we punish people for doing what the Constitution says we can."

Busico declined to state his sentencing request until the hearing. But he took the moment to stress that Knott is not homophobic.

It was pretty embarrassing to watch her testify. She was trying to explain away these tweets. They were just embarrassing. – Juror Aristeo Duenas, on Kathryn Knott's testimony

"There isn't a fiber of her being that is homophobic," Busico said. "She doesn't view people as gay or straight. She views them as a person and then makes her determination about the individual based on how they present – not who they go home to."

Prosecutors had contended that Knott hit Hesse and shouted homophobic slurs when a group of 15 of her friends encountered the couple at 16th and Chancellor streets after eating dinner at La Viola on Sept. 11, 2014.

Prosecutors entered into evidence four tweets posted to her Twitter account prior to the incident, alleging they demonstrated Knott's history of using homophobic language. One stated: "@krissstenxoxo the ppl we were just dancing with just turned and mafe out with eatch other #gay #ew."

Bellinger, the jury's forewoman, said she found Knott's Twitter history irrelevant, but said she was "stunned" that the rest of the jury was not ready to convict Knott quickly. Juror Aristeo Duenas said the panel reached an agreement on the assault charges relatively quickly, but got tripped up by the more complicated conspiracy charges.

The jury asked 10 questions during its deliberations, including requests to review eight videos played during the trial and the police statements given by the alleged victims, several witnesses and Knott, who never made one.

"We could have easily been a hung jury, but we decided that we needed to come to a decision so she didn't get to just walk away again," said Duenas, a 33-year-old Brewerytown resident. "Something had to be done. We used the evidence and based our decision on that. We didn't get as much as we (he and Cook) wanted, but we got something." 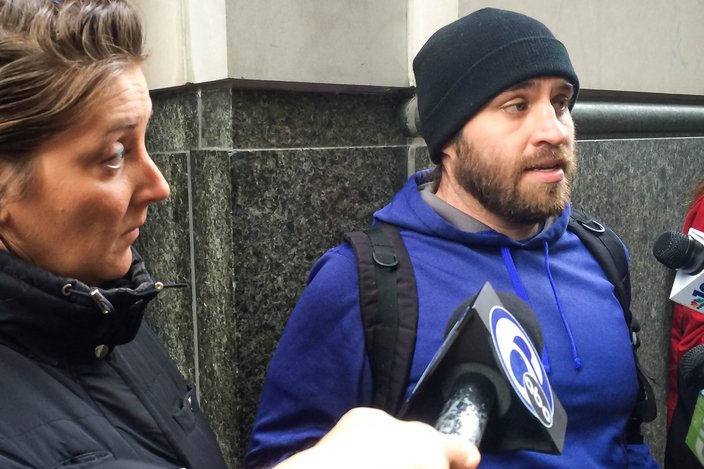 Knott took the stand Wednesday, testifying that she never struck anyone or used homophobic slurs. She said she was near the middle of the group of friends when the incident broke out behind her. She said she saw a member of her group on the ground but remained on the periphery.

After Williams hit Haught, Knott said she turned and ran the other way. Four other defense witnesses – all part of her group – testified they did not see Knott strike anyone.

Duenas said he and other jurors were not impressed by Knott's testimony, particularly as she tried to explain the tweets made to her Twitter account.

"We were pretty disgusted," Duenas said. "It was pretty embarrassing to watch her testify. She was trying to explain away these tweets. They were just embarrassing.

"She would have been a better character to me if she would have been like, 'I messed up. I said those things. It was stupid.' But I felt like she had this kind of air of invincibility, where whatever she said was going to happen."

Bellinger had a similar – and passionate – reaction.

"She saw nothing wrong in what she did – and that is so bad," Bellinger said. "She didn't appear apologetic. It was like what is the big deal? And it was a big deal. It was a big deal for everybody. I am so offended by everything about her."

Knott and the testimony of the defense witnesses contrasted considerably from that given by the victims and independent witnesses.

Hesse testified that the incident began when Harrigan called out to him, "What is that, your f---ing boyfriend?" More words and pushes were exchanged before several people began throwing punches at him, including Knott.

Two independent witnesses also testified that they saw Knott strike Hesse. Haught said he saw Knott swinging at Hesse before he lost his glasses and was knocked unconscious by Williams.

"We did the best that we could," said Cook, a 36-year-old woman from Roxborough. "Our hearts break for Andrew and Zach. We hope that they trusted us that we did everything that we could."