We tried it: A kettlebell-infused barre class in Manayunk

By Bailey King
PhillyVoice Staff
Fitness We Tried It
from 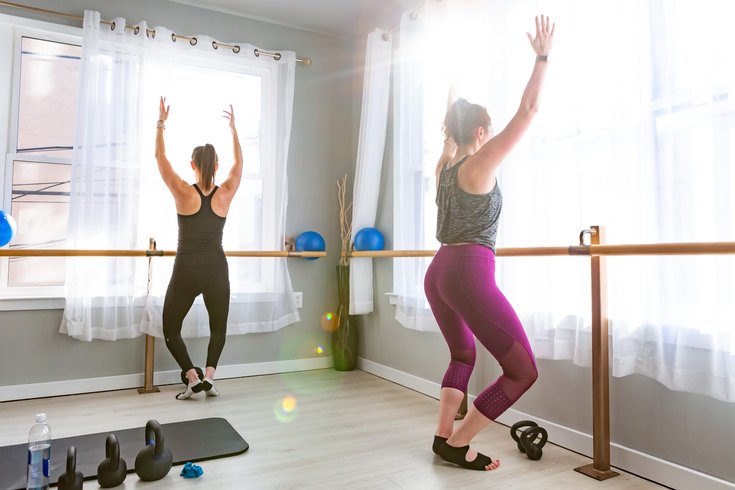 Kettlebarre is the newest addition to The Wall Cycling Studio's 30-plus weekly class schedule.

2019 is, undoubtedly, the year of the kettlebell in Philadelphia.

Coming after KTL, the kettlebell gym that opened in mid-December and closed two months later, Manayunk’s The Wall Cycling Studio has added the weighted bells to its roster for the new year.

Kettlebarre is the brainchild of The Wall’s founder and owner, Juliet Sabella. The legitimately trademarked workout is the newest addition to The Wall’s cozy and light-filled second-floor barre studio and builds upon their already shake-inducing classes.

It's not the first time The Wall has upped the ante when it comes to barre classes. The studio also boasts classes dubbed Bardio Scuplt, a high-intensity barre class, and Booty Barre, which focuses on lower body moves while incorporating arm work.

RELATED READ: We tried it: Summit Acupuncture in Old City

Actually, The Wall is a studio that mixes it up all the time — in a very on-trend manner. It added TRX training to their lineup about a year-and-a-half ago, now the kettlebarre, and Sabella says she has plans for the future, including a rebounding class, appropriately named “Barre Tramp.”

Kettlebarre is also pretty much exactly what you’d imagine it to be, though after my workout there I'd suggest that newcomers can't anticipate just how sweaty, exhausted and shaky they’ll be by the end of class.

Before class, Sabella made sure that I'd nailed my form, since it is crucial in a kettlebell workout. There’s a “hip hinge” that’s an important component of many moves, including the ever-popular kettlebell swing. But the emphasis on form will carry through the entire class. 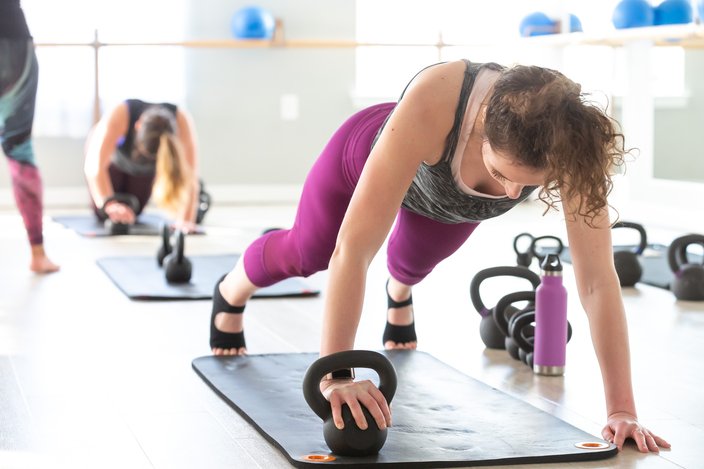 Kettlebell pushups made for a challenging variation on the classic strength-training exercise.

Sabella kicked off class with a challenging warm-up comprising an inch worm and chatturanga combination move and downward dog push ups — a warm-up that would be fitting for any “normal” barre class. We then moved into incline push-ups with one arm on the kettlebell for six total sets — three sets on each side, with a 30-second plank between each set. 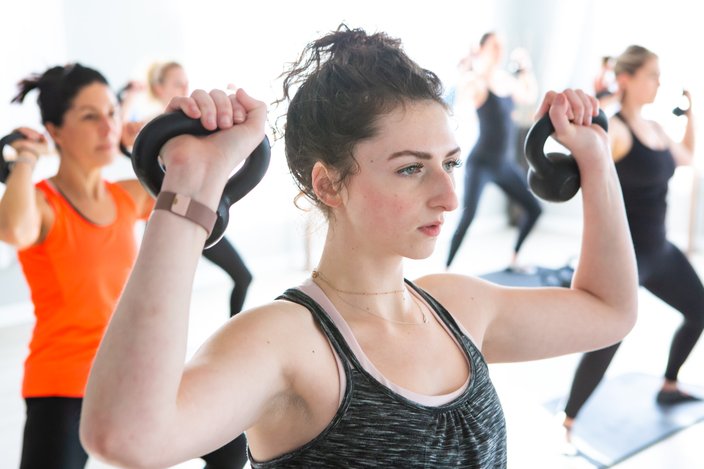 Now, probably 10-plus minutes into class, we were warmed up and ready to dive into some kettlebarre. We started to incorporate the kettlebells in an arm series that a normal barre class would use light dumbbells. Instead, we used five-pound mini kettlebells for bicep curls, upright rows and overhead presses. Barre-lovers know how much of a burn “light” weights can provide in these moves. 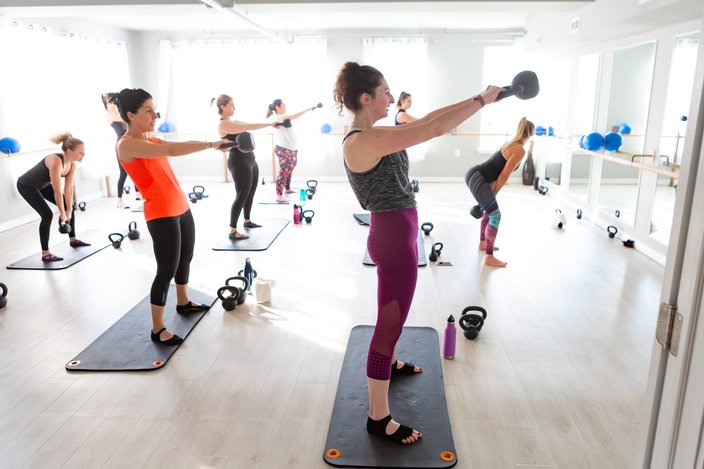 Enter the kettlebell swing. We did sets of 25 swings at a time with the heaviest weight we had — ranging from about 15 to 25 pounds, depending on the person. At this point, we also incorporated kettlebell deadlifts. For both the swings and deadlifts, Sabella was constantly calling out form cues to ensure everyone’s safety. 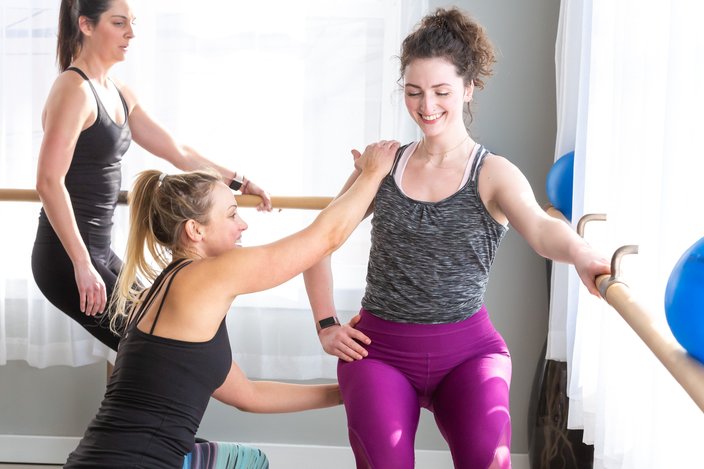 Kettlebarre is exclusively taught by The Wall's owner, Juliet Sabella.

Then, we took it to the barre — the workout’s namesake — and cycled from a few moves there to 25 kettlebell swings on our mats and then back to the barre. It was exhausting. 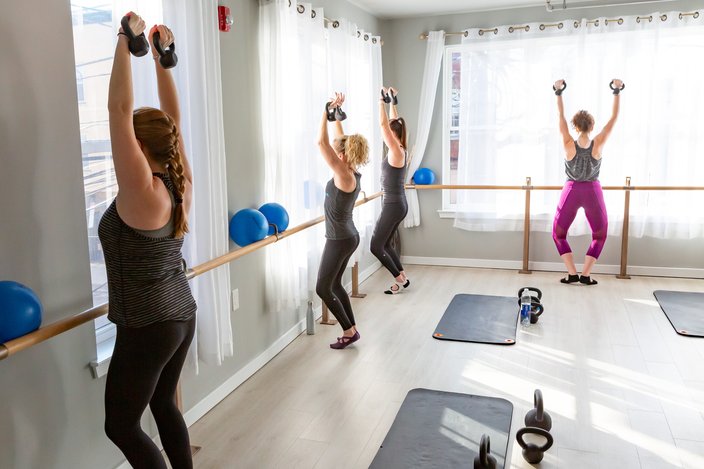 Class participants lift kettlebells above their head during the full-body workout at The Wall Cycling Studio in Manayunk, PA.

At the barre, we started off weight-free to work the glutes and quads with those notorious little pulses that leave your legs quivering. We then did a few sets of swings and found ourselves back at the barre for another arm series including overhead presses and bicep curls — all done while on your tiptoes, another barre torture method. 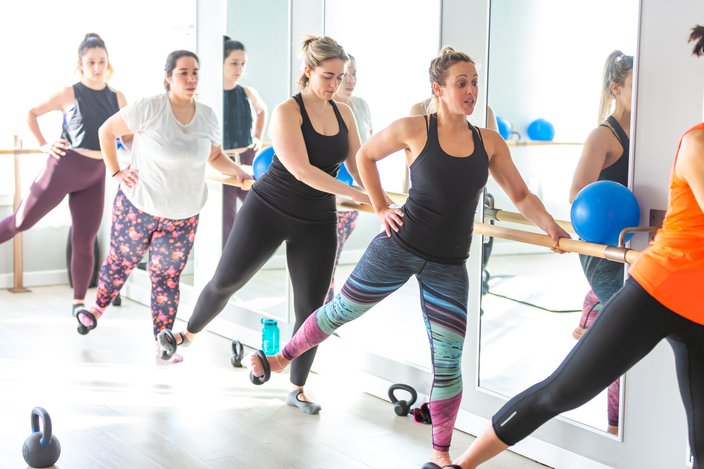 Leg lifts are no stranger to any barre class, but done with kettlebells on your foot they are a whole different experience. Tiny pulses and one-inch lifts done with a five-pound kettlebell turns an exercise that already targets the lower butt into an extra-challenging move. 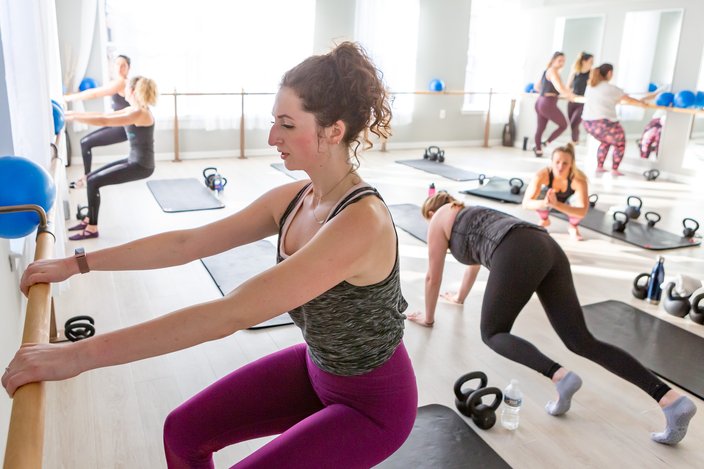 Sabella ended class by splitting us into two groups on each side of the room. One person from each side *attempted* to bear crawl — a very difficult primal move that involves alternating your legs and arms in a elevated table top position. Each person did a trip up and down the room and, in a relay-style-manner, the next person on each side would go. While each “team” was bear crawling, everyone else would be doing a move at the barre like the holding chair pose, pulses and more.