Kevin Cooney: If (or when) the Phillies fire Kapler, who should take over as manager?

Here's a trio of names that could help turn this team around — if any would be willing to take the job... 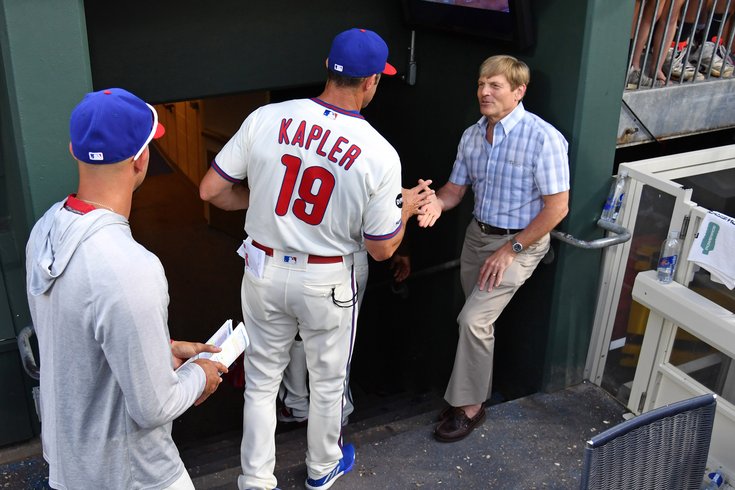 Philadelphia Phillies manager Gabe Kapler is greeted by owner John Middleton after losing to the Miami Marlins in the season finale at Citizens Bank Park.

Eight hundred and ninety-one miles from the home clubhouse at Citizens Bank Park — against a red wall in a Busch Stadium lobby and standing awkwardly next to one another — Joe Maddon and Theo Epstein officially announced their divorce early on Sunday afternoon. The man who lead the Chicago Cubs to their first World Championship since Teddy Roosevelt was President found out that the grace period for a once-in-a-lifetime championship and three appearances in the sport’s final four in five years is three seasons.

At Globe Life Park in suburban Arlington, Texas – a mere 1,477 miles from South Philadelphia — Buck Showalter was sitting in a visiting television booth for the YES Network on the final game at the home of the Texas Rangers.

Somewhere in TV Land, Joe Girardi was likely sitting in a studio to watch Game 162’s contrived, all-at-once madness as one of the game’s signature moments.

Almost at that same time, Gabe Kapler was, most likely, preparing for his final game as Phillies manager. The sweepstakes about which one of the glitzy names listed above will be the next one to redecorate the manager’s office – unless they somehow prefer a standing desk and pictures of Einstein on the wall — is about to start.

At 6:00 p.m. on Sunday — against the faded twilight of a warm autumnal afternoon that had turned into evening, and with a ballpark that was still more than half filled for Andrew Knapp’s final flail at a Tyler Kinley pitch — the 2019 Phillies passed into history following a 4-3 loss to the Miami Marlins.

The end arrived not a moment too soon. It came by losing a 10th game to a Marlins team who has just 57 for the year. It came with a starting lineup that had the names Andrew Knapp, Sean Rodriguez and Blake Parker written in ink on it. It came with a second 81-81 mark for a team that hasn’t been north of that mediocre standard since 2011 by even a game.

This wasn’t an ending as much as divine mercy.

“I’m not sure I’ve ever been prouder of a group of men than these guys,” an almost weepy Kapler said as he began the post-game press conference with a poor man’s Dick Vermeil impression.

That doesn’t change the fact that a lot of money was sank into a team that ultimately went under for the second straight year. And when that happens, it is almost always the guy is that office who takes the fall. Barring John Middleton throwing a huge curveball that takes Matt Klentak and Andy MacPhail out as well, it will likely be Kapler alone among the power brokers of the franchise that pays the price for this failure.

That is the power of the ticket buyer. This will be a bottom-line decision most likely and those people have — with the empty and unused seats that littered Citizens Bank Park the second half of the year — made it known they won’t come back in anywhere close to the numbers they did in 2019 if Kapler is the manager in 2020. Managers may not sell tickets, but they sure as hell can prevent people from buying them.

The question that the Phillies have to answer now is do any of the names listed above really make a difference with a roster that doesn’t just need a tweak, but an overhaul? They have placed themselves in a position where they believe they are right there, but the facts are that they aren’t really all that close to the Braves and Nationals. Does an expensive manager – one that gets headlines, which is something that this organization has never done — really change that dynamic?

A lot of the things that drive people nuts about Kapler — his never-ending positivity, his quirky in-game moves, the constant need to be the smartest guy in the mood — are basically found behind Maddon’s coke bottle glasses. The difference is that Maddon can flash a ring, a few division titles and it makes it far easier to try things his way. No matter where the guy has gone, he has won.

The same can be said for Girardi, whose most impressive job wasn’t with the Yankees' high payroll but with the 2006 Marlins team that improvised after a fire sale and earned him a National League Manager of the Year award. Of course, he was fired immediately afterwards because Jeffrey Loria makes Daniel Snyder look sane.

If you want a best fit, however, it might be Showalter. There is a clear shelf life in his approach, but that also times with what the Phillies need. They need a guy who can take a team and make a sudden leap. And when you look at Showalter’s previous four stops — Yankees, the expansion Diamondbacks, the Rangers and the Orioles — there were significant leaps forward in a short amount of time. That fact and the previous relationship he had with MacPhail in Baltimore makes him a guy to seriously watch.

MORE: Paul Hagen: Should Kapler be back? And other random season-ending Phillies thoughts

What do the Phillies have right now? A general manager who appears on the firing line even if he survives this moment. An owner who is demanding a winner immediately. A roster with severe flaws. A division where you are as likely to finish fourth as you are second at this point. A fan base that has run out of patience. Each one of them are likely to add another set of dollars onto the final number of the check. And throughout its history, the Phillies have never been known as being the team who writes that big check to its manager.

San Diego is far more attractive with the Padres farm system and its never-ending summer straight out of a Beach Boys album cover. The Giants are a stable organization that may be changing but will likely give its new manager a lot of rope. The Cubs are likely to turn to a more low-key guy, but there’s still a nucleus that won a World Series and made the playoffs the last four years. While other openings may not be close to as glamorous — the rebuilding efforts of the Pirates and Royals, for example — they won’t nearly come with the same stress that Philadelphia carries.

No matter who comes into town to replace Kapler, this is an organization that needs to self-examine what exactly it is doing. This decade began with them as the royalty of the sport off two straight World Series appearances and the signing of Roy Halladay. Now, it is a symbol of, at best, mediocrity.

It will spend its eighth straight year watching October baseball from the couch with no clear arrival date on when that will change. Worse than that, it seems way too often publicly not to care about that fact, or the idea that the mindset that has seen the spinning of the wheels in the 75-to-81-win mud pit is just digging the trench deeper.

The Phillies may have spent this final day of 2019 hundreds of miles away from where its 2020 manager was located. Then again, that distance felt a lot shorter than the distance they are from being relevant in the sport’s hierarchy.