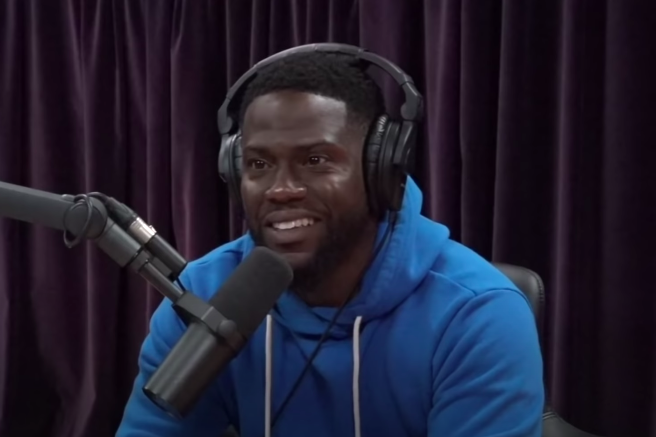 Kevin Hart discusses his recovery from a car crash that nearly left him paralyzed while appearing on the "Joe Rogan Experience" podcast Monday.

Kevin Hart likened his comeback from a car crash that nearly left him paralyzed last September to that of Rocky Balboa.

Appearing on the "Joe Rogan Experience," the Philly native said he's about 98% back to being his former self. But he's still going to physical therapy and receives occasional massages to aid in the healing process.

"If I can continue to outdo me from the day before, then I am ahead," Hart said. "That’s the newfound energy that I got out of life now. I’m on this amazing ‘Rocky’ story with myself – it’s in my head. Nobody else is watching this movie but me. This is 'Rocky.' This is the comeback. I’m going to come back better than ever."

Hart was hospitalized after the driver of his 1970 Plymouth Barracuda lost control of the vehicle on Mulholland Highway in Los Angeles and went down an embankment.

The comedian said his spine had to be fused together with eight screws. Hart admitted he pushed himself too hard after surgery. He even lied to the hospital staff about his pain levels so he could keep exercising.

"I lied in the hospital because I didn't want them to know that I was having pain, because I thought they would stop letting me try my walks," he said.

He also added that refused to take medication, because his father was a drug addict. "Every night was a horrible night," he said.

Still, Hart's longtime exercising habits that may have helped him bounce back as quickly as he did. If it hadn't been for the strength in his core and upper body muscles, he said it's likely he would have been paralyzed.

“The doctor looked me in the eyes and said, ‘You’re lucky to be walking,'" Hart said. "'If your core wasn’t in the shape that it was and if you didn’t have the strength to take whatever that impact was and stay — you would’ve been snapped. You would never be walking again.'"