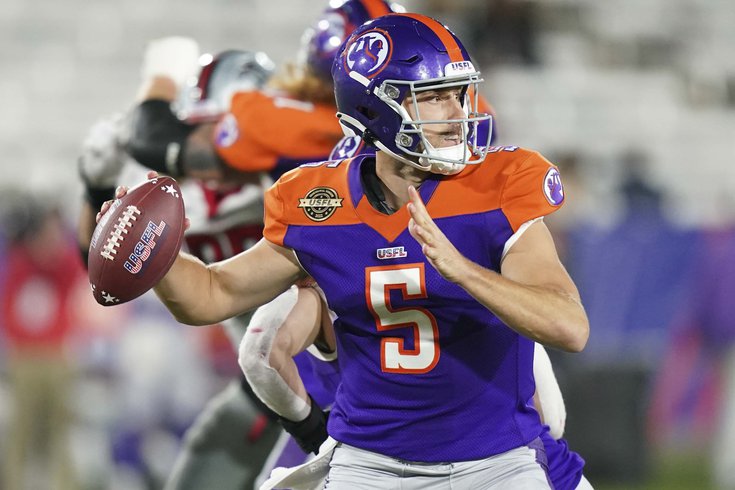 Kyle Lauletta is not willing to let his NFL dreams die.

In late-March, Kyle Lauletta found himself on a seven-hour journey to another journey, driving from Jacksonville, Florida, to Birmingham, Alabama. Lauletta, the 2013 Downingtown East High graduate and former University of Richmond star who was the New York Giants’ fourth-round pick in 2018, found himself part of a migration of football players looking for additional chance to reach the NFL.

That’s what this second incarnation of the United States Football League (USFL) is all about.

Lauletta, 27, was the seventh overall pick in the USFL Draft by the Pittsburgh Maulers, after bouncing between the Jacksonville Jaguars for the first 14 weeks of the 2021 season and finishing up under St. Joe’s Prep grad and 2020 NFL Coach of the Year Kevin Stefanski and the Cleveland Browns for Weeks 15, 16 and 17 before being cut the last week of the season.

The USFL just kicked off its 10-week regular season, which Lauletta is hoping turns into a 10-week NFL audition, like every player in the USFL.

The 6-foot-3, 222-pound quarterback was the Eagles’ practice squad quarterback during the 2019 season and signed by the Eagles on January 6, 2020, a reserve/future contract. He finds himself joined by another former Eagle, Clayton Thorson, the Eagles’ fifth-round pick in the 2019 NFL Draft, who, ironically, was beaten out by Lauletta and is now the starting quarterback for the Houston Gamblers.

One thing is certain: This USFL, other than the team names and colors, is in no way like the previous USFL that played from 1983-85. That USFL played in front of hometown stadiums and featured future Hall of Famers Reggie White, Sam Mills, Jim Kelly, and Steve Young. This USFL plays its games in empty Protective Stadium and Legion Field. The games have been fun and competitive, with a high-level platform with both Fox and NBC broadcasting its games.

This USFL also provides an inside look at football that no medium previously had access to, giving inside glimpses of the field through helmets cams and live sideline audio. The numbers have been decent, too. In the USFL debut weekend on April 15-17, NBC and Fox split 2.95 million viewers and the Maulers-Philadelphia Stars game garnered 1.056 million viewers on Fox, which combined with the USFL’s other games this weekend, faired better than Premier League soccer coverage on NBC and the NHL on ABC this past weekend.

Lauletta, like every player in this USFL, is counting on this version to work.

“It’s all about moving the ball and looking good, which translated into winning,” said Lauletta, a new father of a baby girl. “I’m looking for the chance to show what I can do. I need to light it up and perform at a high level. If I play within myself, and everyone can showcase their talents, the NFL will notice you. That has to be the priority of everyone in the USFL. The goal in any team sport is to win it all and when you win, people notice. I think the timing of the league works.

Various sources connected to the USFL said the salaries in the league range from $45,000 to $120,000, with the winning USFL champion receiving $10,000 per player. USFL quarterbacks are receiving the lions’ share, averaging six-figure sums, while the remaining players are getting $45,000, or an average of $4,500/per game, according to sources.

“There are no other options right now, and you have guys just dying to play football and looking for their chance,” Lauletta said. “The players have input to the players drafted and the systems. It gives you a real ownership of what’s going on. I would say the playing level equates to NFL pre-season football. Most of the guys in the league have played in the NFL.”

Rosters are small, with 38 players per team.

“Injuries will play a part in how this season shapes up,” Lauletta said. “This is the perfect opportunity of applying everything I learned in college and with the five NFL teams (Giants, Eagles, Falcons, Jaguars and Browns) that I’ve been with. I’m 27, and that’s young, but I will be one of the older cats in the league. I’m excited to see where this goes and I know I’m getting paid to do this, but it’s been super, super fun.”

So far, Pittsburgh Maulers head coach Kirby Wilson, an 18-year NFL assistant coach, has opted to use Josh Love, who was drafted in the 12th round, as his starter. The Maulers are 0-2 and Love has thrown for 357 yards, with two touchdowns and two interceptions.

“This league is all about fighting for your chance,” Lauletta said. “I’m not going to stop fighting for my chance. In the meantime, you be a leader and be there for your team and teammates. It doesn’t mean you give up your dreams. Yeah, this is like new life for guys like me.”