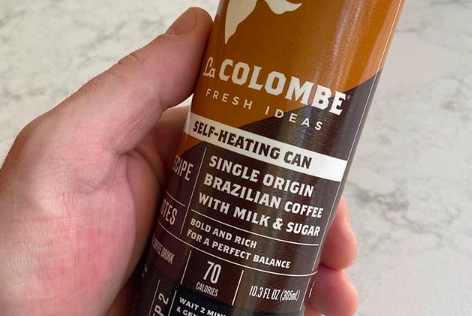 La Colombe will sell a limited batch of its self-heating, coffee cans, available in Brazilian and Brazilian Milk+Sugar flavors, at its flagship coffee shop in Fishtown.

If you've ever wanted to instantly heat up coffee on the go, but you don't want to buy a cup from somewhere nearby, La Colombe may have your highly niche, consumer preference covered.

The company is testing out a limited trial of its new self-heating can exclusively at the coffee shop's flagship location in Fishtown. There are no plans at this point to sell it at the fictional Latte Larry's from HBO's "Curb Your Enthusiasm," which touched on this very idea in its most recent episode.

What's that in our CEO's hand? Introducing the latest from our Fresh Ideas innovation line - the self-heating coffee can. Activated with one twist, it will heat in 2 min for your on-the-go hot coffee enjoyment. Once you’re done, please recycle as you would a Draft Latte. Perfect for long car rides, camping trips, or whatever you want it to be perfect for. Available in Brazilian and Brazilian Milk + Sugar exclusively at our Fishtown cafe. (📷: @todd_carmichael)

La Colombe developed the new product, available in Brazilian and Brazilian Milk + Sugar, in partnership with HeatGen. The company's proprietary heater – attached but isolated from the beverage – creates a flame-free, chemical reaction that heats up drinks without fumes, smoke or liquid.

With a twist of the heater, the coffee warms up to about ~130°F in just two minutes.

"We are always in search of what coffee can become and that is something that continuously drives us," La Colombe CEO and co-founder Todd Carmichael said. "At La Colombe we believe that nothing is ever finished."

The limited-batch beverage is part of La Colombe's Fresh Ideas program, which is run out of the company's Philadelphia-based research and development innovation hub. The product is in the testing phase and could potentially be sold more widely if the reception is positive.

"For the past 25 years we’ve had a very simple mission – to make people happy with coffee," La Colombe president and co-found JP Iberti added. "Now, our goal is to take the beauty of the cafes and the taste of perfectly crafted coffee on the road. We are freeing the cafe menu and making it available to everyone."

The timing of the release lines up perfectly with Larry David's quest for a coffee mug — not a thermos — that can prevent the contents from going cold, thus giving his spite store a competitive advantage over rival Mocha Joe. Instead of consulting German inventor Boris and his suspiciously Nazi-leaning dog Adolf, Larry should really consider getting in touch with HeatGen.

If none of that made sense to you and you're still intrigued by the self-heating coffee can, get over to La Colombe in Fishtown while supplies last.