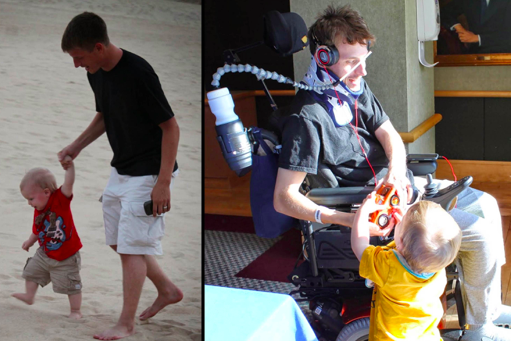 These photos show David Williams, of Centre County, before and after the truck rollover in November 2011.

A landscape service worker severely injured when his company truck rolled over five years ago will receive the largest settlement amount ever agreed upon in a Philadelphia County personal injury case, according to his lawyers.

Williams suffered a fractured spinal cord that required several surgeries and left him a quadriplegic when the TruGreen truck he was driving rolled over in November 2011 while he was driving along a highway in Clinton County. He and his wife, Jaimi, a co-plaintiff, alleged the rollover was caused by a bald tire left unrepaired by the defendants, even after failing their own inspection.

Williams, who spent several months at Magee Rehabilitation Hospital in Philadelphia, requires consistent nursing supervision throughout the day, his lawyers said. That includes the need to be awakened and repositioned in bed several times during the night.

Williams' lawyers estimated his lifetime medical expenses will cost millions of dollars. He has three children.