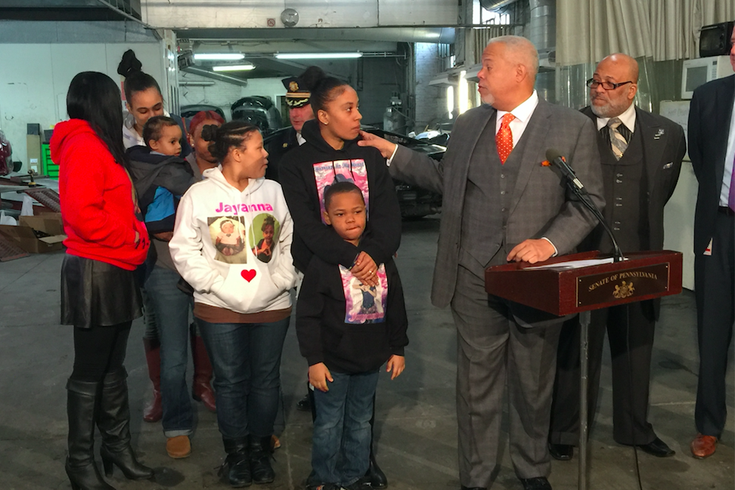 Hit-and-run drivers in Pennsylvania could have a significantly more difficult time eluding capture by year’s end.

There, they announced their support for the “Jay Alerts legislation” that Williams plans to introduce this week.

If passed, that legislation would send hit-and-run notifications out on the state’s Amber Alert system and legally require auto-body shops to tell law-enforcement agencies if a vehicle matching the description has been brought to them for repairs.

Seeing Jayanna’s family take their grief and use it to help other families avert their pain, Williams said, was the “most moving moment” of a career spanning more than 20 years in office.

On November 18, 2016, the 8-year-old girl was walking home from Lewis C. Cassidy elementary school with her three siblings when she was struck by a hit-and-run vehicle at 63rd Street and Lansdowne Avenue.

The driver, who has since confessed, wouldn’t be found until a tip led police to the Chester County body shop where the car was taken for repairs after the crime.

Both facets of the case led Jayanna’s mother, Ayeshia Poole, and aunt Jasmine Hawkins to approach Williams with the idea that led to the “Jay Alerts” legislative package.

Williams – who is still seeking a Republican co-sponsor – said he’ll also take the unusual step of approaching Gov. Tom Wolf’s office in pursuit of pre-emptive support. He said having the District Attorney’s Association and PennDOT already on his side will help with lobbying effort.

“We just don’t want to see any other family go through the pain I’ve seen my sister and her children go through." – Jasmine Hawkins

“Within this year, we’ll see the bills become law,” he said optimistically, at Ren’s Auto Repair and Collision, near 46th Street and Baltimore Avenue. “This is a significant day. I’m moved by the moment.”

Williams based that optimism on the fact that the matter at hand isn’t controversial or partisan, and taps into the existing Amber Alert infrastructure to get up and running.

In addition to expanding the state’s current system to include hit-and-run advisories, information about the vehicle’s make, model, year and color would be provided to body shops along with, if available, the license-plate number, unique identifying characteristics and extent of the damage.

While it would be new to Pennsylvania, there is precedent for a “Jay Alert” notification system. In 2014, Colorado Gov. John Hickenlooper signed a bill into law that established a “Medina Alert” that performs a similar function.

That notification system – which came after a 21-year-old valet driver named Jose Medina was fatally struck by a hit-and-run driver in Denver – has resulted in several arrests.

“Few things are more important than investigators getting good information in a timely manner,” he said.

Sporting a memorial sweatshirt, Ayeshia Poole told the assembled crowd that alerts would go out on television, radio and mobile phones in cases like that which killed her daughter. She was particularly keen on the body-shop notification aspect of the legislation.

“With ‘Jay Alerts’ in place, it will allow us all to be aware and on the lookout” for hit-and-run vehicles, Hawkins said. “We just don’t want to see any other family go through the pain I’ve seen my sister and her children go through. No one should ever have to bury their child, bury anyone, because of a hit-and-run.”

Captain Joseph Bologna of the 19th Police District has been in close touch with Jayanna’s family throughout their months of grief. He said Tuesday that this sort of legislation could help investigators get the information they need to solve cases that sometimes go unsolved.

“This is a win-win for everybody,” he said. “There is too much of this going on, especially recently. I have the utmost respect for this family. They don’t want to see this type of thing happen to other families. They’re celebrating Jayanna’s life and also helping others. It’s a testament to her memory, and her family.”