Attraction aimed at kids under 11 will open in Spring 2017 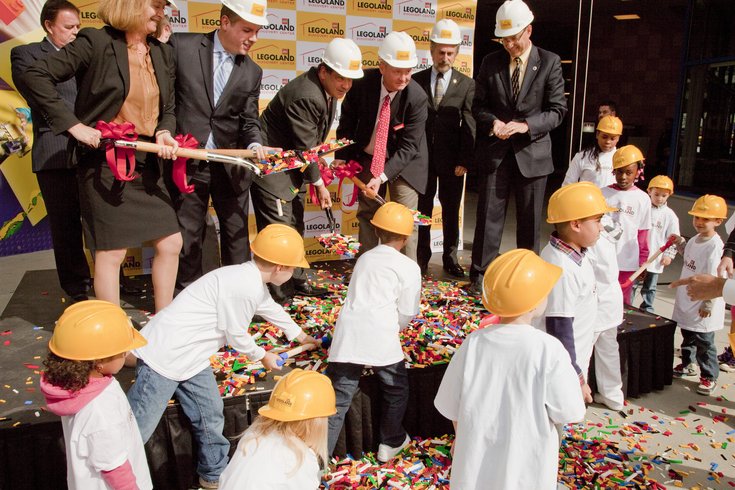 The groundbreaking ceremony for the Legoland Discovery Center in Westchester, New York. A new Center will open in Plymouth Meeting, Pennsylvania in 2017.

Everything really is awesome: the Plymouth Meeting Mall in the Montgomery County town is getting a 33,000-square-foot Legoland Discovery Center set to open in the spring of 2017.

As the mall's owner PREIT announced, the Discovery Center is a much smaller, indoor version of the popular Legoland theme parks, aimed at kids between the ages of 3 and 10. What PREIT is really hoping to attract are new tenants that would cater to these youngsters, like toy stores and children's clothing boutiques. Plymouth Meeting hasn't seen sales as strong as PREIT's other retail properties, like the Cherry Hill Mall.

Attractions include play areas, party rooms, a 4D cinema and master building classes, plus a Miniland with LEGO sculptures of Philadelphia-area landmarks. Folks will get to vote on which landmarks get featured later in the year (can somebody say "LEGO Rocky Statue"?)

It's the ninth Discovery Center in the U.S. and the only one in Pennsylvania. Like the Legoland resorts, it will be owned and operated by British company Merlin Entertainments.

The new attraction won't be the only construction drivers can spot from the Pennsylvania Turnpike. As Philly Mag reported, Keystone Property Group announced last week that it will redevelop the One Plymouth Meeting office building, right next to the mall. Adding more windows will be a key element of the makeover; one can only imagine how often office workers will look out to the Legoland Center, sigh, and wish they were kids again, playing with toy bricks.